The Labour leadership candidates set out their stall at a hustings at the Grand hotel in Brighton today (Saturday 29 February).

Party members from Brighton and Hove and beyond quizzed the three candidates still in the race to replace Jeremy Corbyn about their vision and their policies.

And they also heard from and put questions to the five candidates for the deputy leadership, vacated when Tom Watson stood down at the general election in December.

Leadership hopefuls Sir Keir Starmer, Rebecca Long-Bailey and Lisa Nandy all talked about the need for unity to enable Labour to build a better, fairer and more equal society.

Sir Keir said: “We lost the trust of the British people as a party of change. Mr Johnson is dangerous. He is no clown. We need to be relentlessly focused on winning the next general election.”

Ms Nandy said that nurses and ex-miners had voted for the Tories, having returned Labour MPs for a hundred years.

She blamed unemployment, high house prices, debt and air pollution and said: “People need to believe in politics that will transform their lives again.”

Mrs Long-Bailey said that the Labour Party had rebuilt Britain after the Second World War and founded the NHS.

She said that councils had to build more homes and privatisation had to be stopped. Labour’s guarantee, she said, was that “your children’s lives will be better than yours”.

Sir Keir said: “We need to win back the trust of the public. People in their hearts know inequality has gone too far.”

Mrs Long-Bailey said that the essence of human nature was a decent standard of life and the green industrial strategy.

“We must empower our members to be our cheerleaders in our communities. The Labour Party is about realising aspirations wherever you’re from.”

Sir Keir said that he and the voters in his London constituency voted to remain in the European Union in the referendum in June 2016.

But, he said, after the referendum he spent a lot of time with leave voters to understand their point of view. He said that people told him they wanted better infrastructure and transport, jobs with dignity and decisions made closer to home.

He said: “It’s a compelling story about change that, I think, takes us a long way forward.” 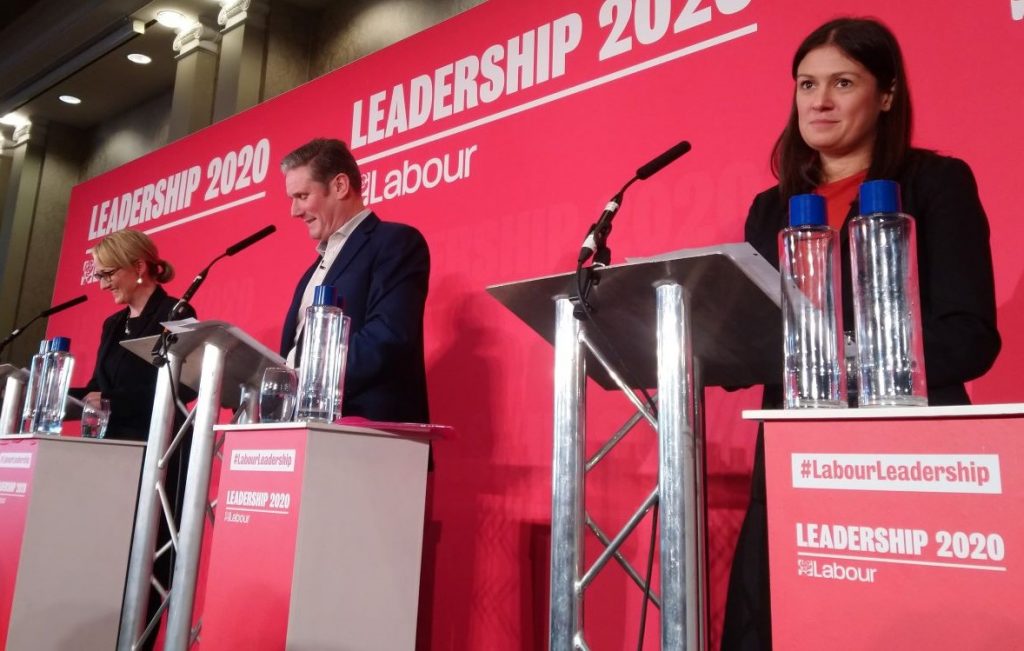 All the candidates were concerned about press freedom and smears against the Labour Party.

Sir Keir said that independent journalism was under attack while Ms Nandy said that the BBC should be mutualised to make it more accountable.

All the candidates agreed that Labour needed to win seats in Scotland again if it is to win a majority at Westminster. It currently has just one.

Ms Nandy argued most strongly to keep the union together. She said: “The SNP fought a ‘once in a generation’ referendum and we need to hold them to that.

“We want to see a party that stands up for working people. We need to fight for the UK. People in Scotland need far more power far closer to home.”

Mrs Long-Bailey said that she would campaign vigorously against Scottish independence but couldn’t guarantee the outcome.

Sir Keir said that he would work with Scottish Labour and not impose policies from Westminster.

The candidates also discussed the economic settlement, inequality in our wealthy society, homelessness and problems such as waiting times for child mental health assessments.

Sir Keir said: “We need to have the courage to say our economic model is busted, it’s not delivering and we need to change it for a different economic model.”

And Ms Nandy said: “We may not be in power but we should never believe we are powerless.

“Do not sign trade deals with countries who don’t sign up to the Paris agreement (on climate change).”

Mrs Long-Bailey summed up the discussion at the hustings by saying that for many people pay was too low, bills were too high, housing was too expensive and homelessness was getting worse.

She said: “The solution is not to retreat and despair. It’s to offer hope – aspirational socialism, an industrial revolution.

“We forge our path to power not by weakening our aspirations but by realising them.” Mrs Rayner said that Labour needed to talk about everyday socialism, promote peace not war and save the planet from climate change.

She said: “We don’t have to pander to the racists to win in northern seats.”

Mrs Butler, when asked who was her most inspirational figure, said her late father, who worked on the railways.

He could not be an official trade union steward because of his colour, she said, but her father had told her: “Never walk on the other side of the road.”

Mr Burgon said that, as deputy leader, he would be campaigner in chief and organiser in chief.

He said that there would be no return to immigration controls, Tory austerity or strikes and Labour would be democratic, member-led, internationalist and anti-war.

Mr Murray said that Labour was an internationalist party. He said: “Let’s not throw our principles away. Scots don’t want another referendum. Why should we facilitate the means if we don’t agree with the ends like Mr Cameron did when he called for the EU referendum?”

Dr Allin-Khan said that Scots were divided. She agreed with Mr Murray that Scotland should remain part of the UK.

Mrs Butler won the nomination for deputy leader from the Brighton Pavilion and Hove and Portslade constituency parties. Dr Allin-Khan was nominated by Brighton Kemptown.

Roz Scott is a freelance journalist and copywriter. For more of her work, visit www.rozscott.com.