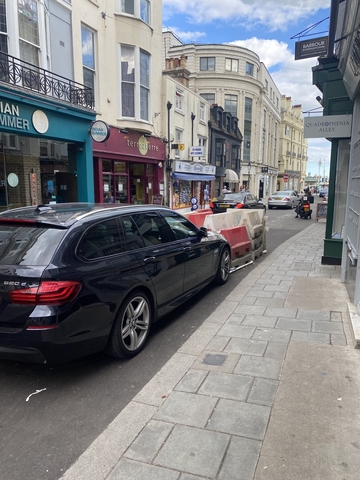 Drivers are parking cars on pavements widened to help with social distancing in the city centre.

Pavements were widened in June as part of the government-led programme, were ready for when more shops started reopening across the country.

East Street is also a pedestrian zone from 11am to 7pm Saturday and Sunday.

Green councillor Tom Druitt was contacted by a resident who shared photographs of barriers used to mark out the wider pavements moved out of the way parked cars on 27 June.

During the last weekend, drivers ignored the 11am road closure, and the social distancing barriers were “in pieces”.

The wider pavement area was full of signs, tables and chairs, which still require a highway licence, even though city councillors have agreed these should be free during the pandemic period.

Green councillor for Preston Park ward, Siriol Hugh-Jones was shocked to find vehicles parked up on the new wide pavements in London Road, on Friday 10 July.

She said: “Despite social-distancing restrictions becoming more relaxed, it is still advisable that we maintain a distance from those around us, for everyone’s protection and to restrict the burden on the NHS.

“The council has successfully applied for government funding for temporary measures to create more space for pedestrians and cyclists to move around the city safely.

“But the protections afforded by these measures are completely undermined when drivers simply use the expanded pavements as off-street parking.”

The city council received £663,000 from the Department of Transport’s Urgency Response Transport Action Plan, to pay for various temporary measures to improve “active travel” ie walking and cycling in the city.

Labour councillor Anne Pissaridou, chair of the Environment, Transport and Sustainability Committee said: “We have made a number of changes to help the city reopen healthier, safer and stronger, including new temporary cycle lanes and widening pavements.

“We are aware that there has been a recent issue with pavement parking in the city and have been issuing warning notices to vehicles parked on the pavement since the changes.

“Signs in the area will be replaced and any vehicles continuing to park there may be issued with a penalty charge notice.

“We all need to help each other through this time, so that the reopened Brighton and Hove is safe for everyone, so I would urge everyone to follow the guidance on the new signs and not to park on pavements in the city.”