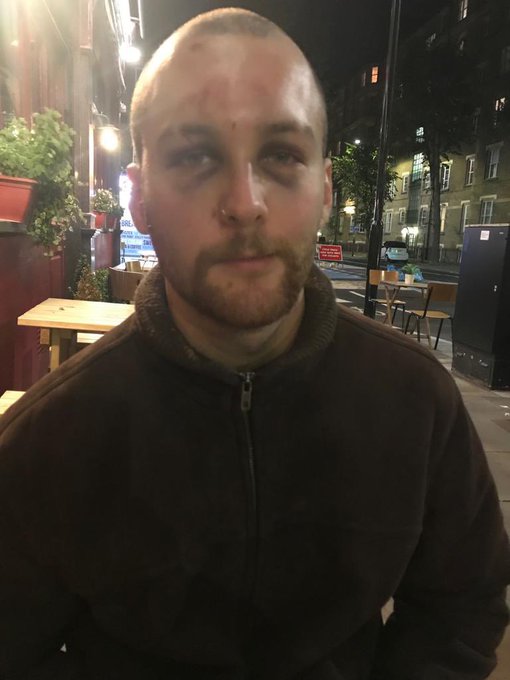 A man who was beaten unconscious and left with two black eyes was refused an ambulance – and then told police can’t investigate.

Jem Nash, 20, had just got off a bus in Western Road, Hove, in the early hours of Sunday morning when he was approached by two men.

His memories of what happened – and where – are vague, but he believes he was hit over the head from behind as he was on the phone to his girlfriend.

The attack left him battered and bruised and with two black eyes – just days before he was due to be best man at his sister’s wedding.

He said: “I was attacked by between two to four men who ended up kicking me in the face and stomping on my head on the ground.

“They left me there unconscious. When I eventually came to, I called an ambulance and then my phone died so I had to stumble around for help before these two women came out of their apartment to help me.

“They called 999 but I was refused an ambulance because it was not life threatening.

“They got me a taxi to hospital where I had to have a CAT scan to make sure I wasn’t bleeding on the brain.”

When he reported it to police, because his memory of what happened, who attacked him and exactly where it happened are so hazy, they said they are not able to investigate.

He ended up near the Freemasons Arms, but had stumbled for some time before the women found him.

Mr Nash, who works at the Signalman pub in Brighton, said he had called his dad and girlfriend from hospital but hadn’t wanted to upset the rest of his family.

But when his black eyes came out, he realised he would have to let them know ahead of his sister Ellie’s wedding to her fiance Harry Thatcher on Saturday.

But with the help of a pair of sunglasses, his injuries didn’t stop the day going with a swing.

Mr Nash said: “The more concerning thing is that I was refused an ambulance.

“My parents are telling me that I’m lucky I didn’t die.”

a South East Coast Ambulance Service spokesperson said: “We take any concerns raised seriously and invite Mr Nash or his mother to contact us so we can look into the circumstances in more detail.

“We were experiencing very high demand at the time of the call and prioritising our response to patients in a life-threatening or serious condition.

“We are very sorry to hear of Mr Nash’s experience and would urge anyone with any information to contact Sussex Police.”

His call records show that the call to his girlfriend ended at 5.15am and the women called him a taxi to the Royal Sussex at about 5.30am.

A spokesman for Sussex Police said: “Police have spoken to a man after it was reported he had been assaulted in the vicinity of Western Road, Hove, in the early hours of Sunday, 1 November.

“The 20-year-old sustained bruising and attended hospital where his injuries were assessed, and was later discharged.

“When speaking to police, the victim was unable to recall where the assault took place; anyone who can help with our enquiries is asked to report it online or call 101, quoting serial 324 of 01/11.

“Should we receive any further information regarding the location of the assault, we will consider reviewing CCTV.”