A former soldier who served in Afghanistan robbed a burger bar on Brighton seafront last summer, threatening to throw acid over the women working there.

He escaped with just £80 because the vast majority of diners had paid using contactless debit cards.

Rowan Hudson, 32, formerly of The Drive, Hove, and Spencer Avenue, in Hangleton, pleaded guilty to robbery – and to an earlier attempted robbery at a Brighton coffee shop – when he appeared before a judge.

But when he was brought for sentence from Lewes prison, he was “clearly agitated” in a way that prompted questions about whether he was under the influence of drugs.

Brighton Crown Court was told yesterday (Wednesday 17 February) that he was kept in a cell for at least 23 hours a day with no drug rehabilitation – or treatment for the post-traumatic stress suffered while serving his country.

Charles Drinnan, prosecuting, said that Hudson should be jailed, with a starting point of four years, according to the sentencing guidelines for robbery. The term should be between three and six years, he said, given the nature of the offences.

Mr Drinnan said that a mother with her child had confronted Hudson when he tried to rob Costa Coffee in London Road, Brighton, last August.

Hudson, who also previously lived in Mayfield Close, Patcham, dropped the till and fled but just over 90 minutes later, shortly before 1pm, he held up the Burger King in King’s Road, on Brighton seafront.

Again, he threatened the women working there, saying that he would throw acid over them if they didn’t give him the money in the tills.

He appeared to have a container, the prosecutor said, and the supervisor told police that “she really believed that he was going to throw acid over her”.

Hudson even spoke to one of the children in the burger bar, Mr Drinnan said, and one child was reported to have said: “Mum, we need to leave. He’s got acid.”

Mr Drinnan said that when Hudson was arrested, the police asked him whether he had taken drugs or alcohol and he replied that he’d had “shitloads”.

The judge said that the staff and customers must have been terrified and that these were “very serious and a desperate escalation from his previous offending”.

But Matthew Simpson said in mitigation that there was more chance of Hudson being rehabilitated – and staying off drugs – if he was given a suspended prison sentence.

Mr Simpson said: “Working in night clubs and working in security guard led to this situation.” 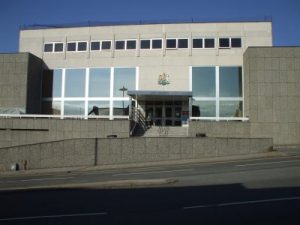 He suffered serious trauma in childhood when his step-father killed himself and again when serving in the Army in Afghanistan, Mr Skimpson said.

He lost his wife and access to his children – and the court was told that he had suffered episodes of psychosis and that he was not always stable.

Judge Barnes said that in sentencing Hudson, she had a duty not only to punish him for his crimes but to protect the public.

Mr Simpson said that treatment for his “huge drug addiction” was available in the community but not in prison and that this would be the best way to reduce the risk that he posed to the public, with the threat of a suspended prison sentence hanging over him.

Since his arrest Hudson had served six months in custody – the equivalent of a year’s prison sentence – Mr Simpson said.

As a result he had lost his home but his mother, who lived in Brighton, would take him in, Mr Simpson added.

Judge Barnes said: “When did you last speak to your mum?”

Hudson said: “Last week. I speak to her every week.”

Hudson said: “She just wants what’s best for me like everyone who loves me does. She said I could stay there.”

Judge Barnes said that if she imposed a suspended sentence and he so much as failed to answer the phone to the probation service, “you will be straight off to prison.”

She added: “Do I have your promise that you will go straight home to your mum?

“These were terrifying offences for those who were on the premises. Threatening to throw acid in the face of those women behind the counter is extremely serious. 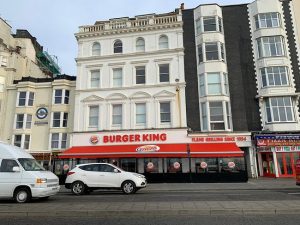 “You have had a traumatic life – as many do. But many don’t commit crime.

“I cannot ignore the serious trauma that you suffered as an eight-year-old, creating this rage in you.

“Serving your country from 2006 to 2013 is something that we have a huge respect for. You will undoubtedly have seen horrendous things in your service.

“You came out of the Army suffering from post-traumatic stress and lost your marriage and you haven’t seen your children.”

She said that she could “take an exceptional step” and that “keeping people in custody” was justified “only when it is absolutely essential”.

She imposed a two-year prison sentence suspended for two years and nine months of drug rehab.

The judge added: “This is a turning point for you … I’m giving you this last opportunity. Do not come back in front of me. There will not be another chance.”