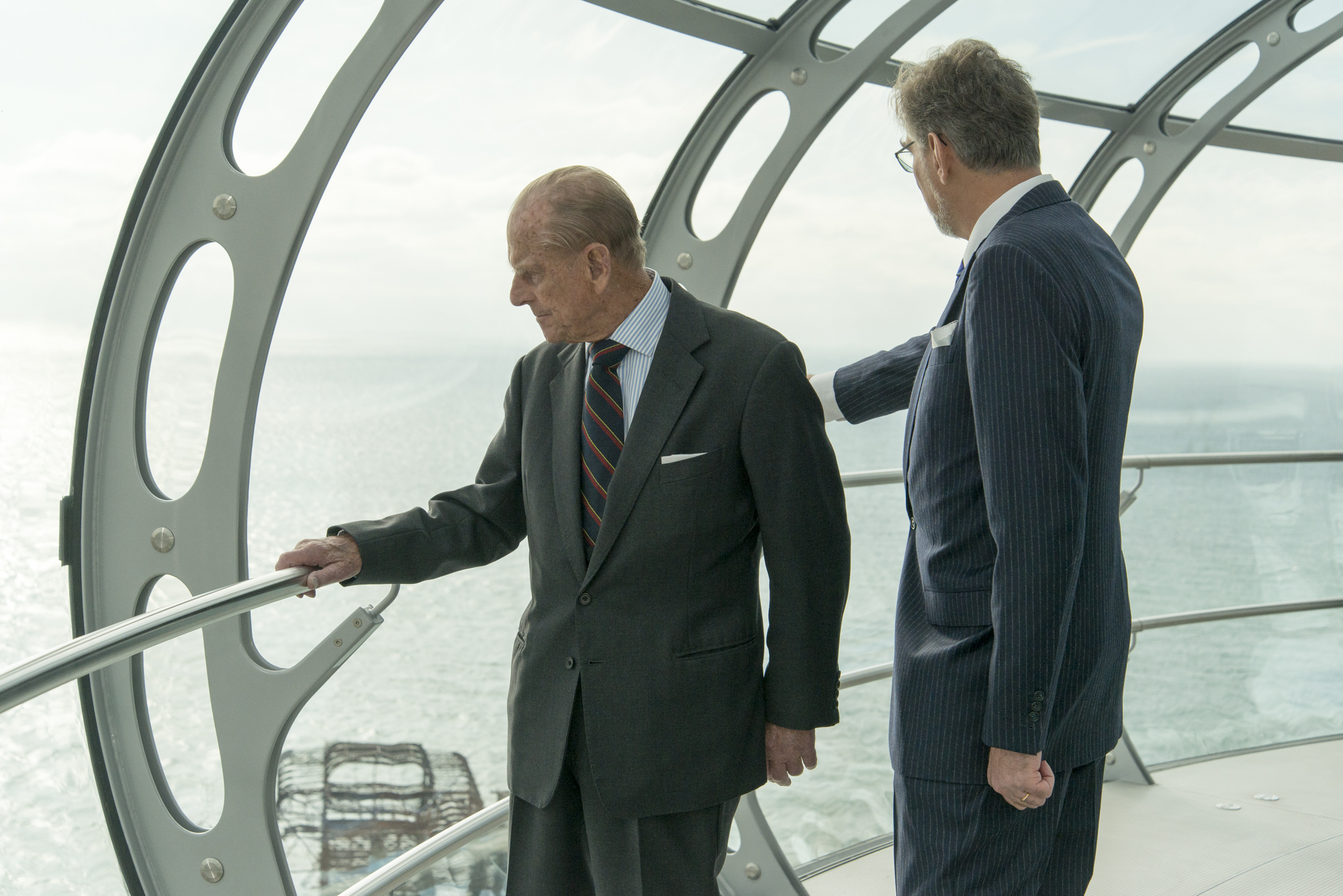 Prince Philip at the opening of the i360. Credit: British Airways i360

Public figures past and present paid tribute to Prince Philip as news broke of his death this afternoon.

The Duke of Edinburgh had visited the city – and before that, the two towns – on several occasions over the years, including the opening of the The Keep and Brighton Marina, the granting of city status to Brighton and Hove and lastly the opening of the i360.

The leaders of all three parties on Brighton and Hove City Council said in a joint statement: “On behalf of our residents, we would like to offer our deepest sympathies to the Royal Family on the passing of Prince Philip, Duke of Edinburgh.

“We recognise the Duke’s long service to our country and his dedication to Her Majesty the Queen.

“Our condolences to all who mourn his loss.”

Brighton Pavilion MP Caroline Lucas said: “I offer my sincere condolences to the Queen on the loss of her husband after 73 years and to the rest of the royal family who’ve lost a father, a grandfather and a great grandfather.

“He has been a huge strength and support to the Queen throughout her reign, as she herself has said on many occasions

“His decades of public service have been appreciated by so many. I think particularly of The Duke of Edinburgh award scheme, which made such a big contribution to connecting young people with nature and the outdoors.

“Like so many people across the country, my thoughts are with the Queen and her family today.”

Hove MP Peter Kyle said: “A terribly sad moment. Our whole community in Hove and Portslade will be thinking of the Queen at such a sad moment.

“Their marriage was remarkable, his service to our country unwavering.”

Former council leader Jason Kitcat recalled the time he met Prince Philip at the opening of The Keep.

He said: “I was introduced to the royal couple as Leader of the City Council, followed by East Sussex’s leader Cllr Keith Glazier. The Prince took a long hard look at both of us, then said with a wink ‘Do you two get along then or is this just for show?’

“Like school children pleading our innocence, both Keith and I swore we got on like a house on fire. We actually did get on well, which was unusual given our roles and politics. But the twinkle in the Prince’s eye made it feel like a special moment.

“This was one of the few occasions when I wore I tie, which caused much consternation in some quarters – astonishingly, from my minuscule collection of ties, I picked one that exactly matched HRH’s outfit. There were rumours I’d been tipped off, not so. RIP Prince Philip.”

And here we are on that day, sadly I don’t have a good pic with the Prince visible. pic.twitter.com/O2TWeexwf2

Police and Crime Commissioner Katy Bourne said: “I first met Prince Philip as a schoolgirl when he and the Queen came to open the Brighton Marina.

“He told us how he’d been stationed at our school during the war and shared our dismay at the walk along the half mile corridor to meals! I always loved his sense of humour. Such a loss.”

Sir Andrew Bowden, the former Conservative MP for Brighton Kemptown, said: “My wife and I were very saddened to learn of the death of His Royal Highness Prince Philip.

“It was my privilege to meet him on many occasions during my 27 years as the Member of Parliament for Brighton Kemptown.

“He was a great man who devoted his life to the service of the Queen and our country. Duty was the key to his life.

“In different circumstances, I believe he would have become Admiral of the Fleet of our nation’s Royal Navy.

“The hearts of the nation will go out to our great Queen, Her Majesty Queen Elizabeth II.”

The Bishop of Chichester Martin Warner said: “Our thoughts and prayers are with Her Majesty the Queen and with her family, on hearing the news of the death of the Duke of Edinburgh.

“Beyond the love and commitment of marriage and family life, Prince Philip has a been a remarkable consort in his commitment for nearly 7 decades to the demands of public life – a rock of support in good times and bad.

“Let us now give thanks for his steadfast love of the Queen, their family and the nation that he served with pride.

“May God grant to him rest and peace and a share in the glory of eternal life.”

The Roman Catholic Bishop of Arundel and Brighton Richard Moth said: “My thoughts and prayers are with Her Majesty and the Royal Family at this time of loss.

“Prince Philip has given extraordinary service to this country over many years and will be greatly missed, may he rest in peace.”

Former Argus reporter Bill Gardner, who is now at the Telegraph, shared this typically irreverent anecdote of the late prince.

My Prince Philip story. He asked me where I was from. “Brighton,”
I said.

“Well, you must be very seedy then,” he replied, and walked off.