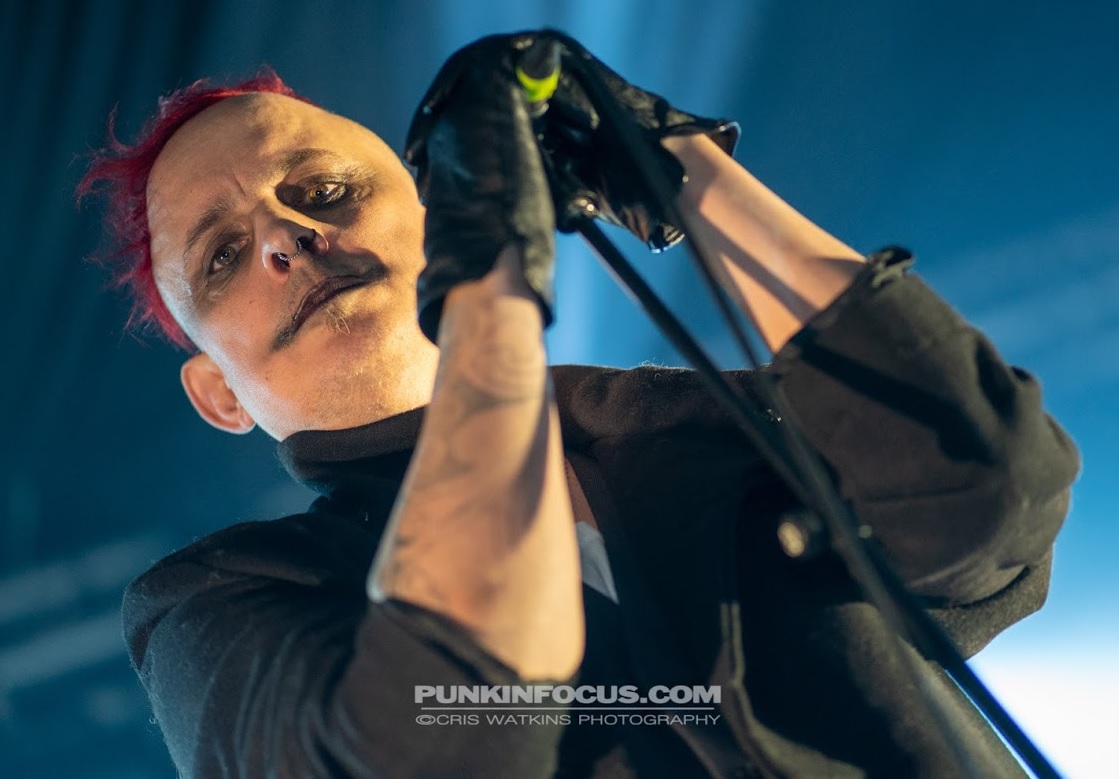 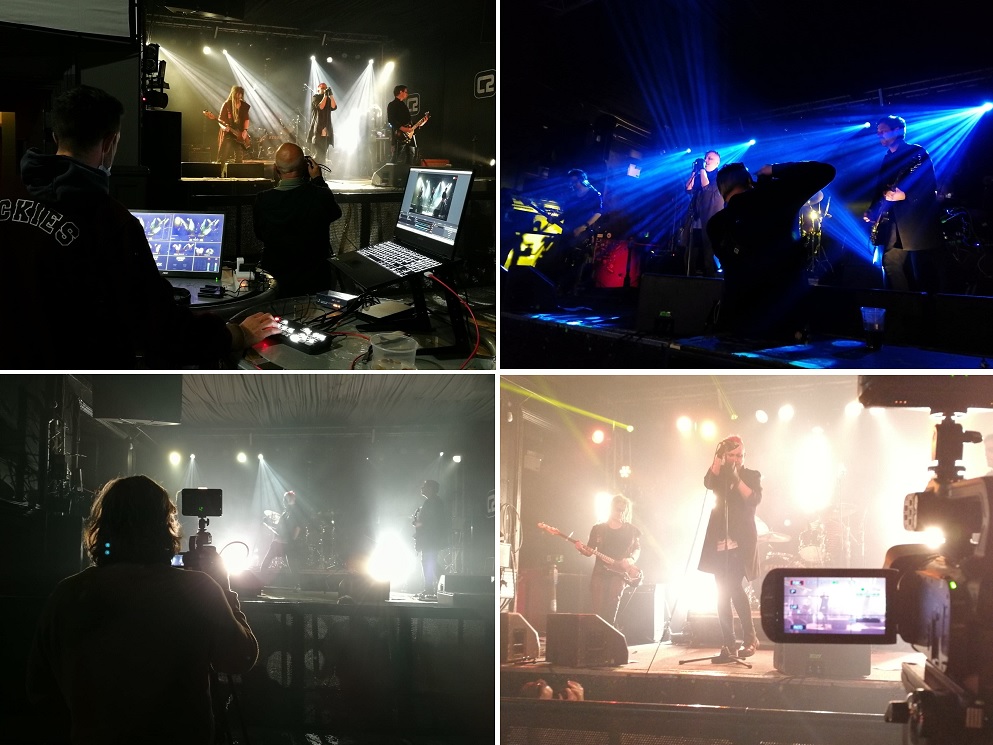 Behind the cameras at the Concorde 2 (pics Nick Linazasoro) (click on pics to enlarge!)

The venue itself remains shut to the general public until 18th May, when they will be hosting a socially distanced evening Spike from The Quireboys – details HERE.

Boasting state of the art L-Acoustics sound and lighting systems, the 600 capacity Concorde 2 is a classic Victorian building located on Madeira Drive, originally used as tea rooms in the 1800′, but these days one can purchase something a little stronger!

Having said that, there is no sustenance on offer tonight and the slightly dusty interior dimensions for once look cavernous! There’s hardly a soul here! Obviously there’s the two bands who are performing and the FourFace guys who are being assisted on video cameras by our photographer chums Cris Watkins and Ian Bourn. There’s us two from the Brighton & Hove News Music Team as well as two other people (one affectionately referred to as ‘The Duchess’) and us and that’s it! We just had to remember not to tread or trip on the many cables and not to get in the way of the cameras!

This seems weird but the temperature is cooler than we are accustomed to as there aren’t nearly 600 punters jumping up and down and sweating profusely. But once the artists appear on stage it really doesn’t matter as we all get in the zone! 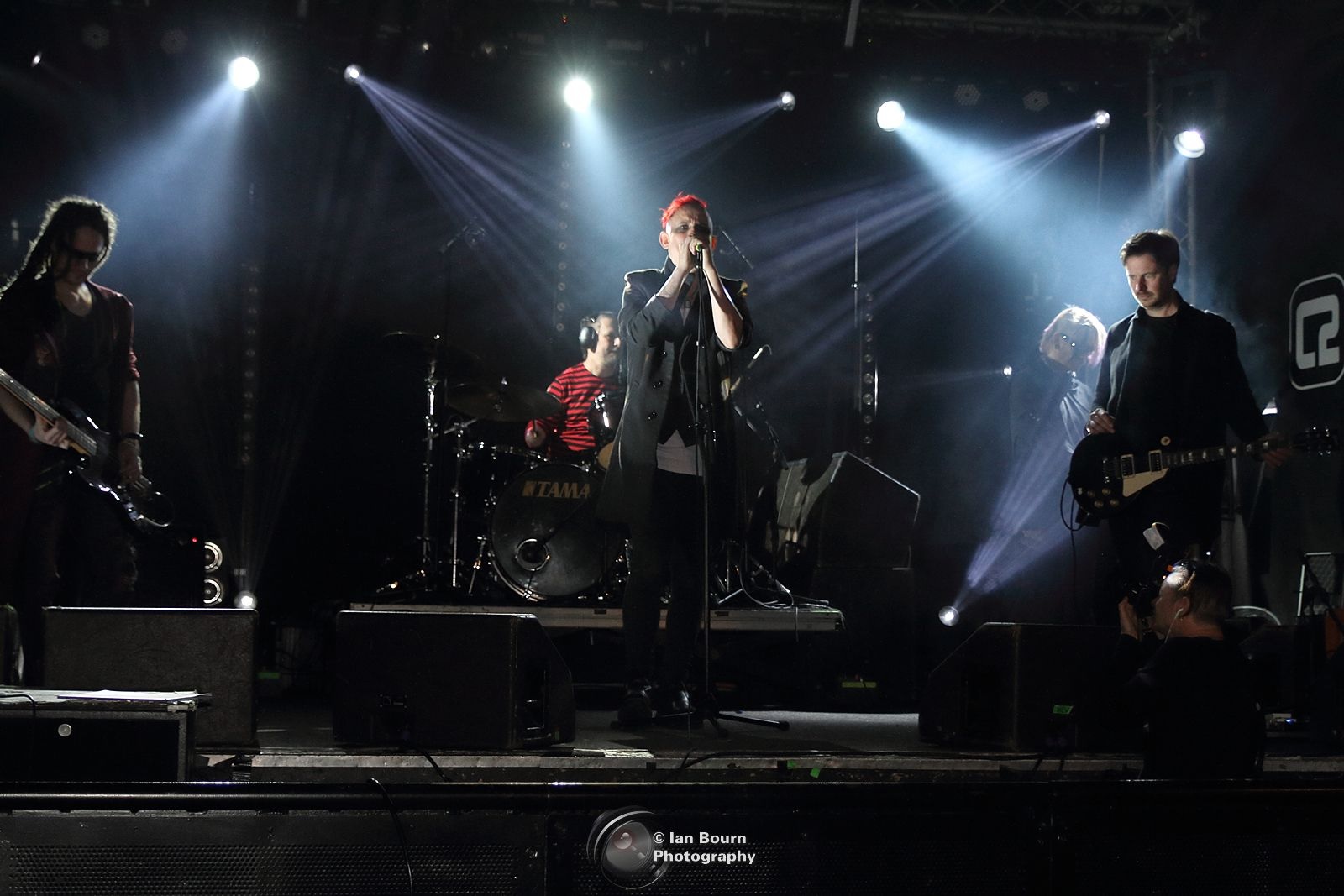 Performing for us tonight are IAMWARFACE and The Pink Diamond Revue  –

Tonight was a different assault on our ears as we were hearing the sound as the acts heard themselves via the on stage monitors. There was no PA sound pumping out at us into the audience! To be honest, we didn’t actually need it. 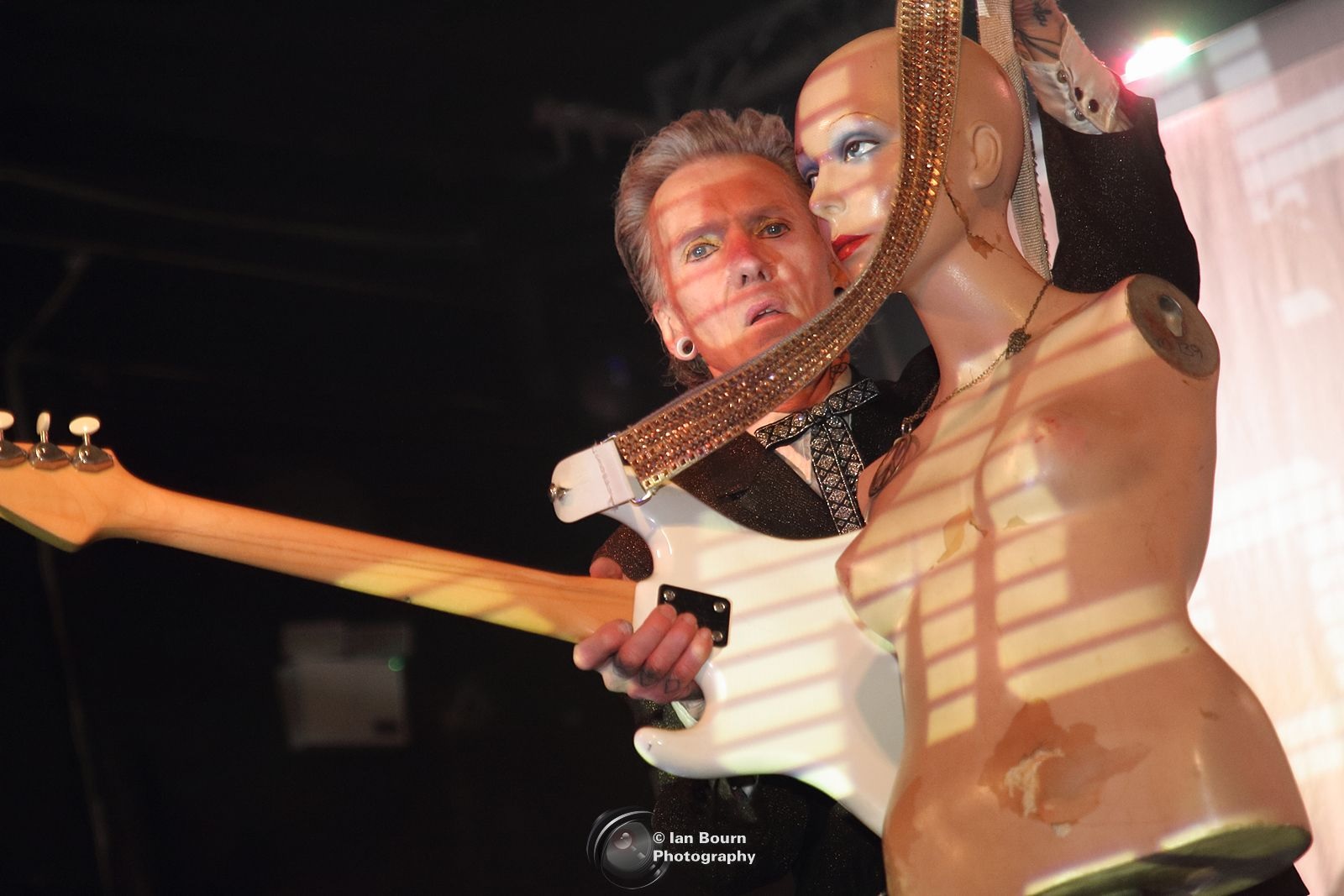 First up are The Pink Diamond Revue, who we last saw performing live in Brighton up at The Prince Albert on 15th December 2019.

It’s fair to say that these guys are unique and once seen, never forgotten. Eccentric? Positively! Captivating? Affirmative! Enjoyable? Definitely!

It’s fair to say that The Pink Diamond Revue an electro-amalgam of 1987-89 ‘Music For The Masses’ era Depeche Mode; the electro-psych vibe of TVAM; ‘Peter Gunn’ flavour Art Of Noise; the sound and poses of Sigue Sigue Sputnik and lashings and lashings of Sheep On Drugs imagery and sounds that the likes of Marc Almond would adore. The way they see themselves is: “A world where ‘60s film soundtracks meet sampladelic acid house in a baggy-punk rathole somewhere in Interzone” and “Live band fronted by AciD dol a model from another dimension”. 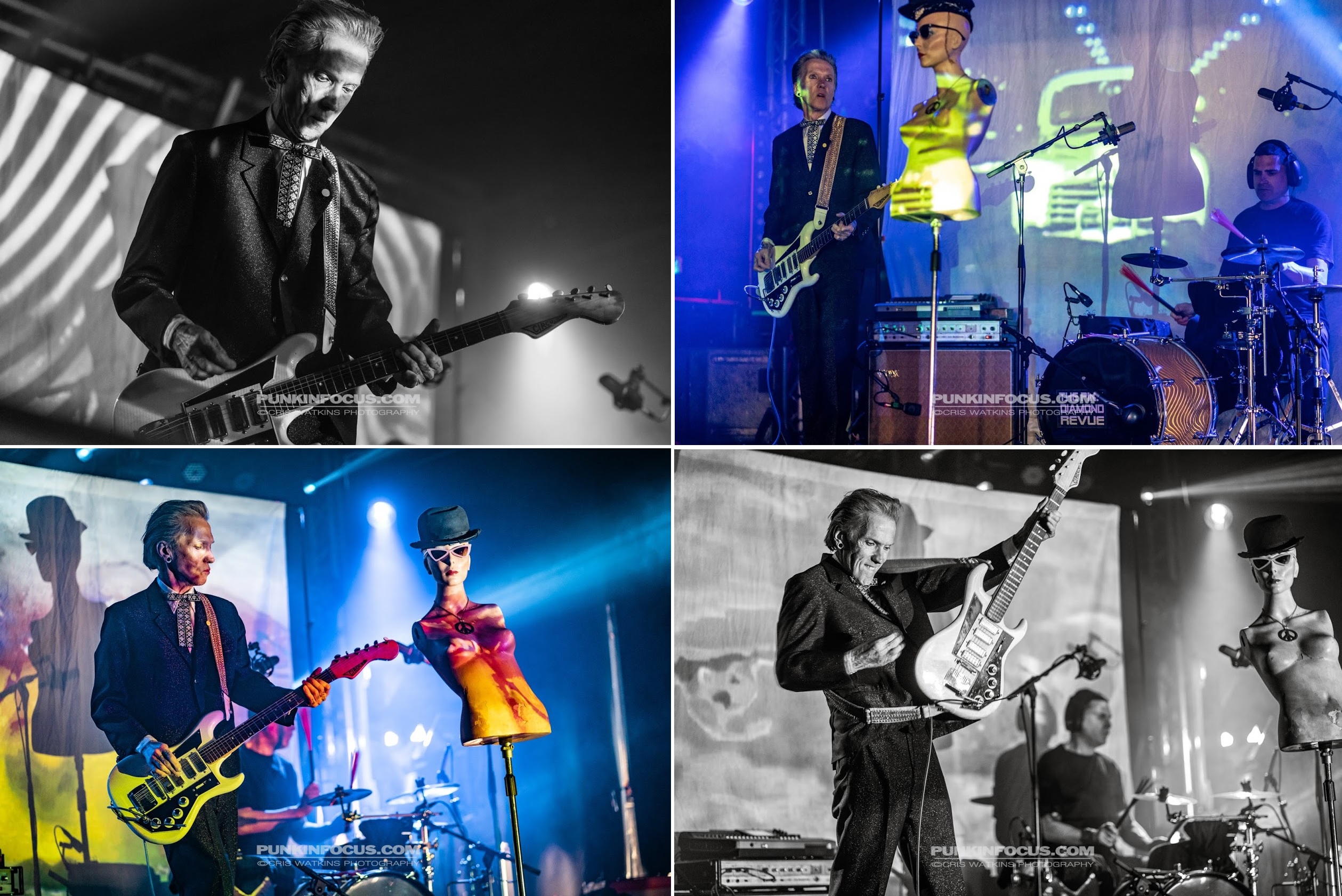 The Pink Diamond Revue line-up consists of two contrasting guys fronted by the top half of a female mannequin known as AciD dol, that they may or may not be obsessed with!

We have the London and Reading based, smartly suited, gum chewing, distant-vacant staring, guy liner wearing, chisel-edged featured ‘Thin White Duke’ era Bowie lookalike in the form of guitarist Tim Lane, and he is accompanied by Reading based t-shirted drummer Rob Courtman Stock. Clearly there is a Pet Shop Boys or Soft Cell type of clashing personalities going on here, with one being extroverted (in the style of Neil Tennant and Marc Almond) and the other introverted (Chris Lowe and Dave Ball).

Tonight, during their 37 minute set, which was backed by a stream of images projected onto the backdrop, Rob constantly drummed away with his red fanned drumsticks in the background, whilst AciD dol (who even has a song named after her) and Duane Eddy style guitarist Time Lane, took front of the stage. They were both animated, one with the assistance of the other. One had absorbed the essence of mid 70’s David Bowie meets Martin Fry (ABC) with guyliner at a tattoo parlour, and the other donned shades and hats and moved via the assistance end of the head of the guitar. 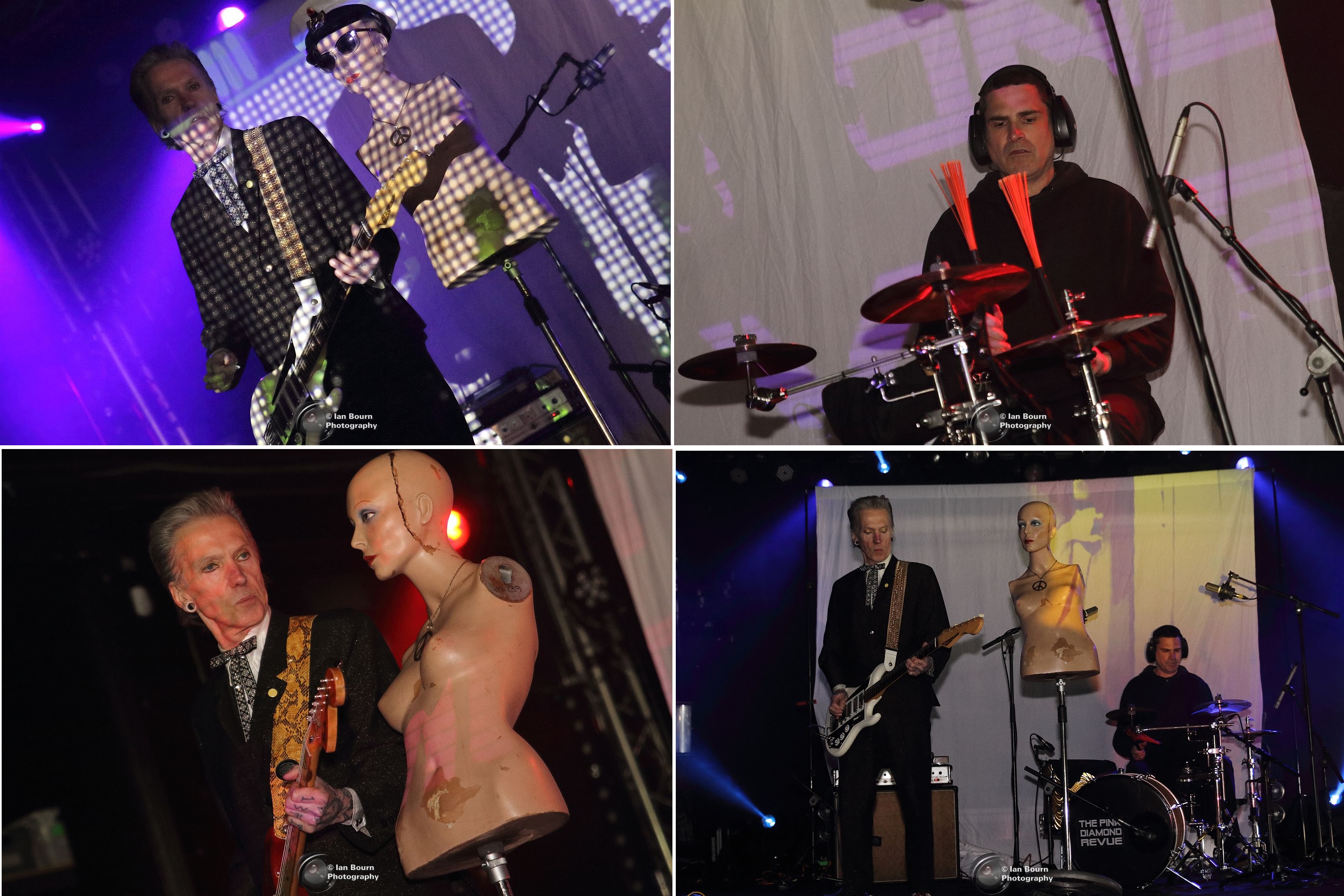 There was no need for a microphone, as there were no lyrics, just an onslaught of guitar riffs that Neil X (Sigue Sigue Sputnik) would have been proud of. The only spoken material emanated from the cut ups that ran with the electronic backing. You can see what I mean by enjoying one of my fave tracks on the set, the all too brief ‘Go Go Girl’ – watch the official video of the track HERE. Also of note were ‘Miss Lonely Hearts’ and ‘At The Discotheque’. In fact there wasn’t a dud track in their whole set. There was no interaction with those watching at home. The Pink Diamond Revue simply let their music do the talking.

There’s certainly not enough releases to date by this intriguing and unique outfit, as there is only a 12” of ‘Miss Lonely Hearts’ and a 10” of their cover of the epic Sean Connery James Bond ‘Diamonds Are Forever’ theme made famous by Shirley Bassey in 1971. However make a note in your diaries for 22nd October 2021 as they will be dropping their next single, ‘The Fuzz Guitar’.

A very enjoyable nine song set this evening. I would see them again live at the drop of a hat as they are currently one of my favourite bands! I’m sure ‘The Duchess’ present enjoyed the set too. And indeed I hear that they will be returning to Brighton later in the year!

Listen to/purchase their 4 track limited edition 12” vinyl single from their own Bandcamp page HERE and do the same for their 10” black vinyl of ‘Diamonds Are Forever’ / ‘Miss Lonely Hearts Rude Audio’s Lonely Surfer Remix’ on All Will Be Well Records HERE. 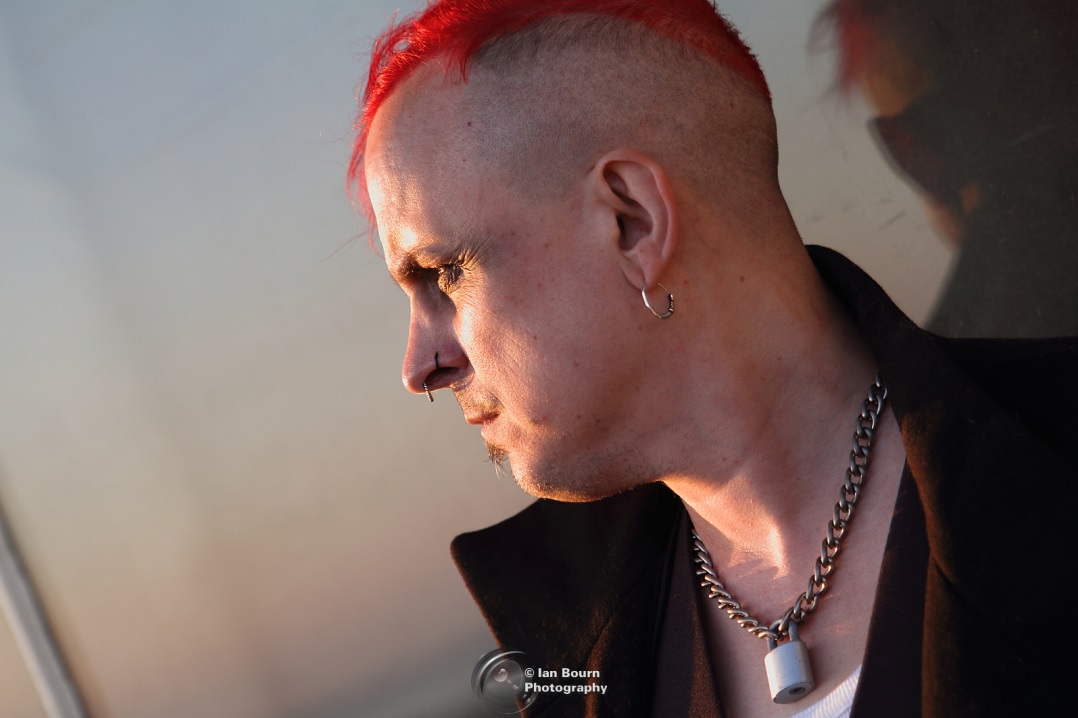 Matt from IAMWARFACE outside the Concorde 2 (pic Ian Bourn Photography) (click on pic to enlarge!)

It was now time for tonight’s other music act IAMWARFACE to take to the stage for their 58 minute set, after a somewhat lengthy sound rehearsal.

IAMWARFACE are best described as an electro rock band. They were formed in London around five years ago by singer/producer Matt Warneford. The other members are Lou Matthews (guitars), Tom Howe (DJ/synth), Mike Smith (bass) and Adam Stanley (drums). The name of the act is a metaphor for Matt’s own original style of bombastic high-energy groove based electro-rock, which has been affectionately branded “Rocktronica” by none other than legendary Virgin Radio host Eddy Temple Morris.

The band have supported Gary Numan on tour and anyone that is aware of Numan’s recent heavy industrial sound, which has brought him renewed chart success, and that of Nine Inch Nails (NIN), will have some idea as to where IAMWARFACE are coming from. They have stated that their inﬂuences include Depeche Mode, Gary Numan, Kasabian, Muse, Nero, Queens of the Stone Age, Tears For Fears, Yeah Yeah Yeahs, Black Keys and MGMT. I would flag up that if your music choice includes darkwave and industrial like Psyche, Project Pitchfork, Diary Of Dreams, Front Line Assembly, Clan Of Xymox and also the heavier side of Depeche Mode, then IAMWARFACE are most definitely for you! 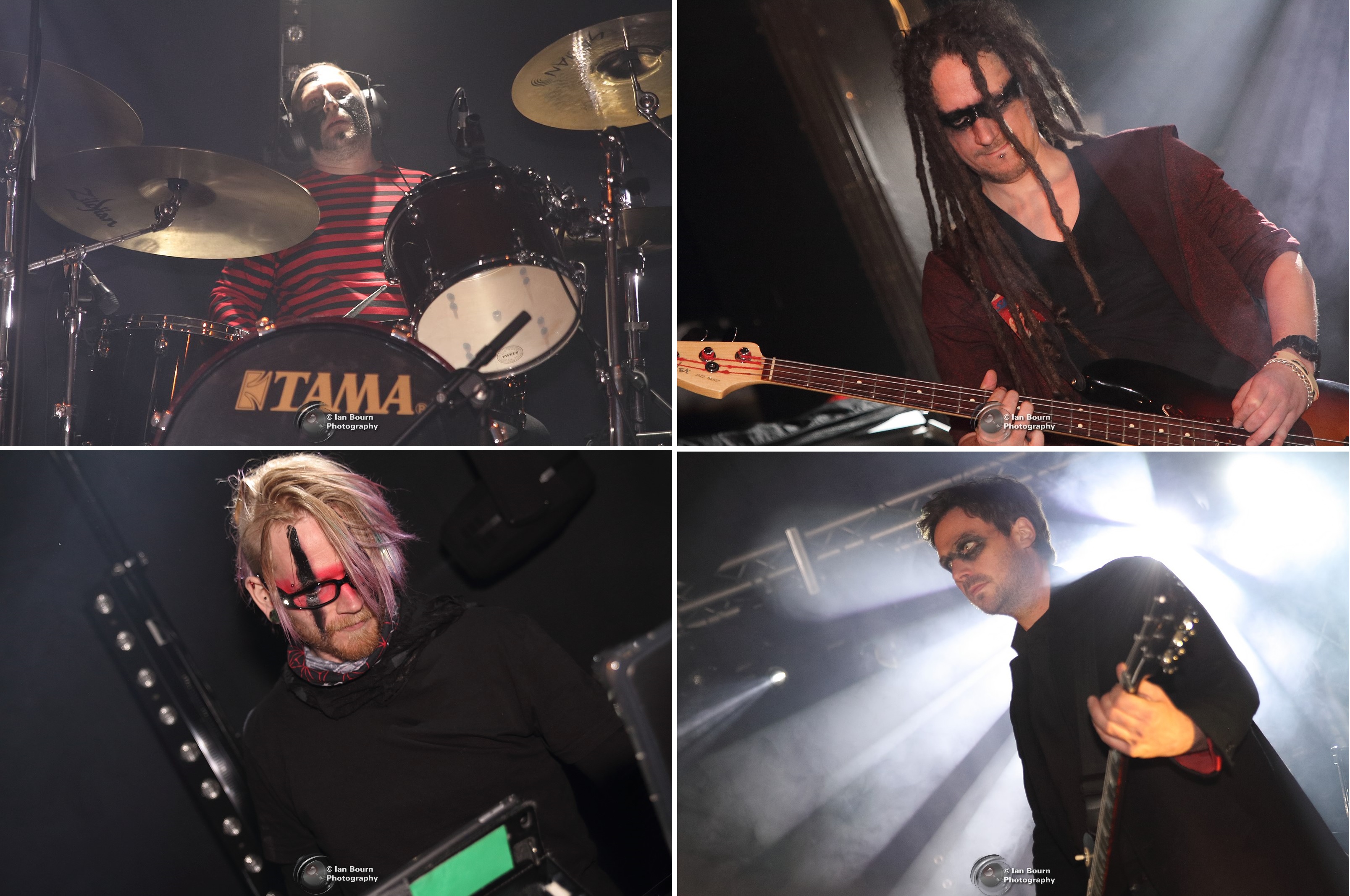 The debut IAMWARFACE album titled ‘Year Of The Dragon’, was released on 6th September 2019 and is a consistent work of art. Grab your 12” blood red vinyl album HERE.

Tonight, during their dozen song set, the quintet looked rather striking, especially frontman Matt’s bright red hair and the band members’ use of black make-up. Plus the keyboard player’s Orbital style light glasses. We were also treated to a cameo appearance by ‘Demon Dean’, who came on stage wearing seriously striking face paint. Clearly they were treating this as though it was a ‘real live crowd face-to-face gig’.

The lighting certainly complimented their heavy full on rounded industrial sounds, especially from the electronic keyboards, when they had their solo parts. One of my faves is ‘Say My Name’ (which is their album opener), but tonight the vocals appeared a tad little down in the mix as opposed to the vinyl edition. Having said that, I still enjoyed it.

Their tune ‘Closer’ was rather good, but when ‘Trigons’ (their album’s closing track) appeared immediately afterwards, it simply blew every previous song out of the water, with the exception of The Prodigy-esque ‘Take The Shot’. No wonder they finished the album with ‘Trigons’, leaving the fans on a high. I believe it’s usually their closing live track too, but not this evening. 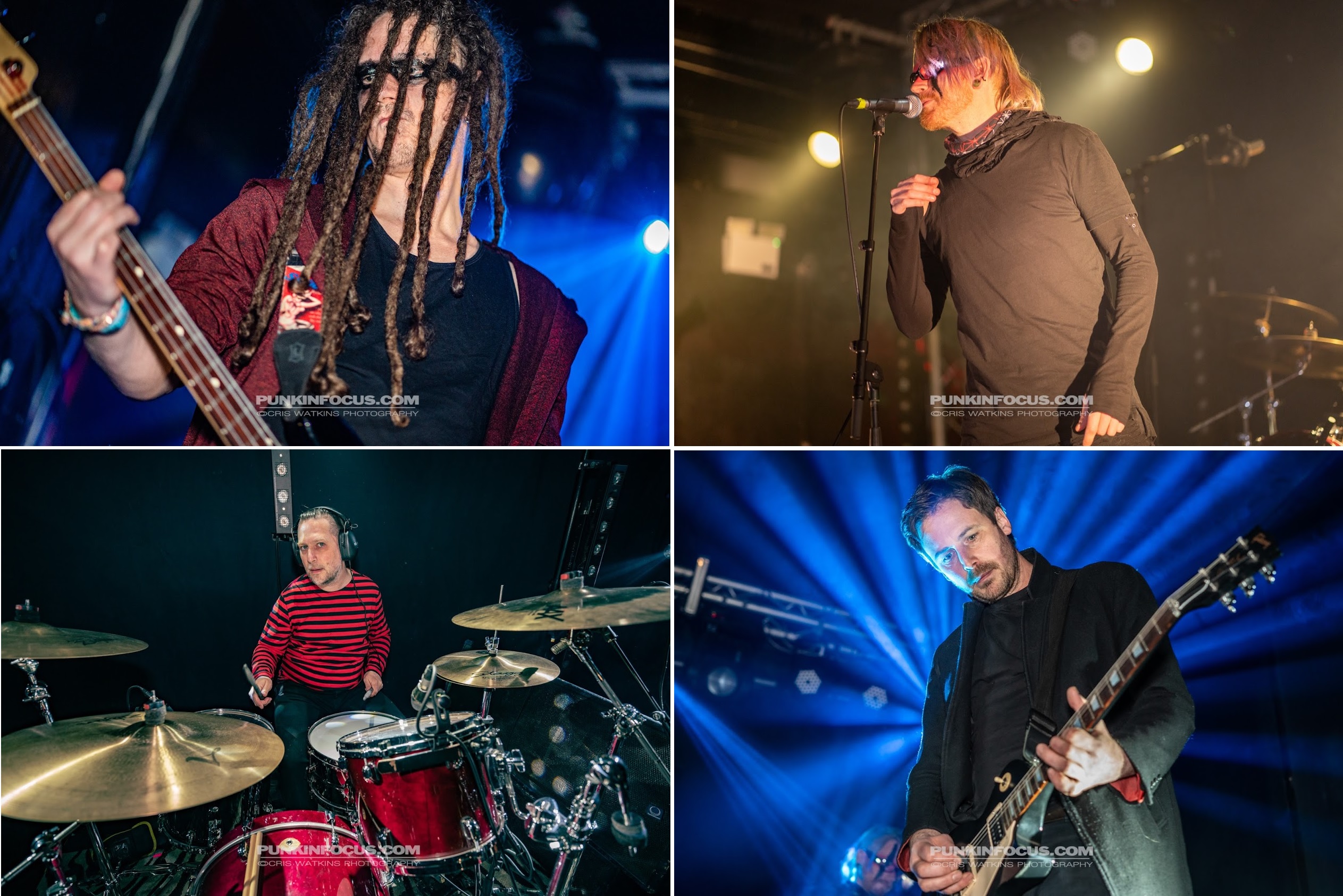 This evening they played ‘Vampire’ which will be appearing on the next album. It was a more guitar frenzy affair. A signal of a slightly new direction? Time will tell. The guys bowed out with ‘Red Queen’ and that was it! Job done!

Here is a band that surely deserves to be bigger than they currently are. Is it a matter of time? Frontman Matt has the stage presence and they have an air of an act that surely must headline the dark music ‘Wave-Gotik-Treffen’ festival at some stage. This annual event takes place in Leipzig in Germany with 150+ acts on the bill.

The IAMWARFACE setlist reads:
‘Wake Me Up’
‘Black Room’
‘To Die For’
‘Say My Name’
‘You Don’t Love Me Anymore’
‘Bleed Out’
‘Take The Shot’
‘Closer’
‘Trigons’
‘Fear The Future’
‘Vampire’
‘Red Queen’

Further info on IAMWARFACE can be located below:
Website / Bandcamp / Spotify

So in conclusion, a great and welcomed night out for us! Thanks to the FourFace and Concorde 2 teams who have been working hard behind the scenes to continue to keep the Brighton music scene alive! 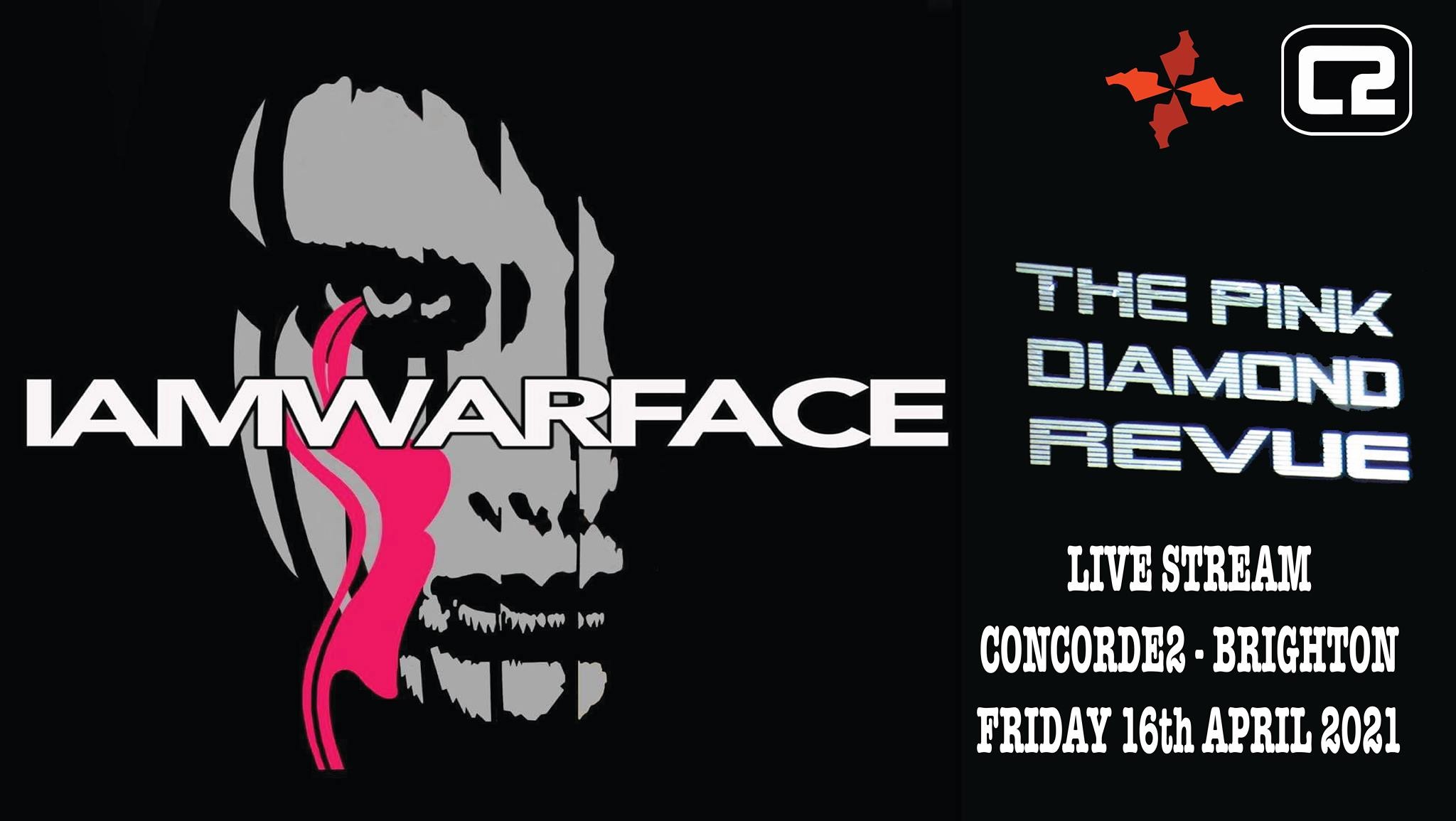 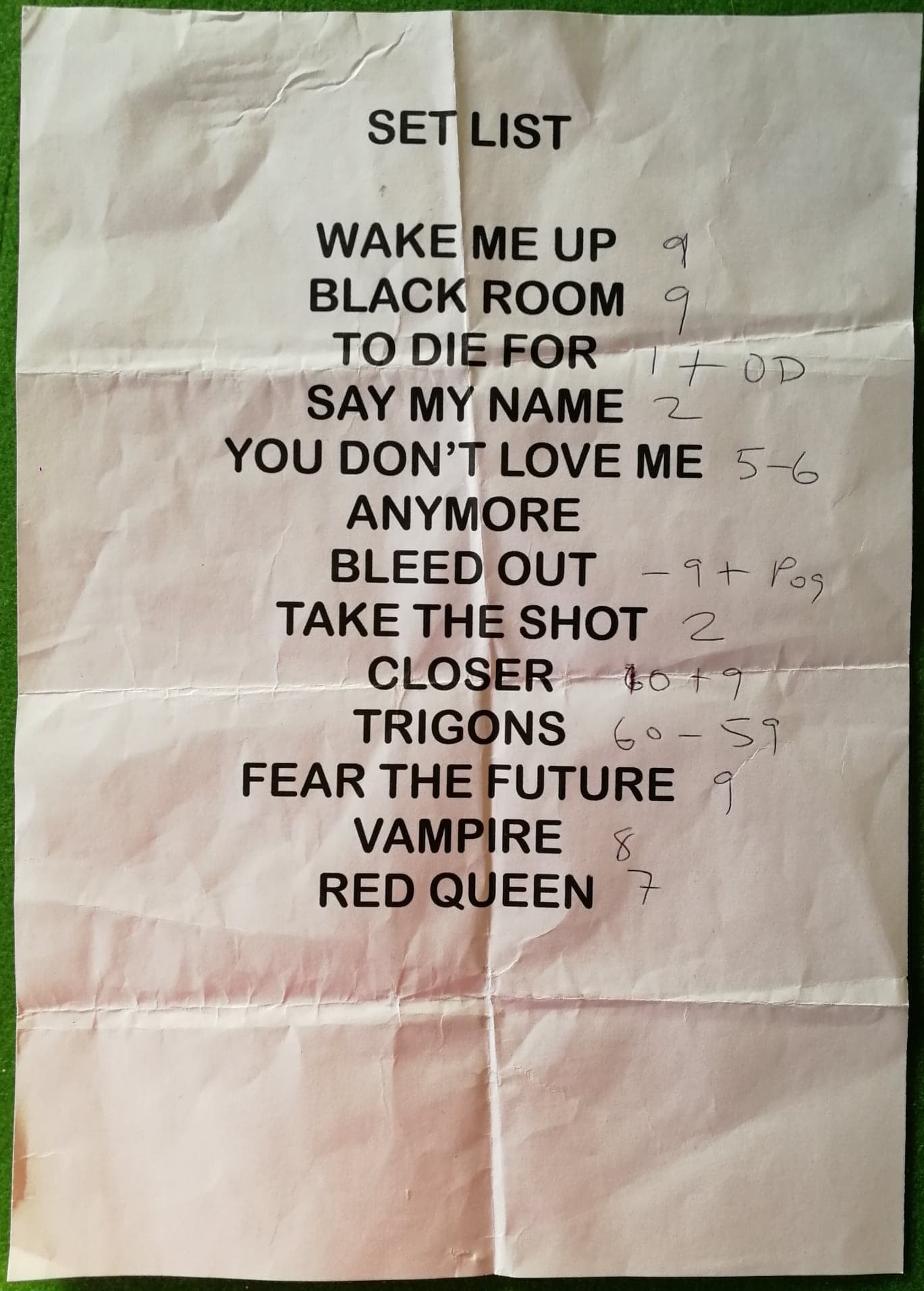