A Brighton pub has lost its alcohol licence after a violent incident involving a 16-year-old and a “rogue” member of door staff highlighted a “breakdown in management”.

The licence at Molly Malone’s in West Street, Brighton, will remain suspended even if owners Indigo Leisure appeal against the decision made by a panel of three councillors.

Sussex Police asked Brighton and Hove City Council to review the licence for Molly Malone’s after a violent incident at the pub on Tuesday 6 July.

The council licensing panel held a review in secret after Sussex Police barrister Peter Savill said that elements of the criminal proceedings were still active.

The Hove teenager who was charged after the incident last month – and whose identity is protected by law – admitted carrying out a violent attack at Brighton Magistrates’ Court.

The licensing panel’s decision said that management failures and “rogue” door staff were partly to blame for the teenager being in the premises.

The panel said that Sussex Police had listed a number of incidents at Molly Malone’s since July last year which in themselves would not have led to a request for a review.

But the seriousness of events on Tuesday 6 July “illustrate failures and longer-term issues at the premises”.

The incidents listed included intoxication and violence, including an allegation of a sexual assault and an inability to control customers’ behaviour.

Indigo Leisure’s barrister Sarah Clover told the panel that the incident on Tuesday 6 July had sent “shockwaves” through the premises but did show management failure.

She said that the company was a responsible licence holder, with 17 licenced businesses in Brighton and Hove – and “solid training and management procedures”.

Molly Malone’s had not failed any test purchases since its licence was reviewed in 2014 after an underage sale.

On the night of the violence, a junior supervisor was in charge of the business rather than a “fully fledged” manager which would have been the usual practice. 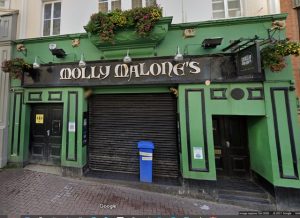 The panel said: “There were clearly serious management and staff failures on Tuesday 6 July which permitted the 16-year-old to gain access and remain in the premises.

“It is suggested that just two staff were responsible for this failure but the licence has a whole raft of conditions requiring regular surveillance and checks in the premises by all staff and yet these were not sufficient to prevent the serious incidents.

“There were clearly considerable failures on the part of the door staff at the premises on the Tuesday 6 July and one of them working there, referred to as the ‘rogue door man’, was already banned from working at the premises due to previous issues and this should have been prevented.”

The panel said that even though Indigo Leisure has good credentials regarding its wider practices and training, management at Molly Malone’s was “not strong enough” for a business in busy West Street.

Adding extra conditions to the licence, including introducing ID scanners and reducing hours, were discussed with Indigo Leisure.

But the panel decided these measures would not be effective in addressing their concerns.

Indigo Leisure has 21 days to appeal against the decision. In the meantime, the licence would remain suspended.