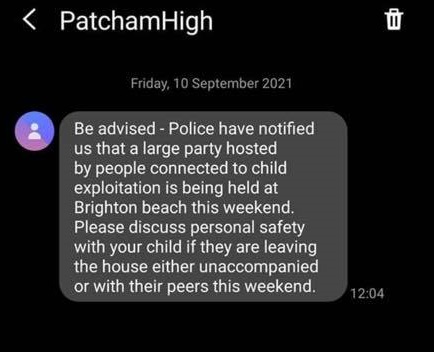 A message sent out to parents of a Brighton school saying police are warning of a child exploitation party on Brighton beach is a scam.

Sussex Police said it had not issued the warning, sent by Patcham High this lunchtime. Brighton and Hove News understands similar warnings have been sent by other local schools.

The warning said: “Be advised – police have notified us that a large party hosted by people connected to child exploitation is being held at Brighton beach this weekend.

“Please discuss personal safety with your child if they are leaving the house either unaccompanied or with their peers this weekend.”

Brighton and Hove City Council also confirmed the warning had not come from it.

The message was posted on various Facebook groups, leading some parents to say they would be keeping their children in this weekend.

A spokesman for Sussex Police said: “We have no information about any planned event of this type this weekend and have not issued any such warning, via a school or separately.

“We always advise parents to continue to take common sense precautions to keep their children safe, and to be aware of their whereabouts, and of course to contact the police if they have specific concerns.

“This weekend is no different in that regard.”

Patcham High later sent out a message saying the information had not come from police. The school has been approached for comment.