‘Return Of The Dread’ as Dreadzone fill the Concorde 2 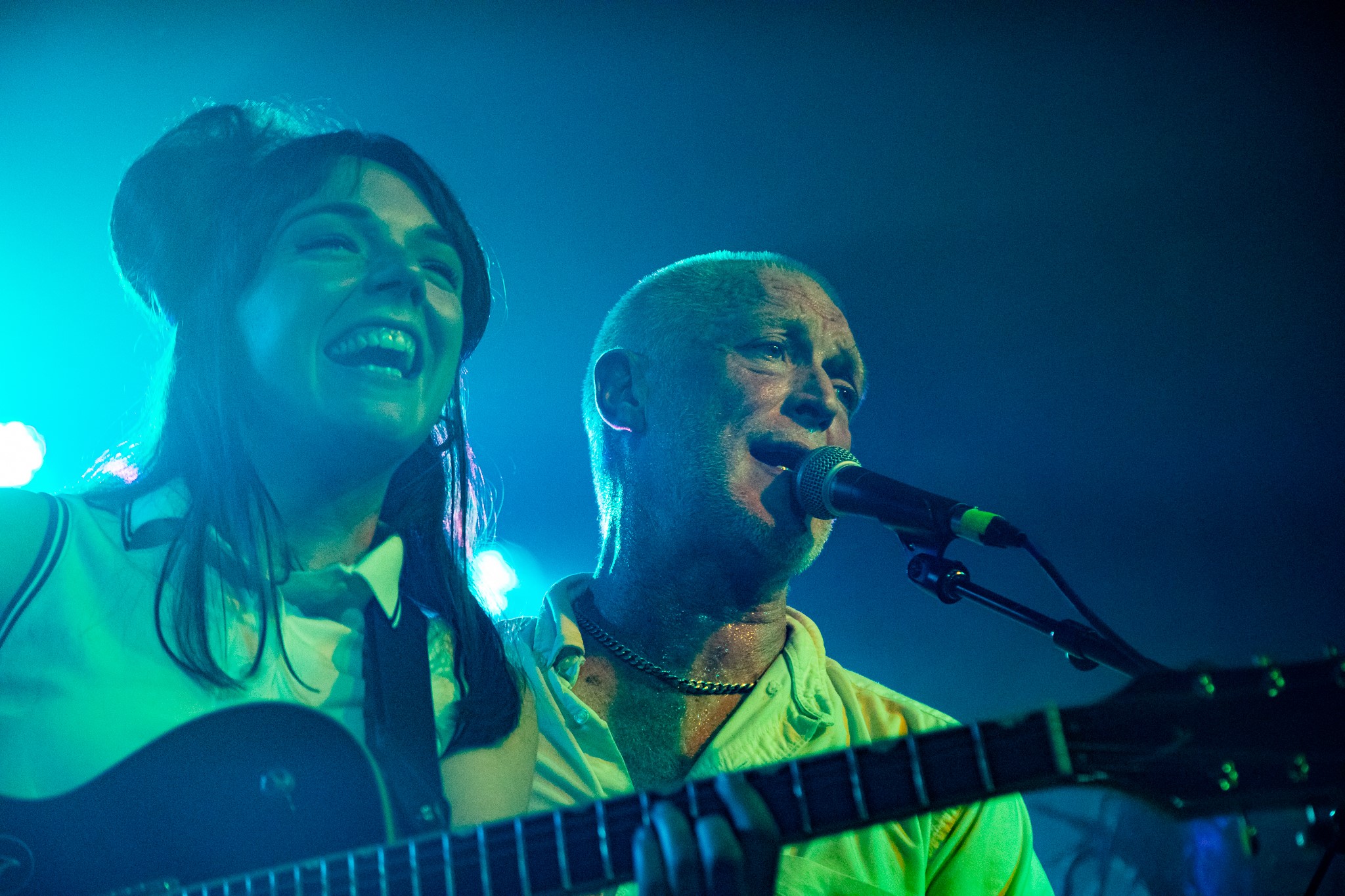 It’s fair to say that Dreadzone are always 100% dependable in giving punters an absolutely fabulous night out whenever they perform live and this evening at the Concorde 2 on Brighton seafront, the faithful were certainly rockin’ to the uplifting sounds of Britain’s premier electronic reggae act.

Once again, the band sold out the venue and a poll conducted by ‘one in a million frontman’ MC Spee via a show of hands by the audience, gave rise to the fact that there were a number of Dreadzone virgins in the audience tonight, one of which being my girlfriend. 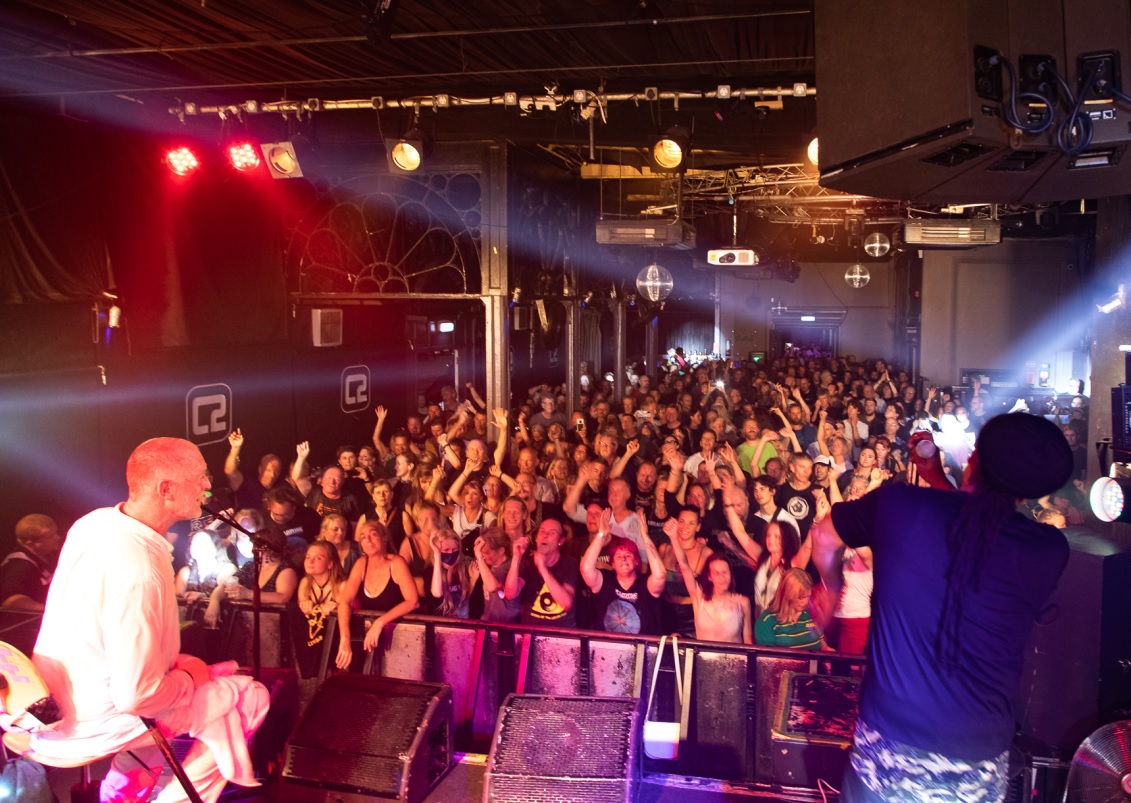 The Concorde 2 crowd this evening 17.9.21 (pic Simon Partington) (click on pic to enlarge!)

I have witnessed their set several times now and on every occasion the band have had the audience enthralled. If you wish to have a night out where you can jump around and be yourself to some modern British reggae sounds, then you really do not need to look any further than these guys. It’s no wonder that they have performed their pleasant mix of dub, reggae, ska, electronic rock and trip hop on the Pyramid Stage at Glastonbury! They are a festival organisers perfect dream, as they put out positive vibes! A Dreadzone gig is a massive hit on your endorphins!

They have been continually on the case since their formation in 1993 and are still one of the best live bands around, where they have honestly been spreading joy over the past 28 years! They are one of the most energetic, exciting and powerful live bands to emerge from the post-rave scene. They have steadily been releasing albums and progressively bettering, refining and perfecting their own unique and inimitable take on dub since their inception. 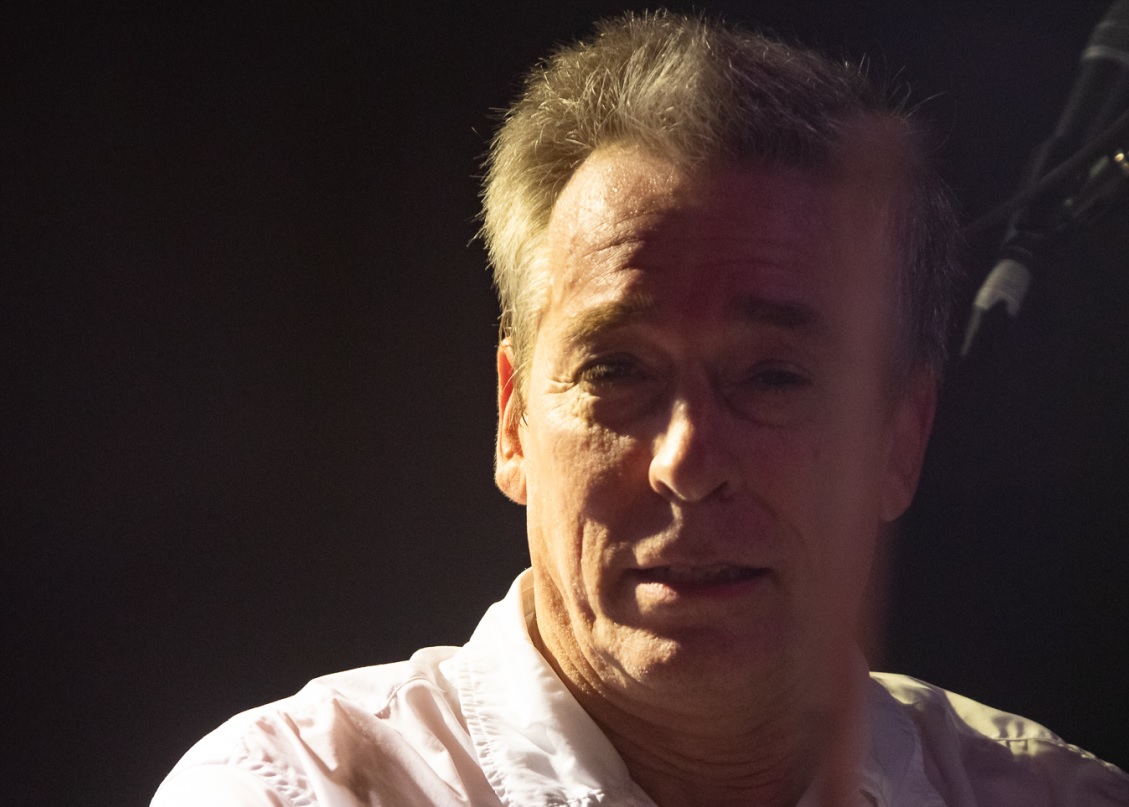 Greg Dread from Dreadzone live at the Concorde 2 17.9.21 (pic Simon Partington) (click on pic to enlarge!)

The band members sure do have a decent pedigree as Greg Dread is none other than Greg Roberts who was a founding member of Big Audio Dynamite (B.A.D), along with former Clash member Mick Jones, the Rebel Dread film director Don Letts, Dan Donovan and Dreadzone’s bassist Leo ‘E-Zee Kill’ Williams. 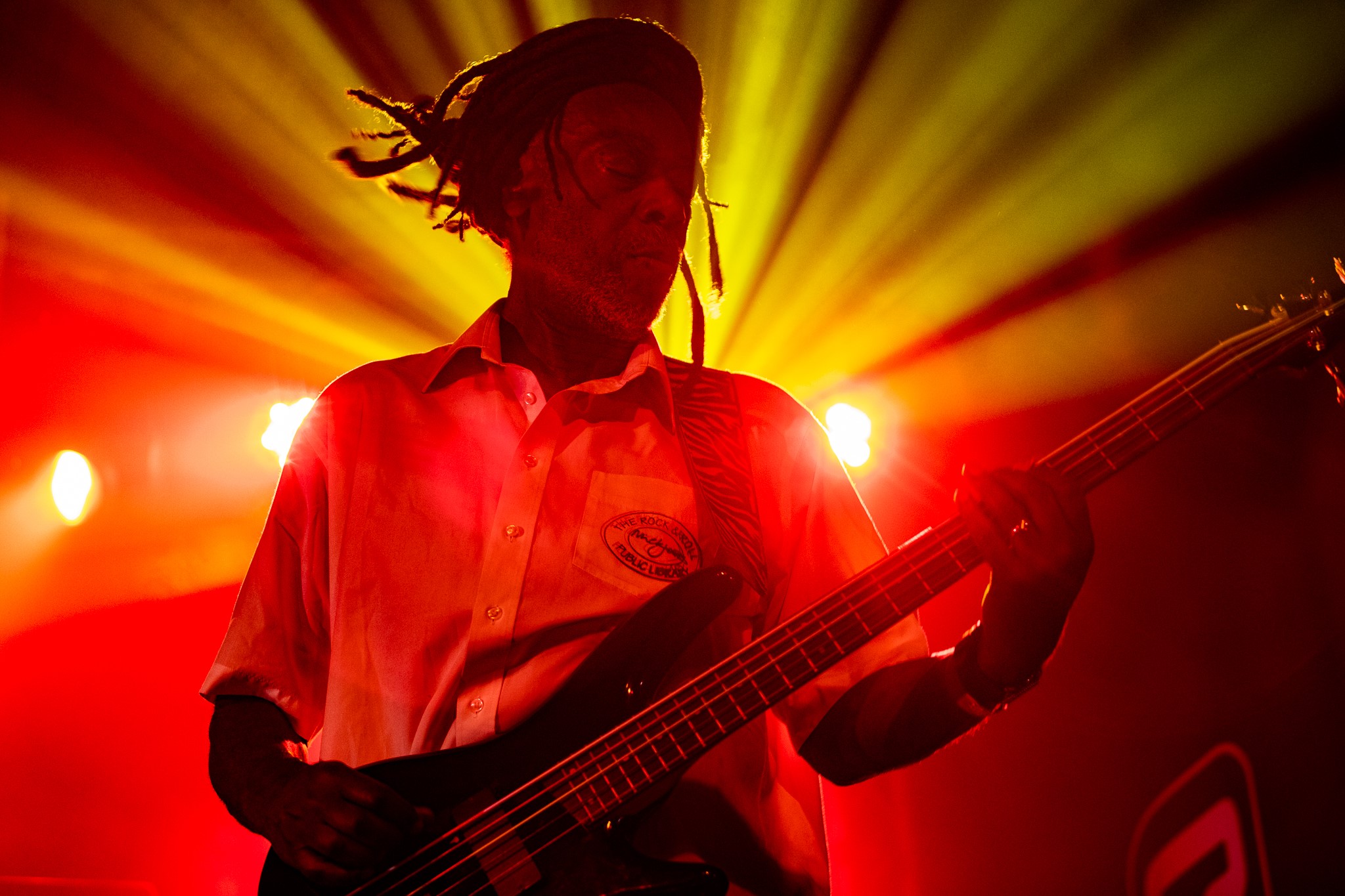 Leo Williams from Dreadzone  live at the Concorde 2 17.9.21 (pic Simon Partington) (click on pic to enlarge!)

Jamaican bass guitarist Leo Williams was in an outfit called Basement 5, prior to being in Dreadzone. I can fondly remember hearing their debut single from 1980 called ‘Silicon Chip’ being played several times on the John Peel show. At some stage Don Letts was also in the band and they performed with John Lydon’s Public Image Limited and Ian Dury & The Blockheads. Basement 5’s drummer was a guy called Richard Dudanski and he had previously been in The 101ers, who’s vocalist was none other than The Clash’s Joe Strummer. 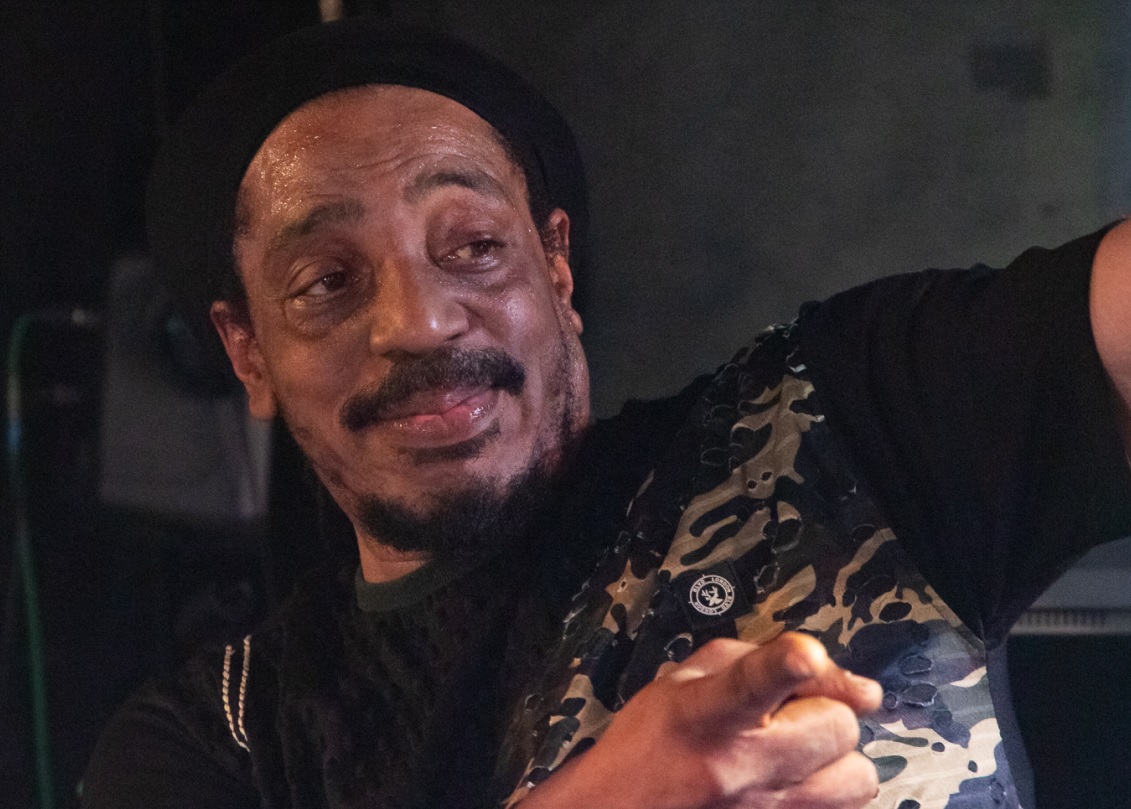 Dreadzone’s vocalist Earl 16 is Earl John Daley and he has been with the band since 1995 and has worked and recorded with the royalty of the reggae world including likes of Mikey Dread (as did The Clash), Lee ‘Scratch’ Perry (RIP), Boris Gardiner and Sugar Minott. 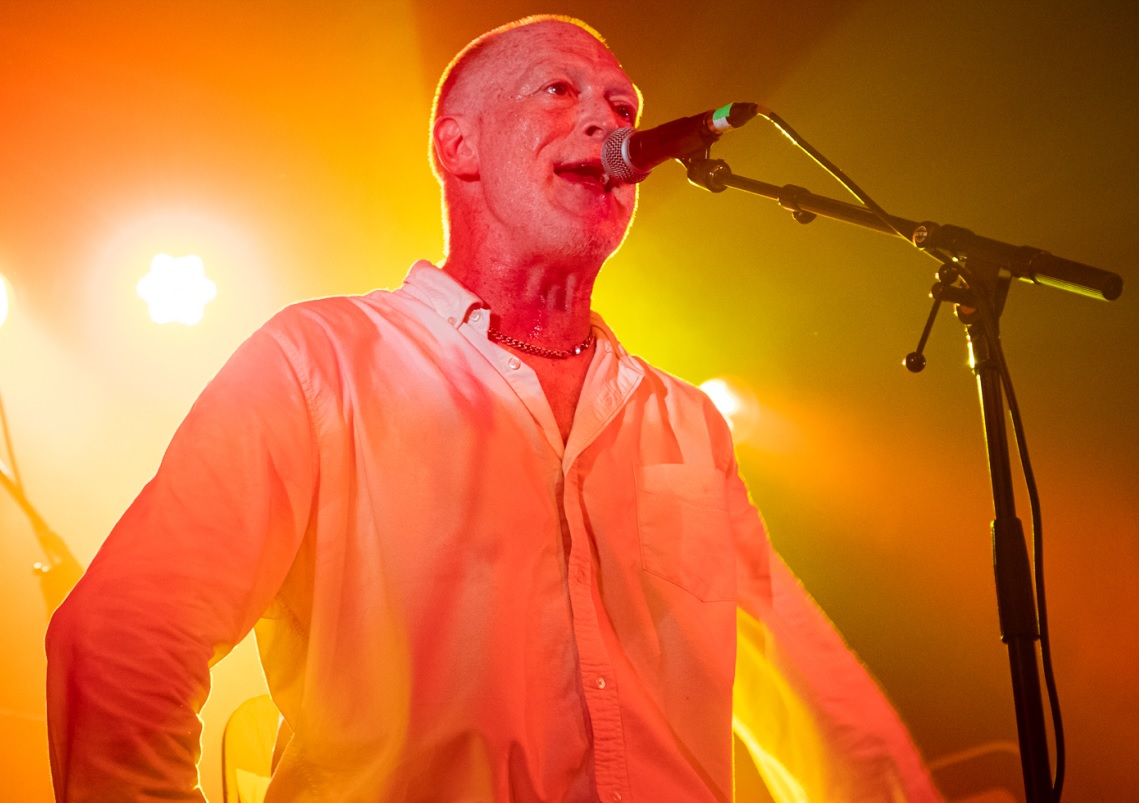 MC Spee from Dreadzone live at the Concorde 2 17.9.21 (pic Simon Partington) (click on pic to enlarge!)

Vocalist MC Spee, who was known in another life prior to Dreadzone as Spencer Graham, joined Dreadzone in 2000, and I for one can’t imagine the band having ever existed without him for their first seven years. He has incredible energy and stage presence and for me personally is one of the very best ever showmen that I have had the fortune to have witnessed live. And boy I’ve seen a great many of them Bowie, Gahan, Bono, Mercury, Marley and so on. 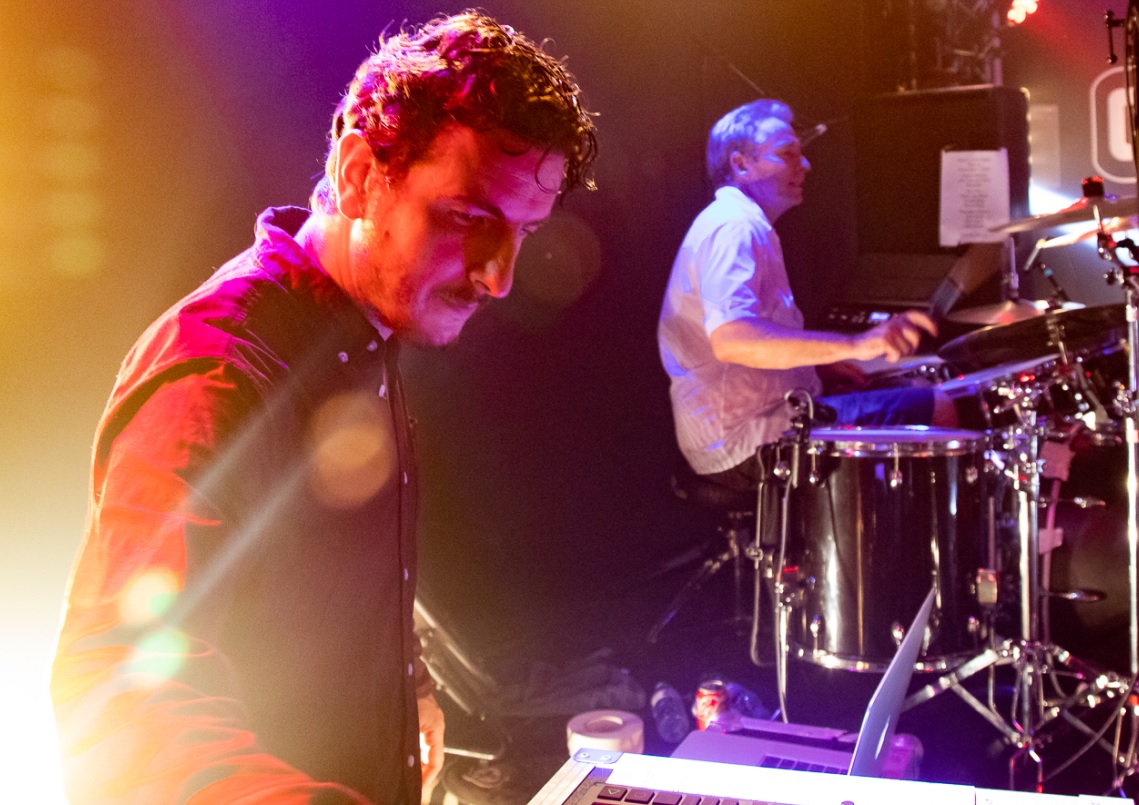 Bazil and Greg from Dreadzone live at the Concorde 2 17.9.21 (pic Simon Partington) (click on pic to enlarge!)

Cementing the line-up is James ‘Bazil’ Bainbridge who has been bringing his wizardry to the outfit since 2012, with his two laptops etc.

The Concorde 2 punters were this evening treated to a 90 minute set which commenced dead on 8:30pm and concluded at dead on 10pm, talk about professionals! 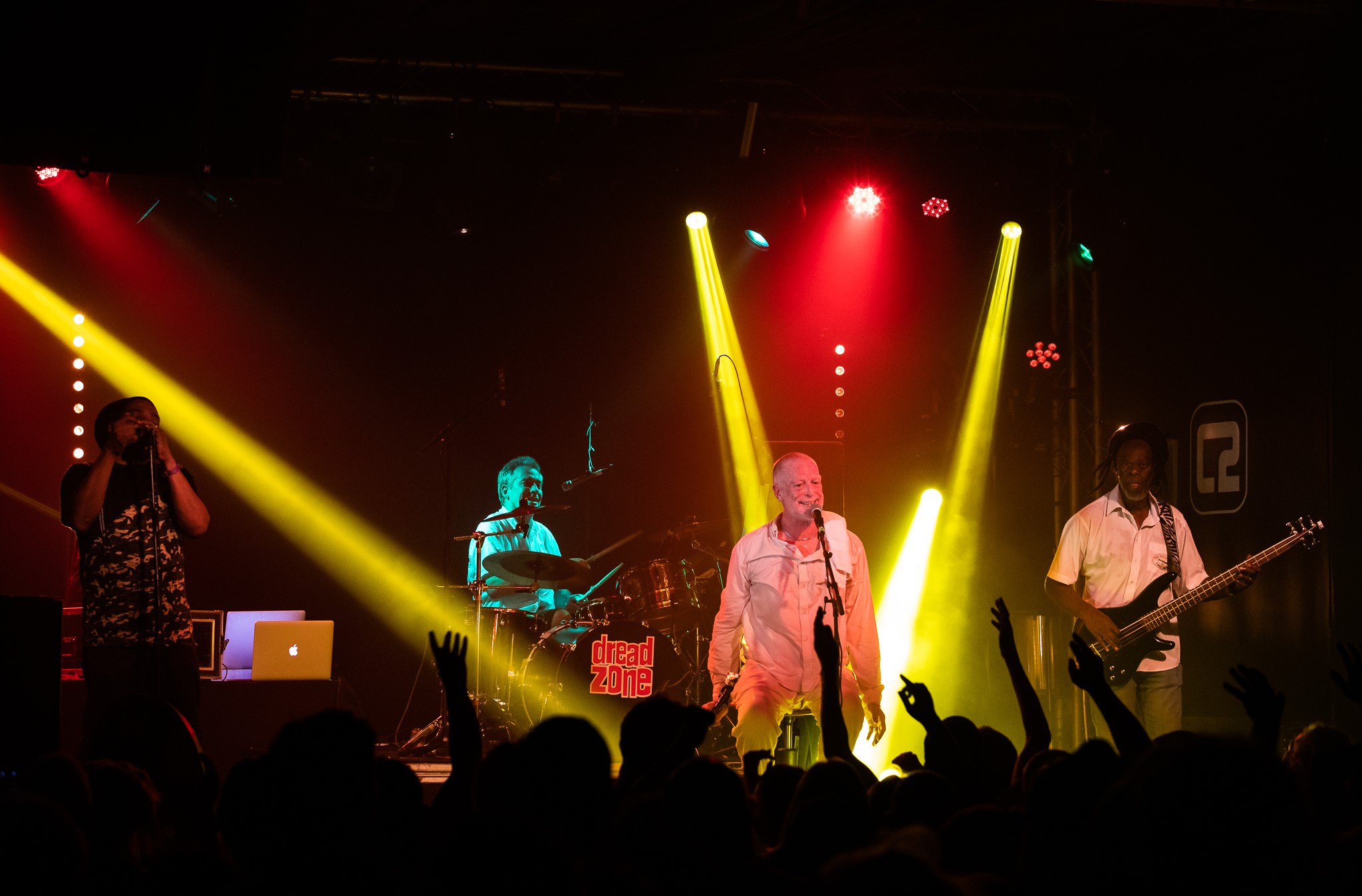 In that time they performed 15 tracks which ranged from 1995 compositions to 2017 ones! With such a catalogue of albums, it must be a difficult job, which ones to select. My own personal favourite Dreadzone albums were released in 1995 ‘Second Light’ and 2017 ‘Dread Times’. This evening the quintet obliged me with a trio of tracks from both albums, all of which were superb.

They opened with the apt post lockdown tune ‘Return Of The Dread’ (from their 2001 ‘Sound’ album), which led nicely into ‘Rise Up’ (from the 2013 ‘Escapades’ album) and ‘Once Upon A Time (In Jamaica)’ (from the 2005 album of the same name). By now, the packed crowd were nicely warmed up, but then things got a tad hotter when they performed their Ibiza anthem from 2017’s ‘Dread Times’ album, namely ‘Keep It Blazing’. This was a belter and sounded not too dissimilar to Everything But The Girl’s ‘Missing’ and Energy 52’s ‘Café Del Mar’. By the end of this number I was soaked with sweat, and there were eleven tracks to go! 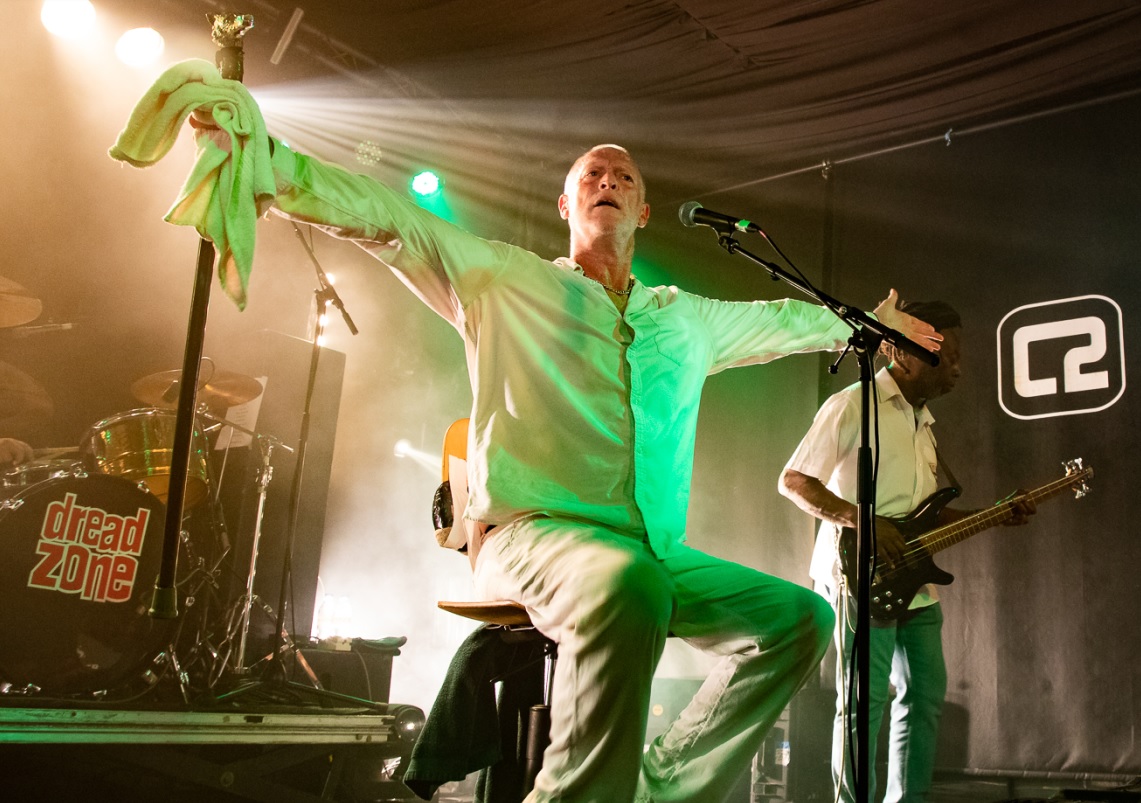 Keeping the Ibiza vibe going was the following number ‘Life Love And Unity’ (from 1995’s ‘Second Light’ album. From here we headed back off into dread country with ‘Mountain’ from 2017 ‘Dread Times’ album, but we bounced right back into raveland with ‘Iron Shirt’ (found on 2005 ‘Once Upon A Time’ album) which contains a sample made famous by The Prodigy (RIP Keith Flint) in their 1992 hit ‘Out Of Space’. The original song that these samples comes from is actually Max Romeo’s ‘Chase The Devil’.

I noticed that this evening’s stage lighting was in keeping with the nature of the gig, with reds, greens and possibly a gold here and there. Talking of colours, I noted that Leo’s bass strings were shining out in different colours including pink, red and yellow – a nice touch! The sound was clear and thankfully not as loud as the IDLES gig the other day, where my ears were ringing for a full day afterwards! 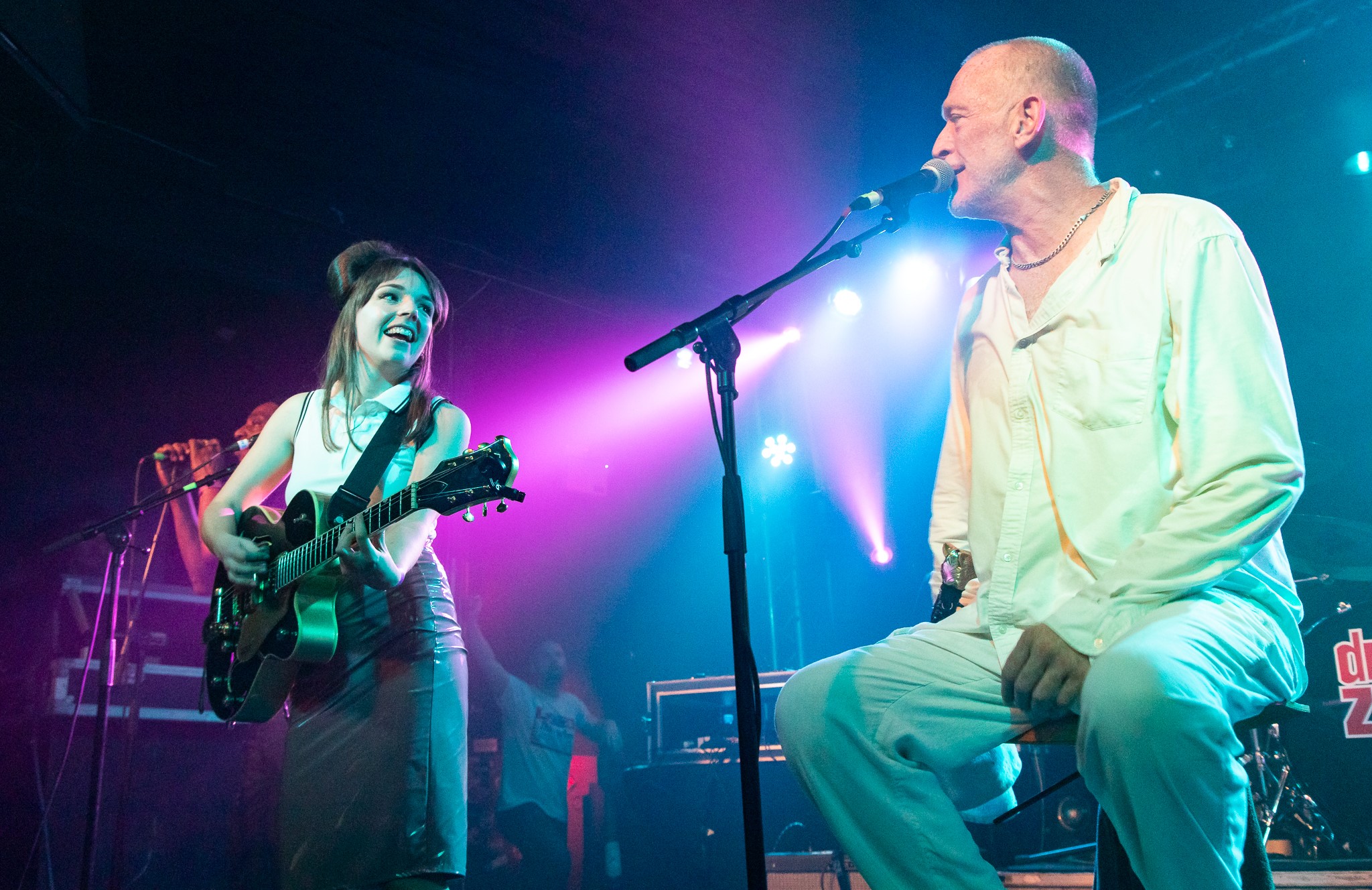 Anyway, back to the music and ‘Mean Old World’ from the 2001 ‘Sound’ album was up next and it certainly had that timewarp feel to it, and had a slight nod to ‘Go’ by Moby. Then suddenly right in front of me (yes we were standing at the very front again!) I spied the lovely Emily Capell wandering on stage! I have seen her live before at The Hope & Ruin in Brighton and she brings that old ska vibe to the party this evening as she plays her guitar along with the five lads to a brand new tune titled ‘Dread Town’. This sounds just like a 2Tone hit from 1980/1 and you know what, it could even be a future 2021/2 hit. They have secretly been writing together, so let’s hope there’s more of this up their sleeves! Catch Emily playing live in Brighton at the Green Door Store on Thursday 25th November. Purchase your tickets HERE or from your usual ticket agent.

Emily leaves up and next up, ‘Music Army’ from the 2017 ‘Dread Times’ album with its heavy basslines and military drumming, which is always a pleasure to listen to. ‘Dread’Pon Sound’ from the 2001 ‘Sound’ album followed with its ear shattering dirty dirty bass – luv it! 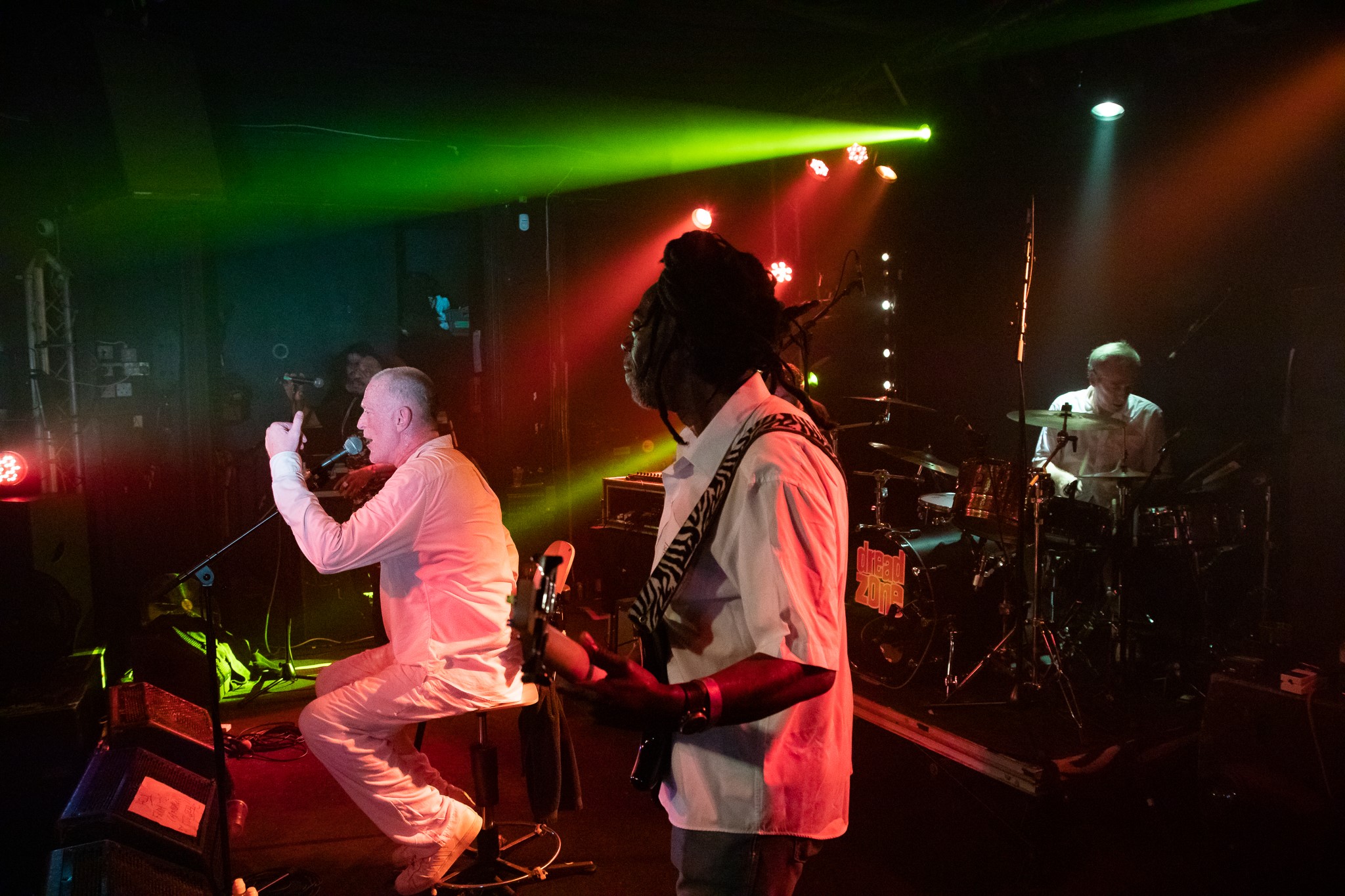 ‘Dancehall Priority’ from 2005 ‘Once Upon A Time’ album got an airing next, which was swiftly followed by the terrific ‘Zion Youth’ from 1995 ‘Second Light’ album, which sees vocalist Earl 16 master the stage.

No Dreadzone performance would be complete without the timeless hit ‘Little Britain’ from 1995 ‘Second Light’ album and the encore number ‘Captain Dread’ from the same album – Ahoy! Bloody marvellous!

My t-shirt is absolutely stuck to me and my legs are just like jelly with me having been bopping around all during the uplifting set. A Dreadzone concert isn’t just a normal concert, it’s an aural feast of the highest level. So ‘Rise Up’ and join the ‘Music Army’. 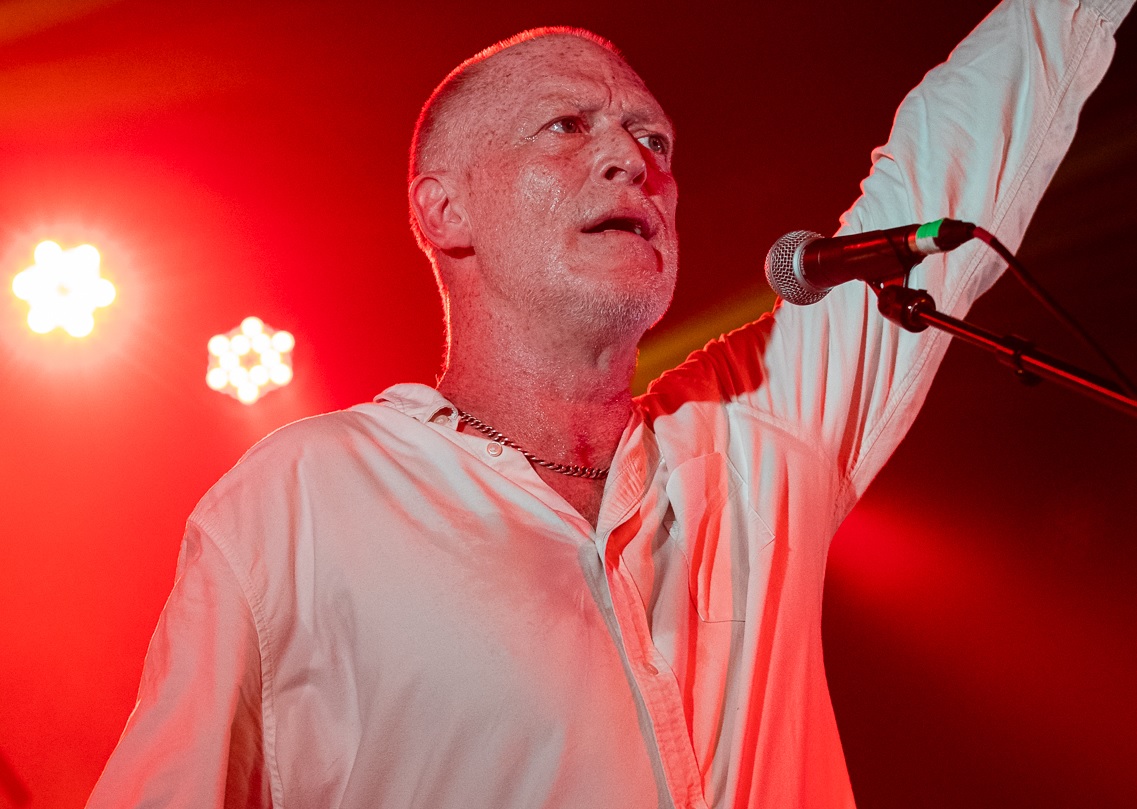 MC Spee from Dreadzone live at the Concorde 2 17.9.21 (pic Simon Partington) (click on pic to enlarge!)

For more information on Dreadzone, do yourself a favour and visit www.dreadzone.com. 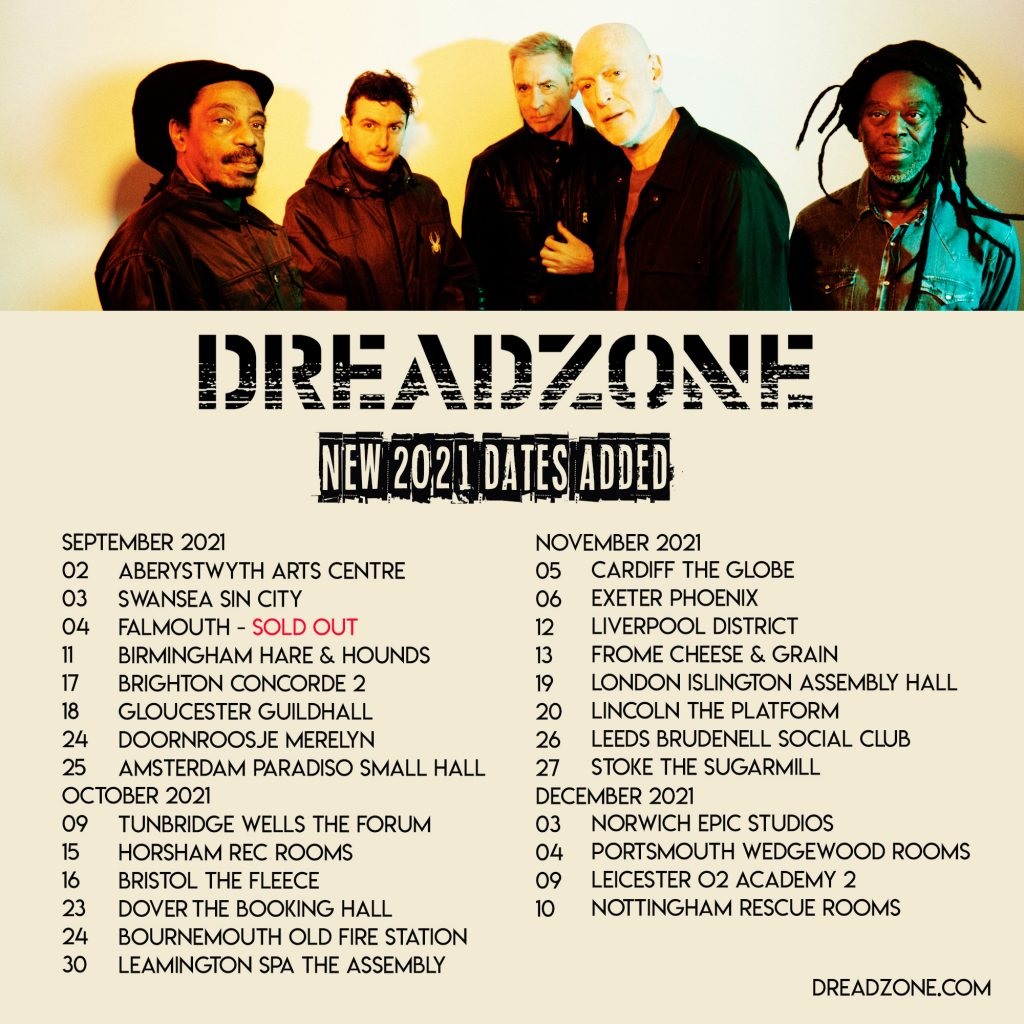 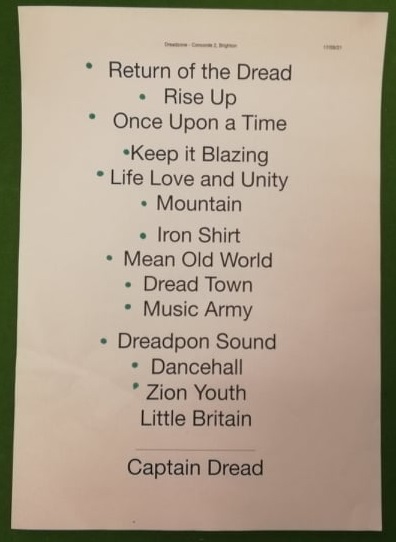