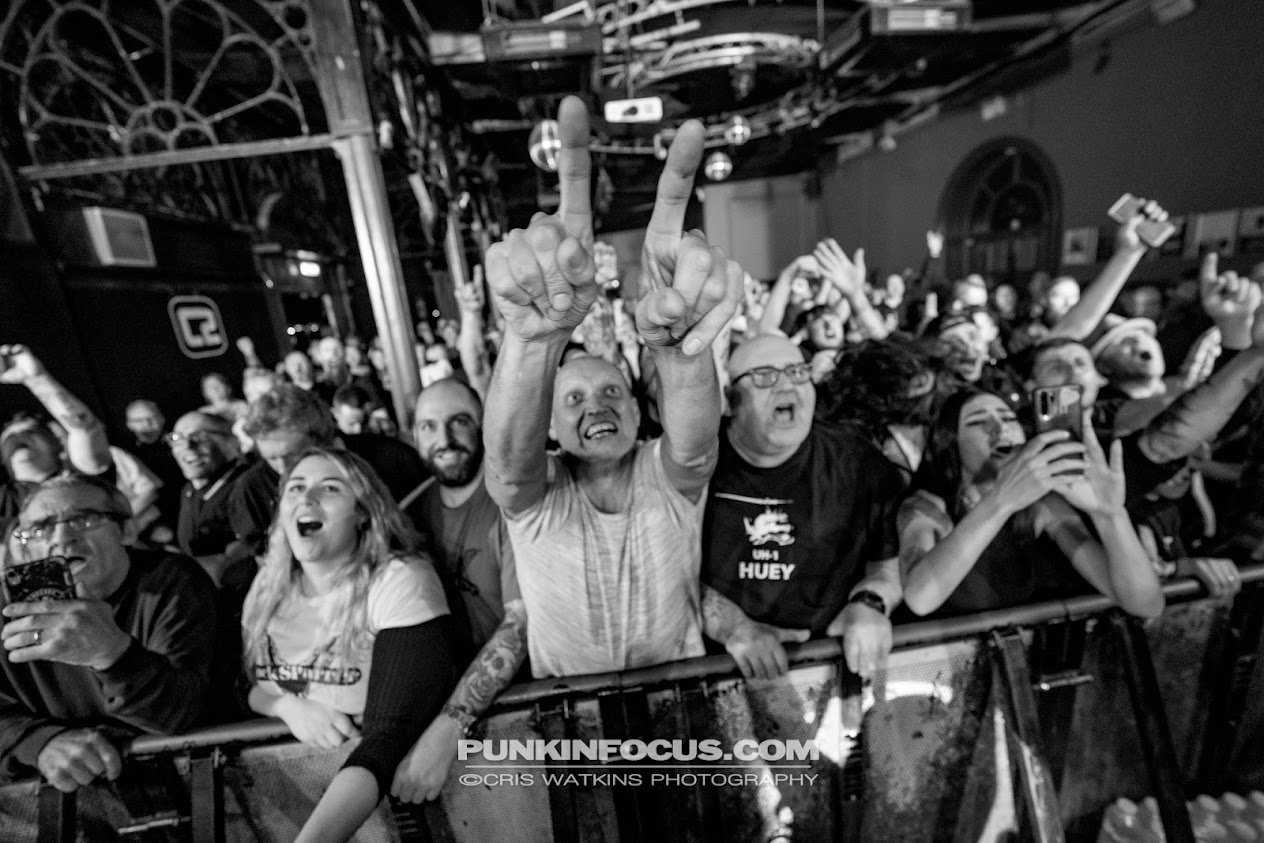 The crowd at the Concorde 2, Brighton 25.9.21  (pic Cris Watkins Photography/PunkInFocus) (click on pic to enlarge!)

It’s been too long, but finally, Cock Sparrer, the original street punks, are back in Brighton at the Concorde 2. The last time here was back in September 2017, on the tour promoting their then album release, ‘Forever’. 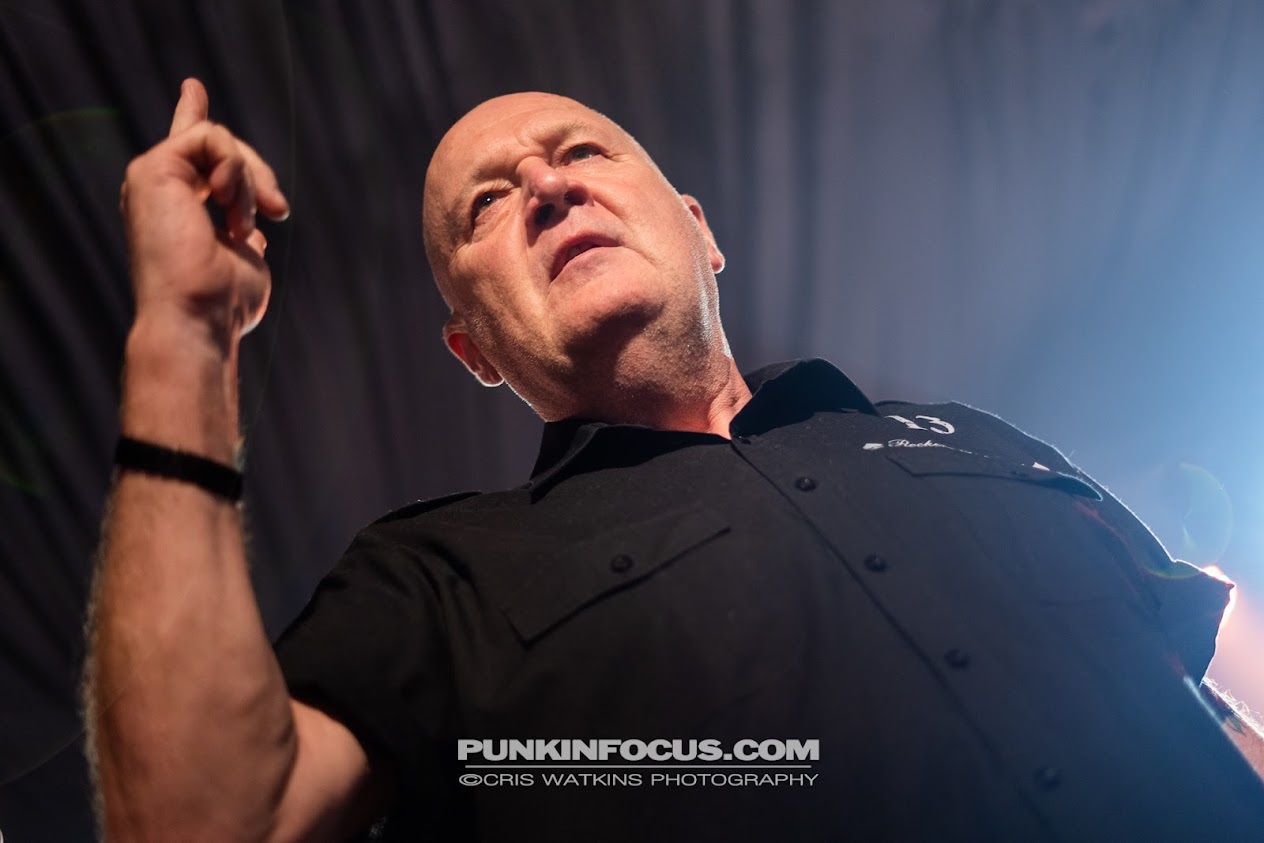 Covid has pushed this show back from its original date in 2020 to now, better late than never, eh?

I was a latecomer to the musical joys of Cock Sparrer. I was introduced to them by my then Glaswegian Skinhead neighbours in the early nineties by way of a few Oi compilations and the first album, ‘Shock Troops’. Still, it would be another 25 years for me to catch them in a live setting here at the Concorde 2 in 2017. Don’t the years just fly by. 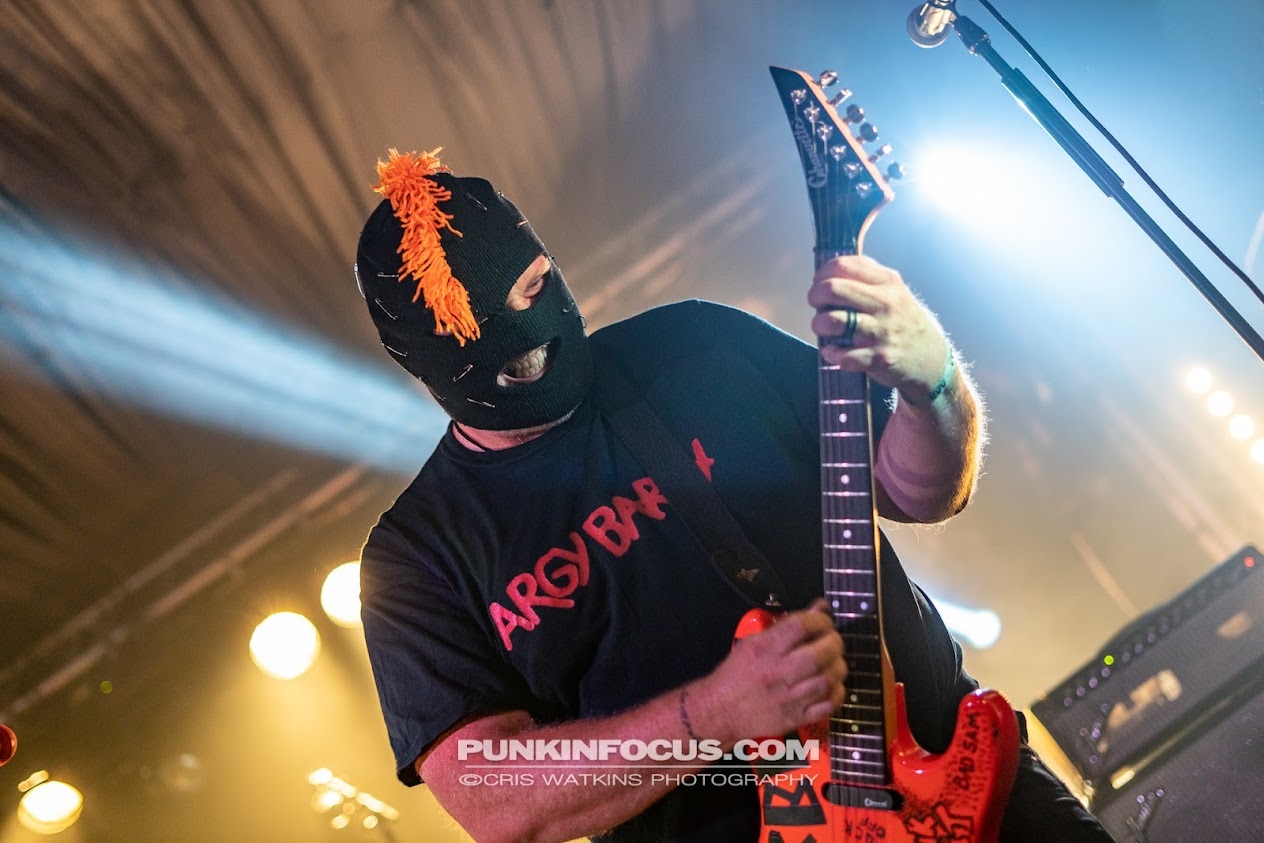 Opening for them tonight are the one and only Sp*nk Volcano And The Eruptions. If fuzzy, fast punk rock with a good dose of humour is your thing, then you’ll be right at home with these boys. Sp*nk Volcano is easily recognisable by the black balaclava he always wears, adorned with safety pins and pink faux fur trim on the top; others will recognise him from cult Corby punk rockers ‘Dirt Box Disco‘. 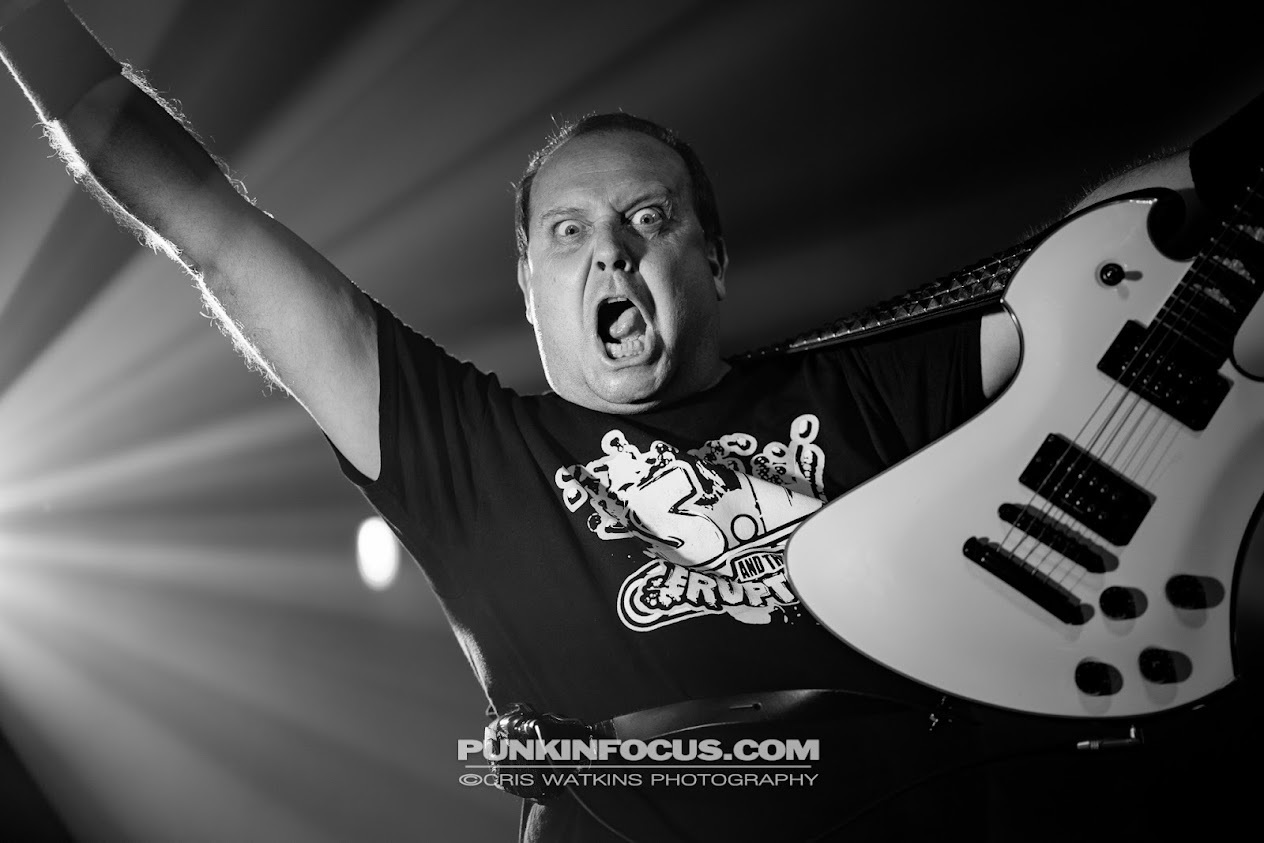 It’s a 30-minute blitz through their catalogue; some old, some new, but standouts are ‘Sellotape’, ‘Platform 3’, a song about “meeting a sexy bird at the train station”, Sp*nk’s words, not mine. It’s a classic pop-punk number and impossible not to sing along to, and so is the classic ‘XR3’, another belter of a track and a real beauty live. It’s all about his love of his old XR3 with some classic lines, “It goes faster, it goes faster, it goes faster than a f*ckin’ Astra”. 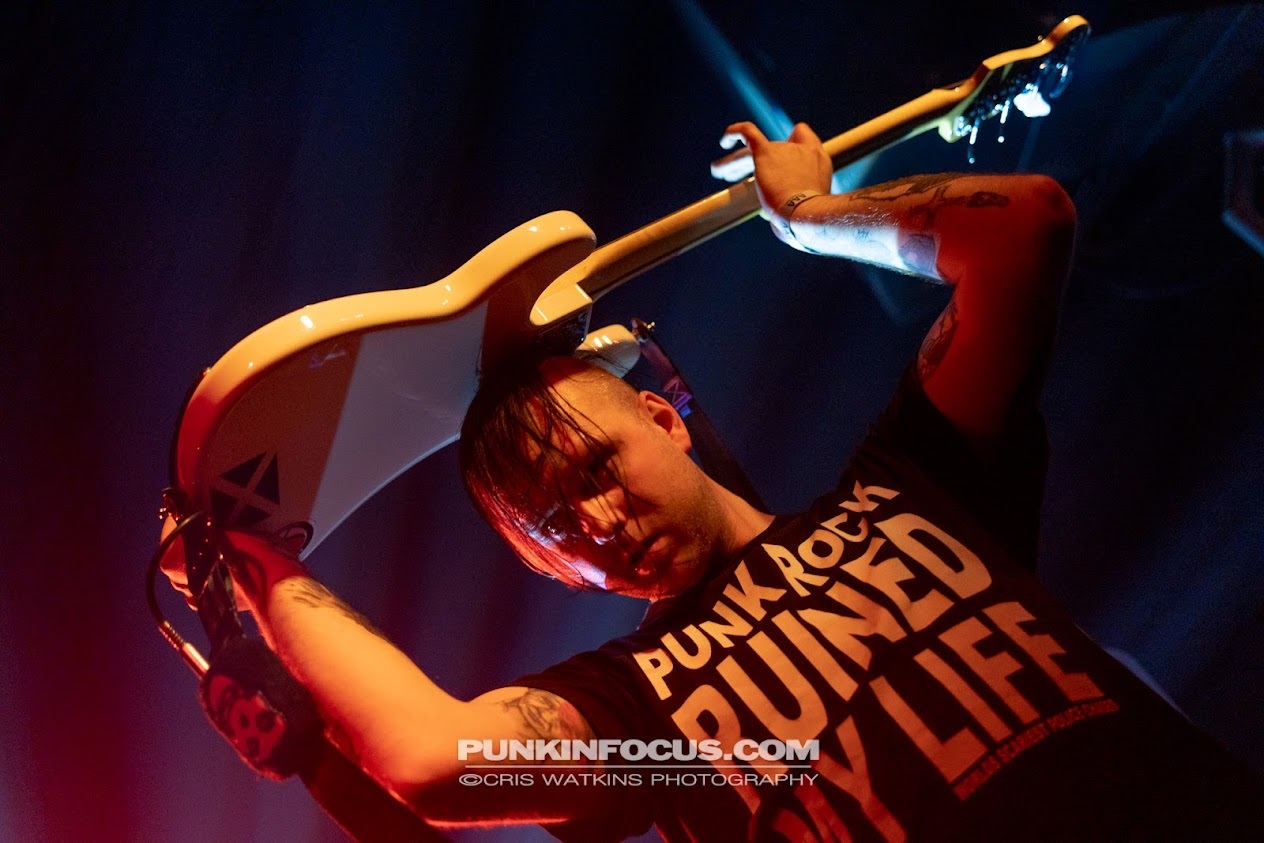 SVATE won’t be to everyone’s taste, but for fans of a fun punk rock night out with a beer-soaked shout-a-long, you can’t get much better, and they indeed went down well with the ever-increasing crowd here tonight. The original daft punk! 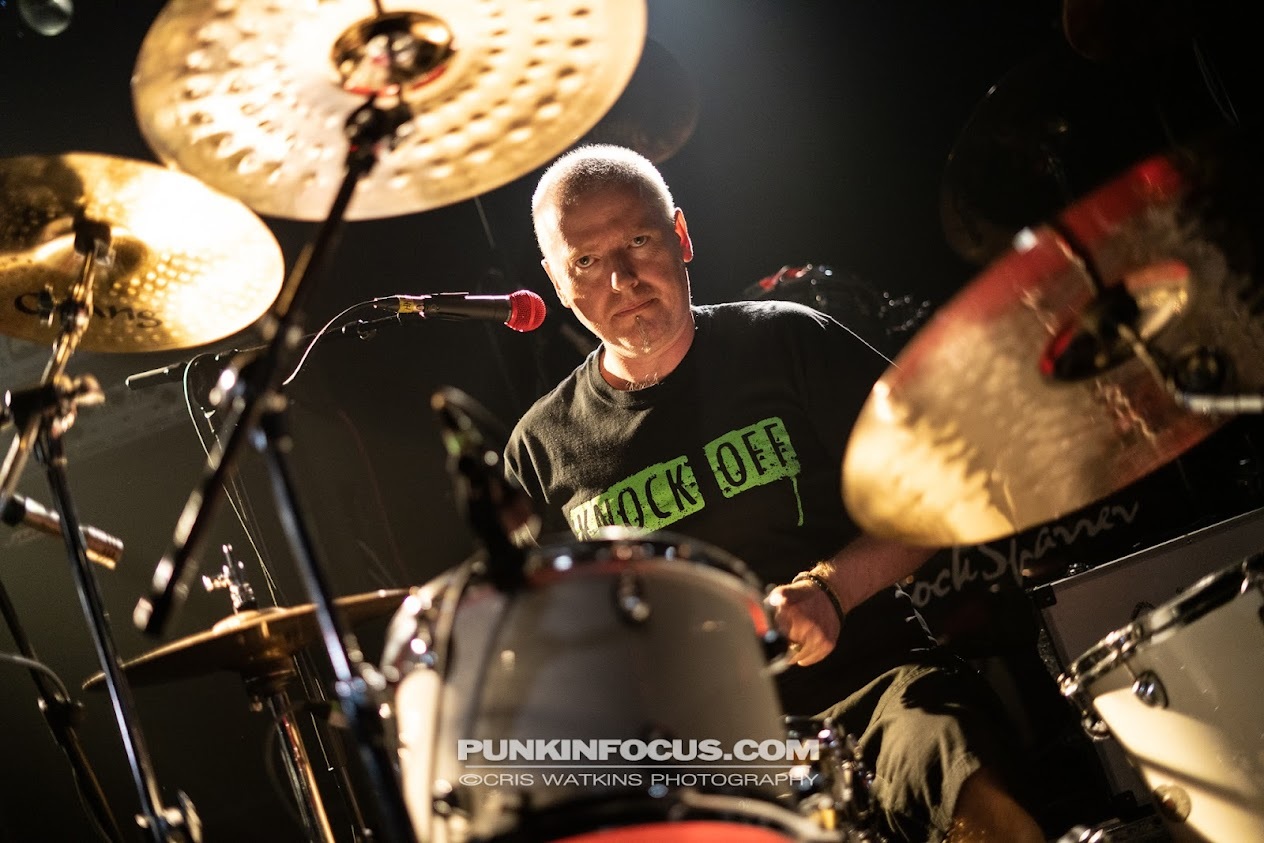 Sp*nk Volcano & The Eruptions setlist:
‘Death Or Glory’
‘Sellotape’
‘Crossfire’
‘Hanging Round The Shops’
‘Only Got Eyes For You’
‘XR3’
‘Platform 3’
‘TV God’
‘Can’t Stop Thinking About You’
‘Teenage Teenagers’
‘DNA Failure’ 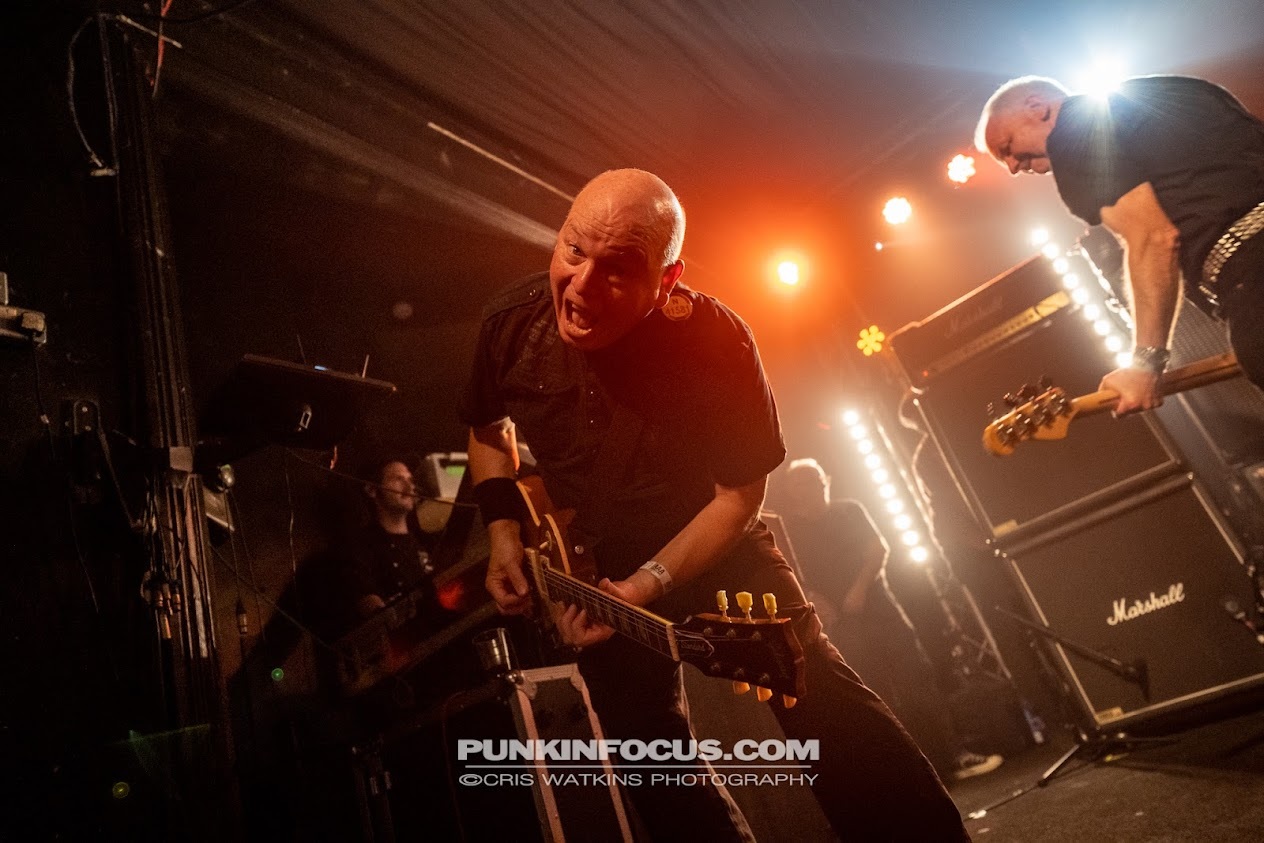 There’s a thirty-minute break for set changes before the intro music for Cock Sparrer emanates through the PA. The sold-out Concorde 2 crowd are certainly up for this tonight, and it erupts as soon as those first notes of ‘Riot Squad’ ring out from Mickey Beaufoy’s guitar, with pints flying everywhere. It’s a good old fashioned punk rock evening. Saying that, the crowd here is probably a 50/50 mix of punks and skins with a fair few younger faces amongst them. 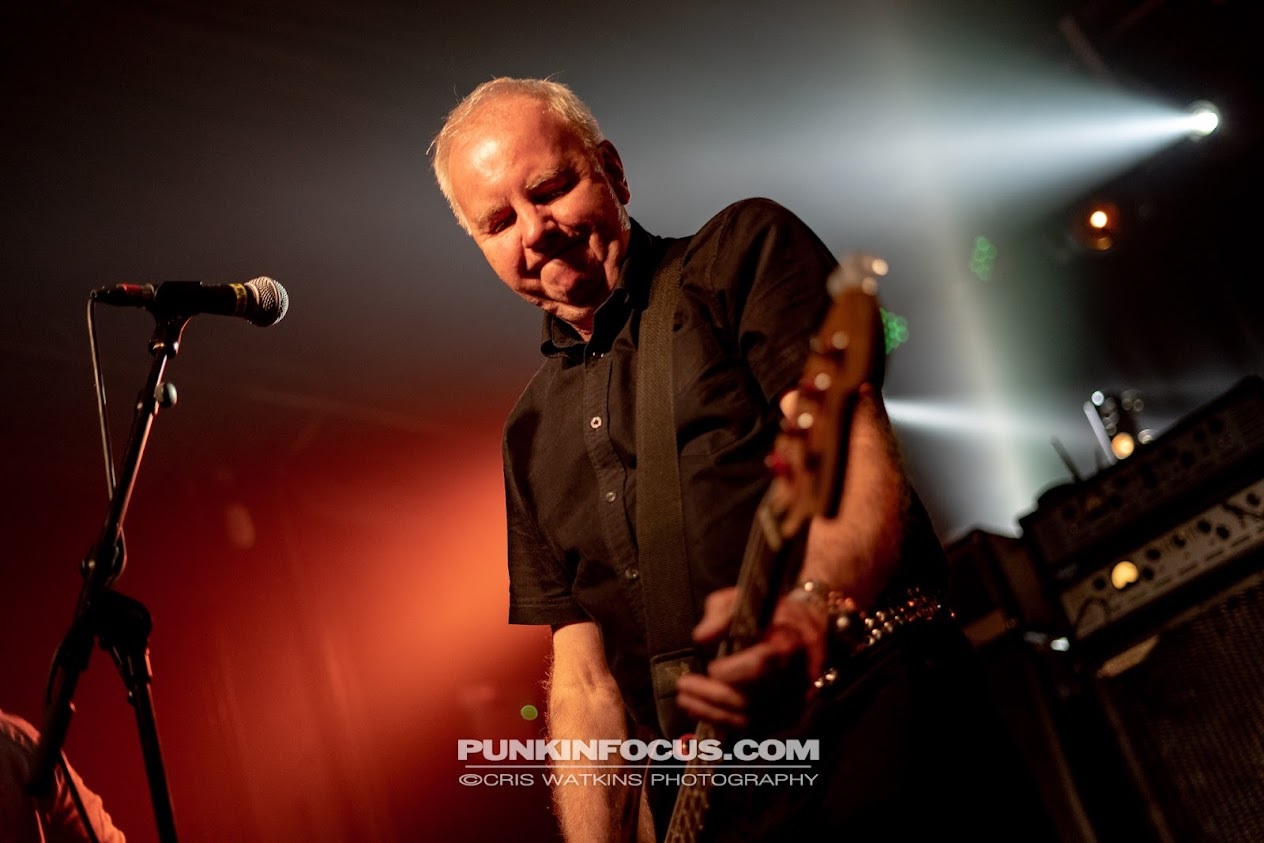 This evening’s set is ultimately a ‘best of’ with seemingly every classic you’d want to hear getting an airing in the 75-minute set. ‘Working’ sounds as fresh as it did all those years ago with Colin McFaull’s faultless vocals, and so too ‘What’s It Like To Be Old’ now performed by a bunch of 60-year-olds, oh, the irony and they’re well aware of it too! Amazingly, Cock Sparrer will have been around for 50 years next year. No wonder they are such a tight unit on stage tonight as they blast out punk classic after punk classic, and long before we get to the encore, I can already feel my voice going. 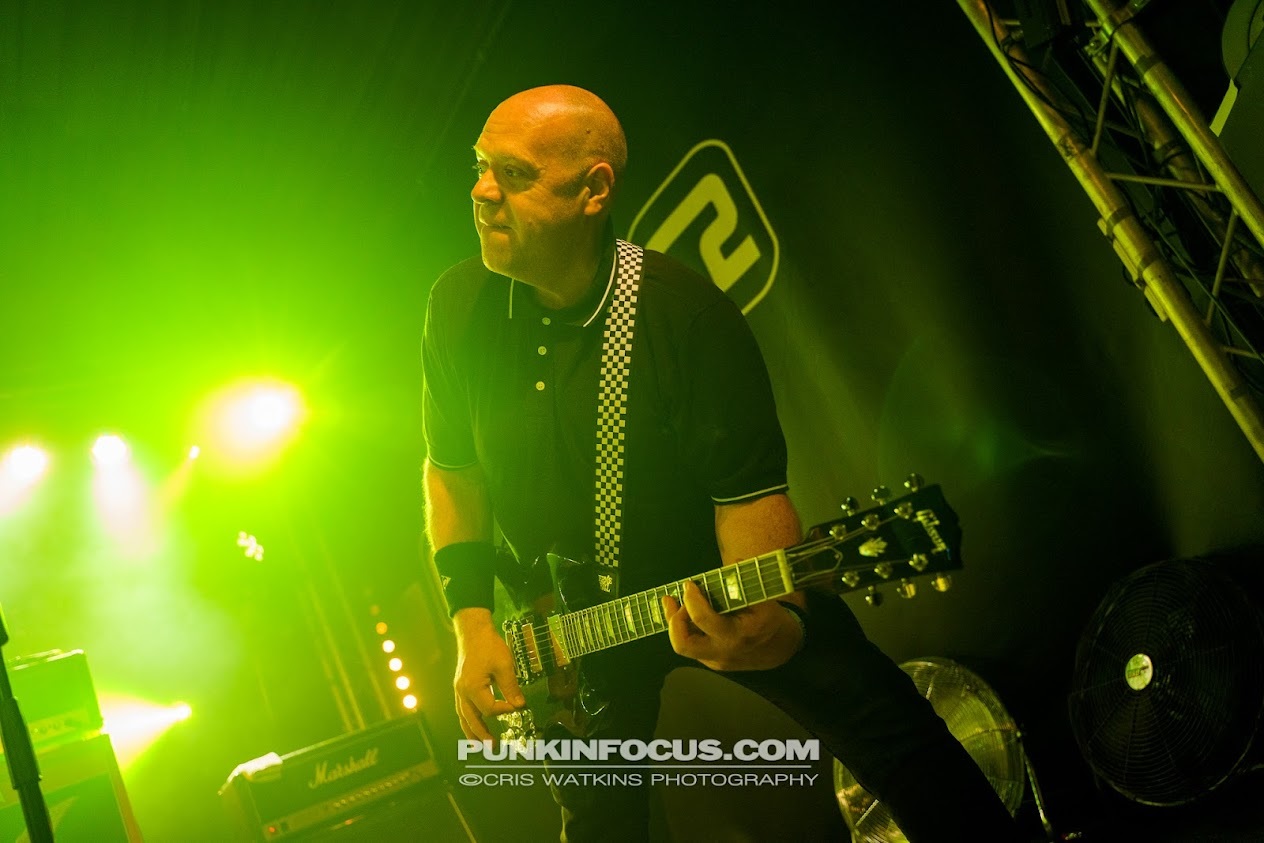 Highlights of the set for me, though, a great run-through of ‘One By One’ from their latest offering and already a massive live favourite. ‘Take Em All’ nearly takes the roof off, and ‘Running Riot’ probably gets the wildest pit of the night so far. Another that deserves a special mention is a magnificent rendition of ‘Nothing Like You’ again from the ‘Forever’ platter. I’m going to have to give this album another spin tomorrow once my ears stop ringing. The final song of the set is a storming blast through ‘Where Are They Now’. 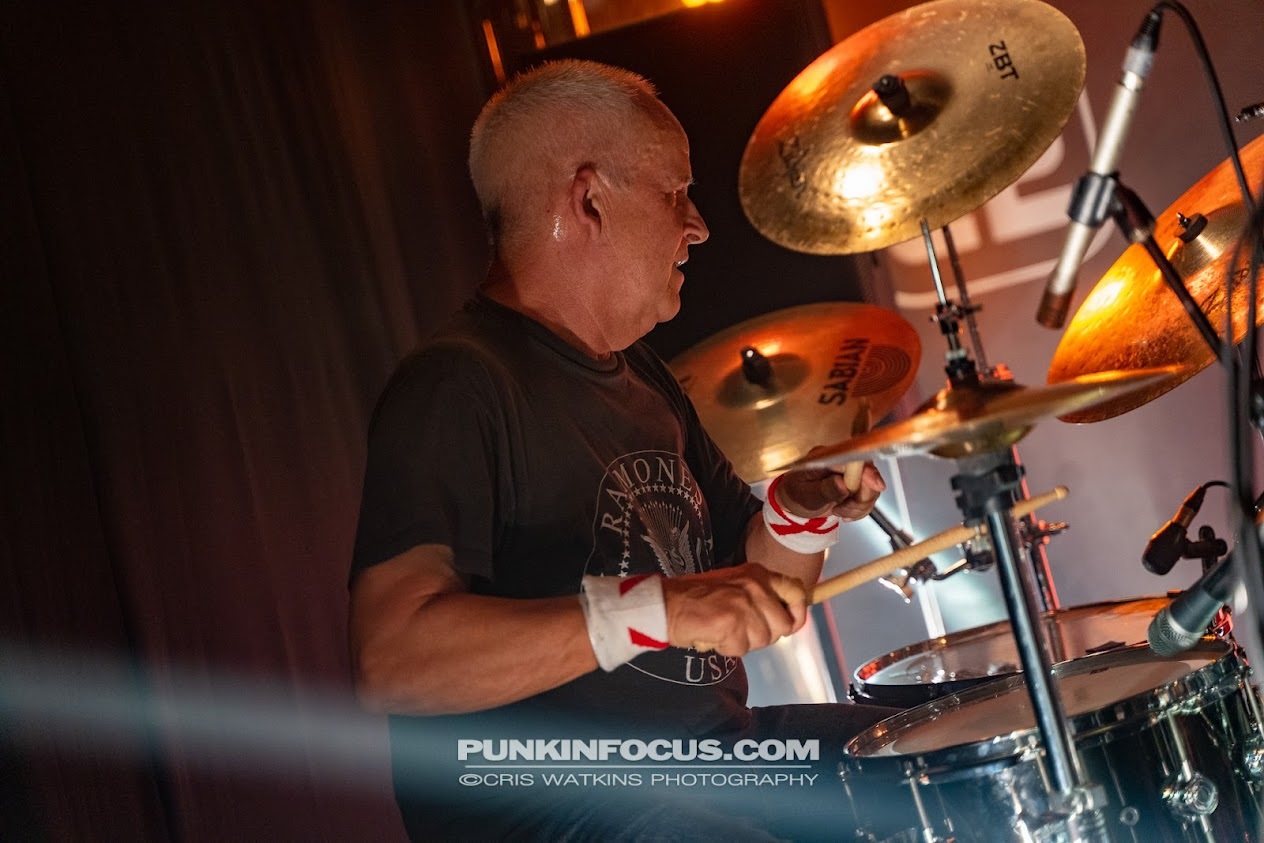 A show these days isn’t complete without the obligatory walk-off, only to come on a few minutes later, and Cock Sparrer duly obliged. The encore consists of three fist-pumping, lost voice inducing, beer throwing killer anthems. ‘Suicide Girls’, a barnstorming ‘England Belongs To Me’, but the closing number seals the deal, ‘We’re Coming Back’ is a triumphant roar of pure punk and R’n’B played to perfection and almost brought a tear to the eyes. 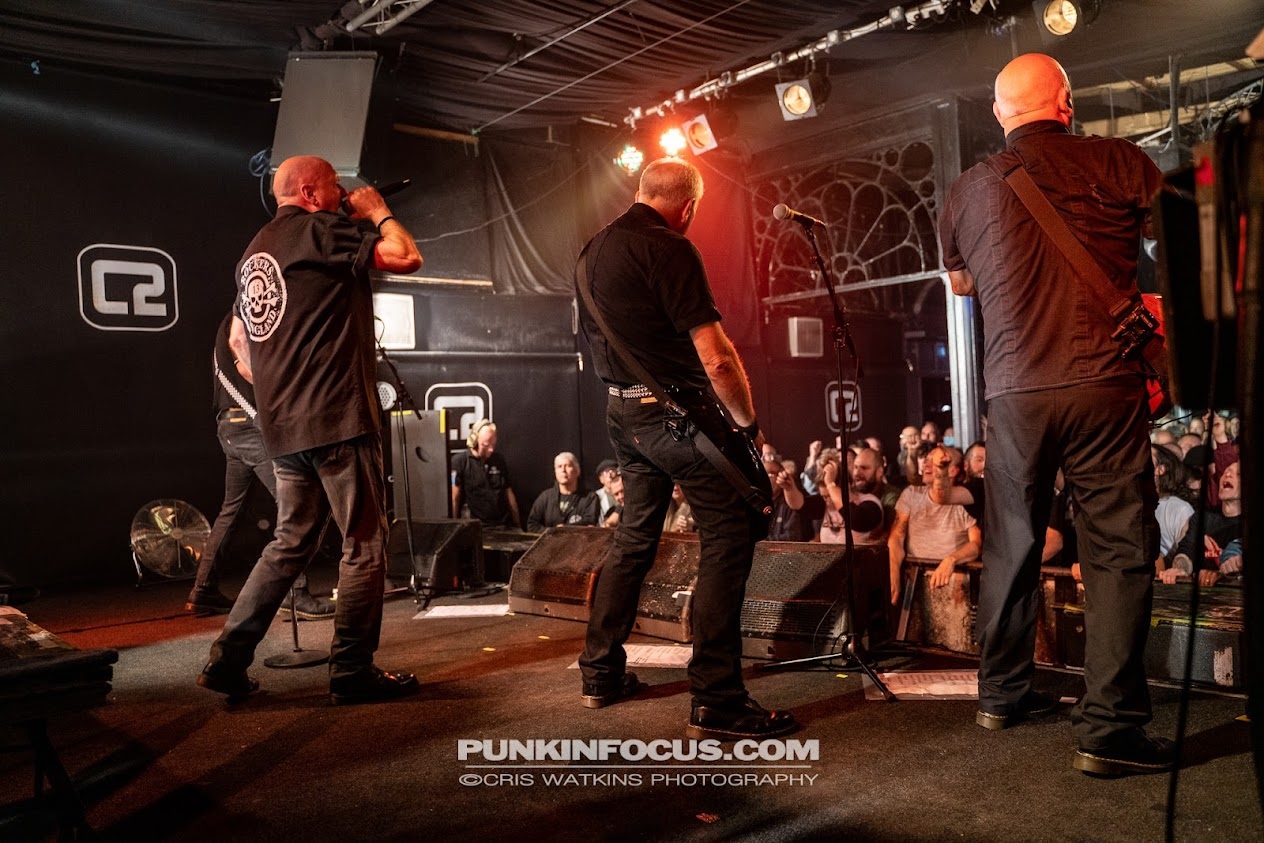 It’s hard to believe these bandmates and friends since school days still more than cut the mustard live, and give the new punk bands on the scene a run for the money.

Big thanks to the Concorde 2 staff and security for keeping it a not only joyous night but a safe one too! 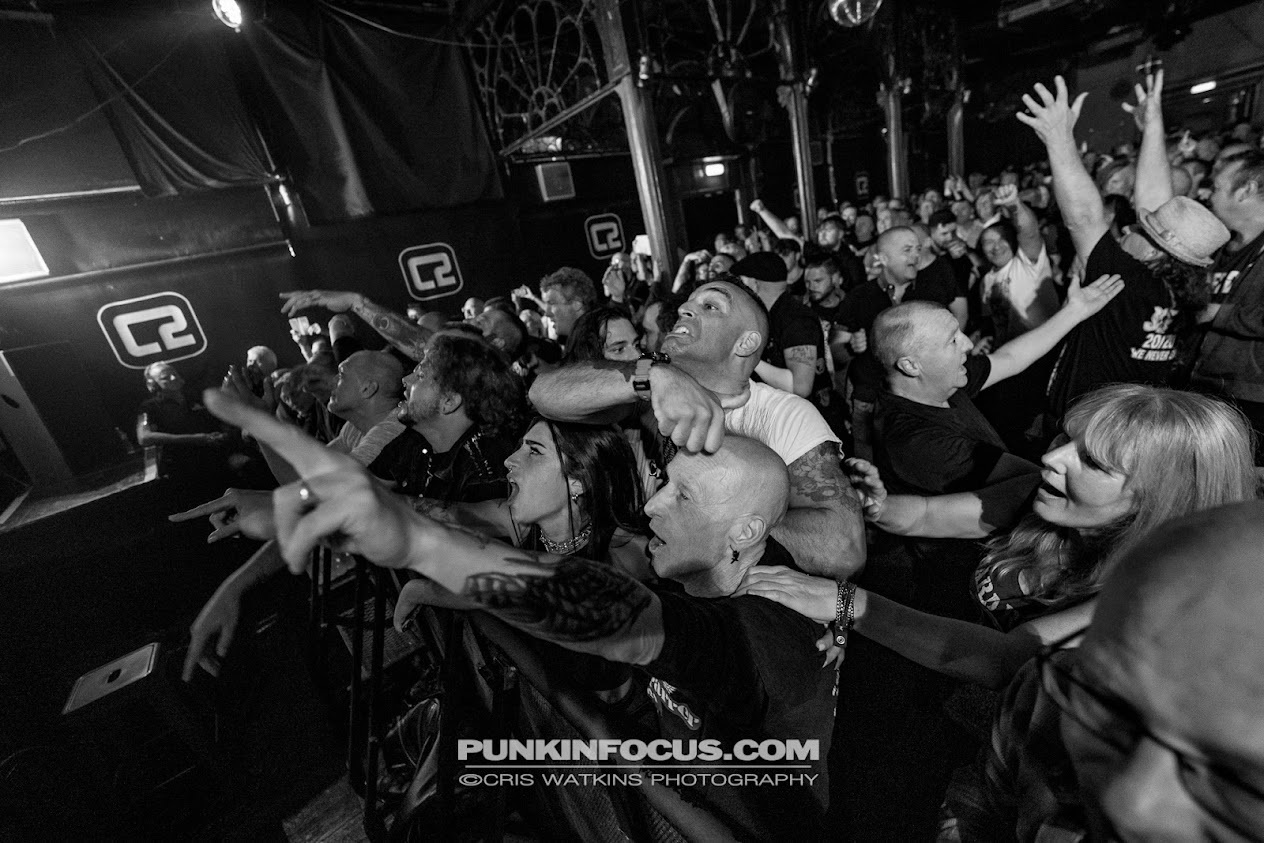 The crowd at the Concorde 2, Brighton 25.9.21  (pic Cris Watkins Photography/PunkInFocus) (click on pic to enlarge!) 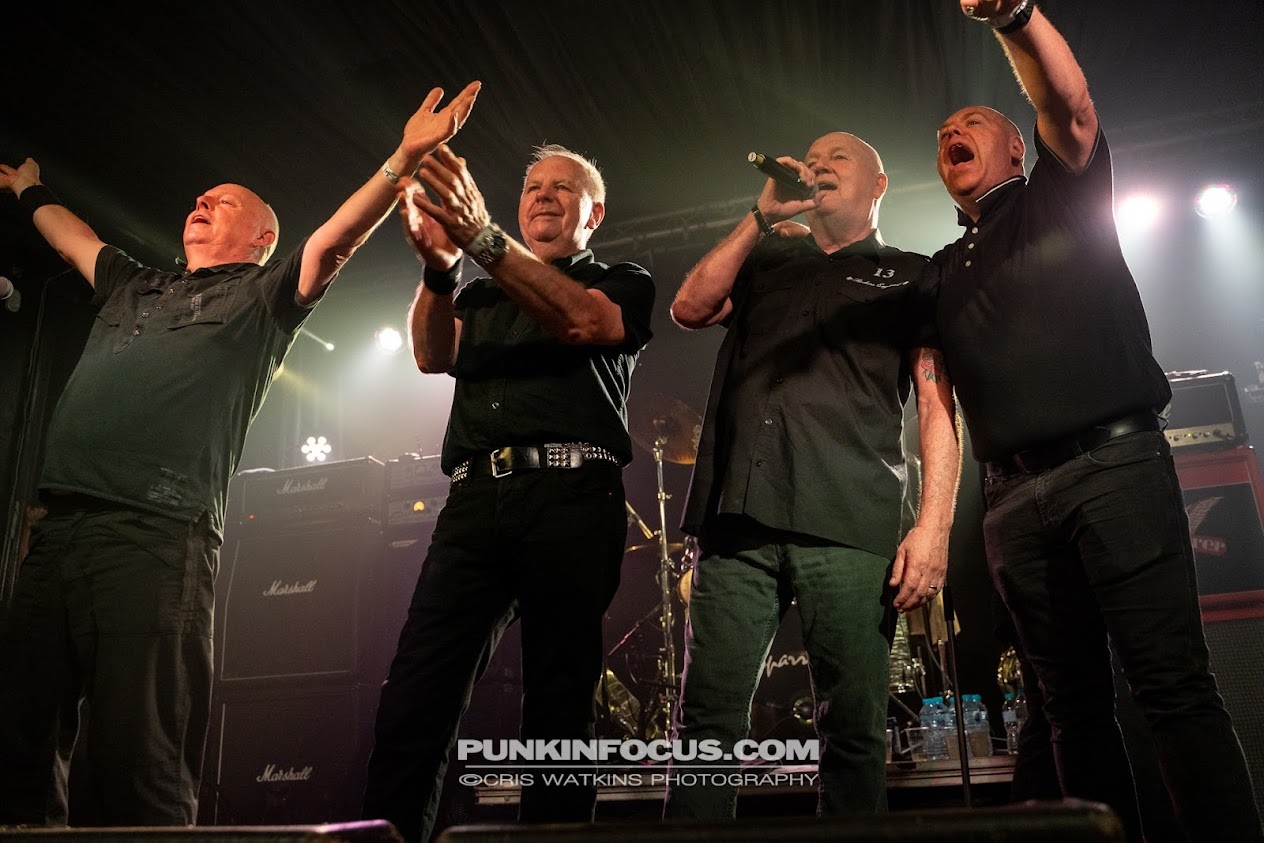 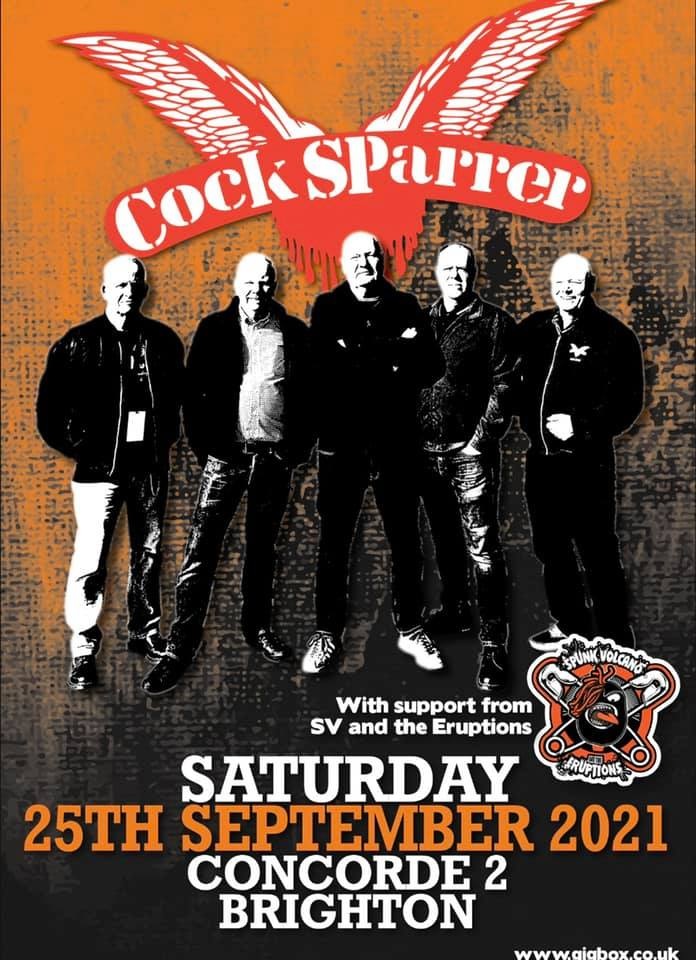 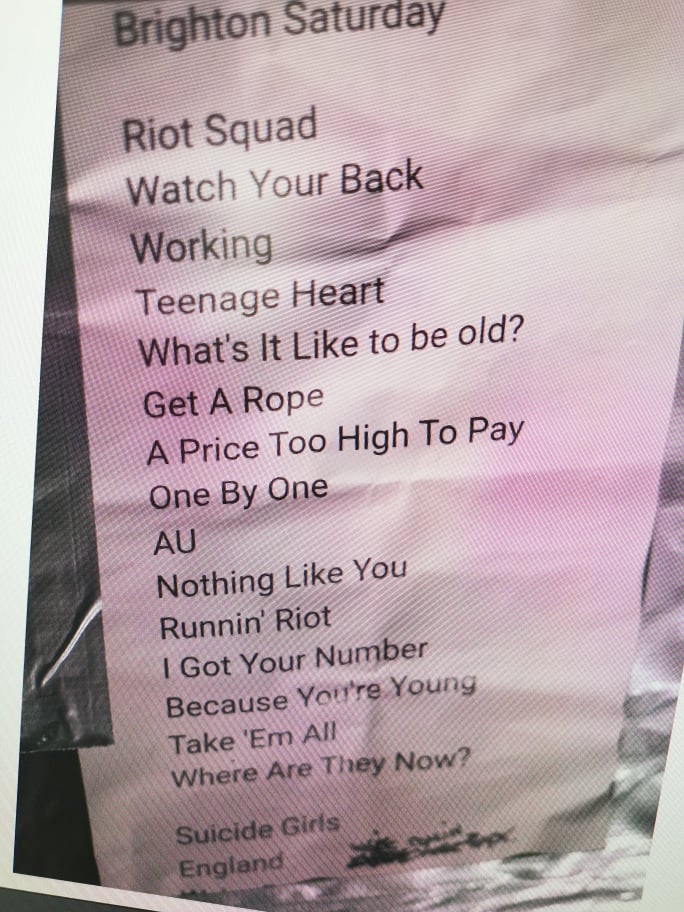 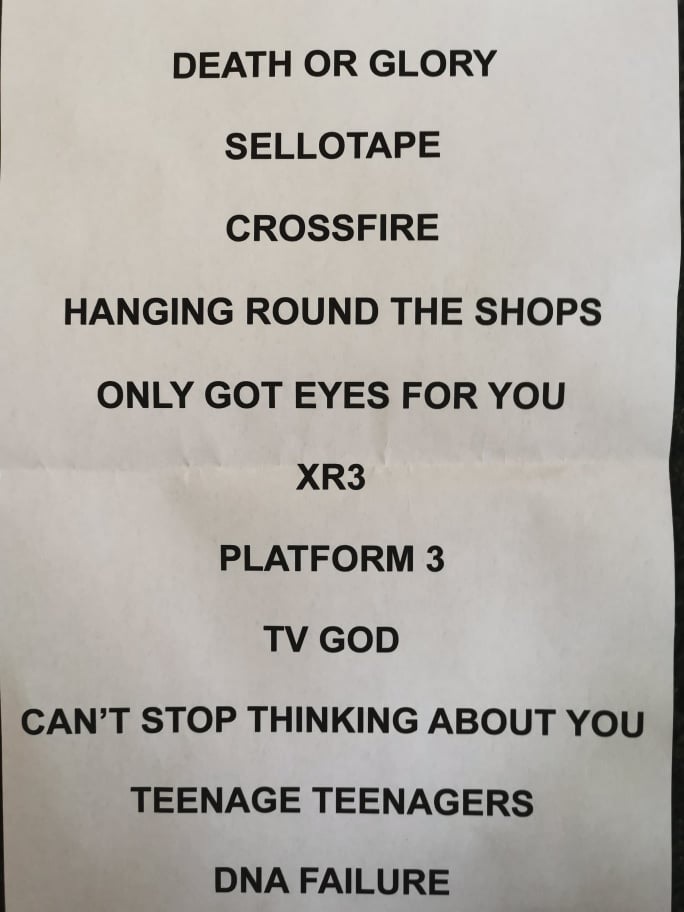