We tuck in to ‘Punk Sunday Lunch’ in Brighton 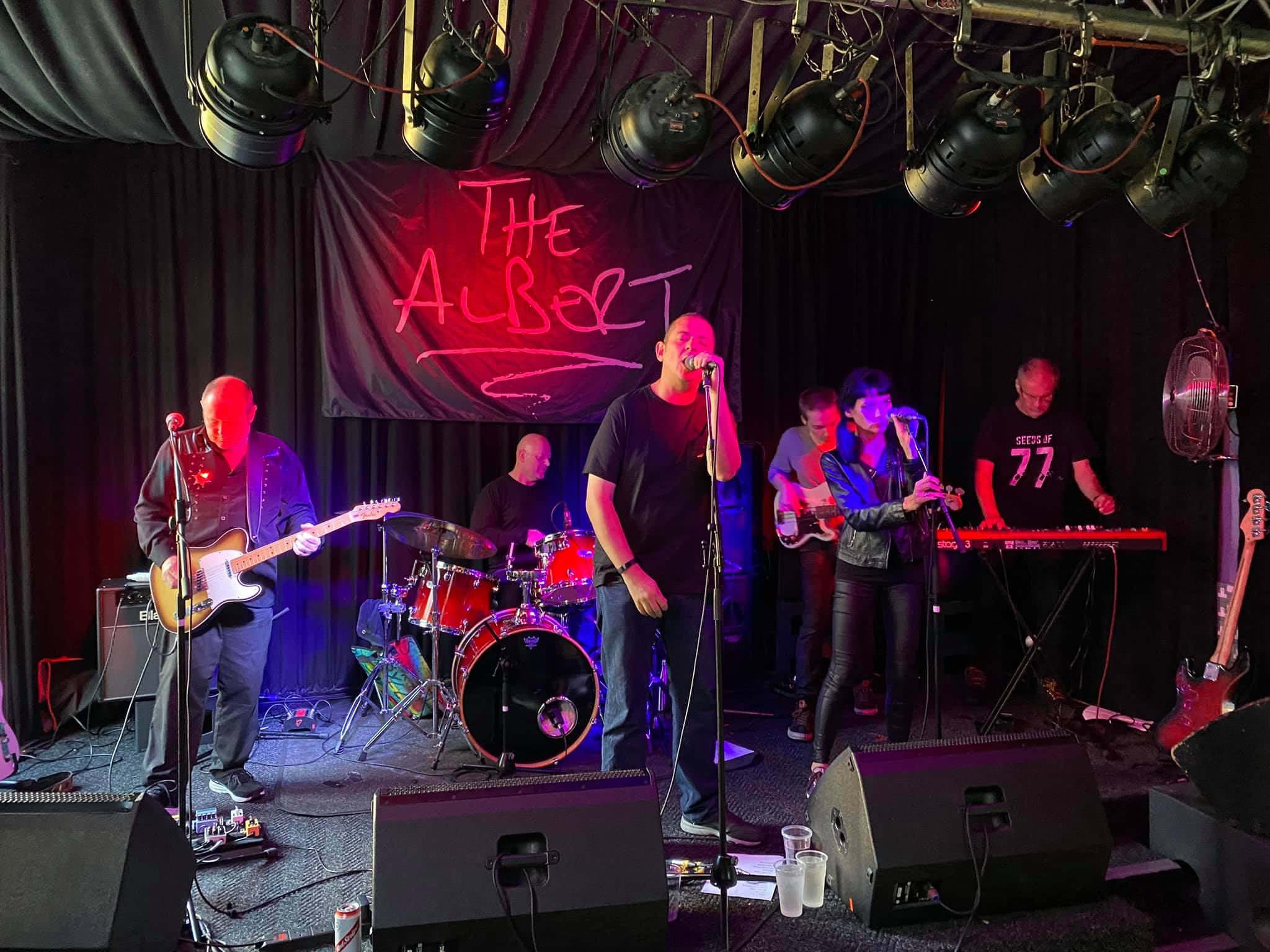 A Sunday matinee show may not be the usual environment for luminaries of the DIY punk scene, but An Alternative Gathering’s ‘Punk Sunday Lunch’ at The Prince Albert in Brighton has drawn an impressive crowd. There are plenty of familiar faces, and a quick chat at the tables outside the pub confirms that many people here have travelled to Brighton from all over the South East. With three excellent bands for just £5 in advance, the biggest share of today’s take must have gone to the train operators.

Showtime is 2pm until 5pm, so there’s time to choose from the extensive selection of real ales before heading upstairs. I like the set up at The Prince Albert. It’s a square room with uninterrupted sight lines to a decent sized stage, and I really appreciate the array of electric fans keeping the audience cool. Today, unusually, the stage lighting is supplemented by some ambient daylight coming through the windows. 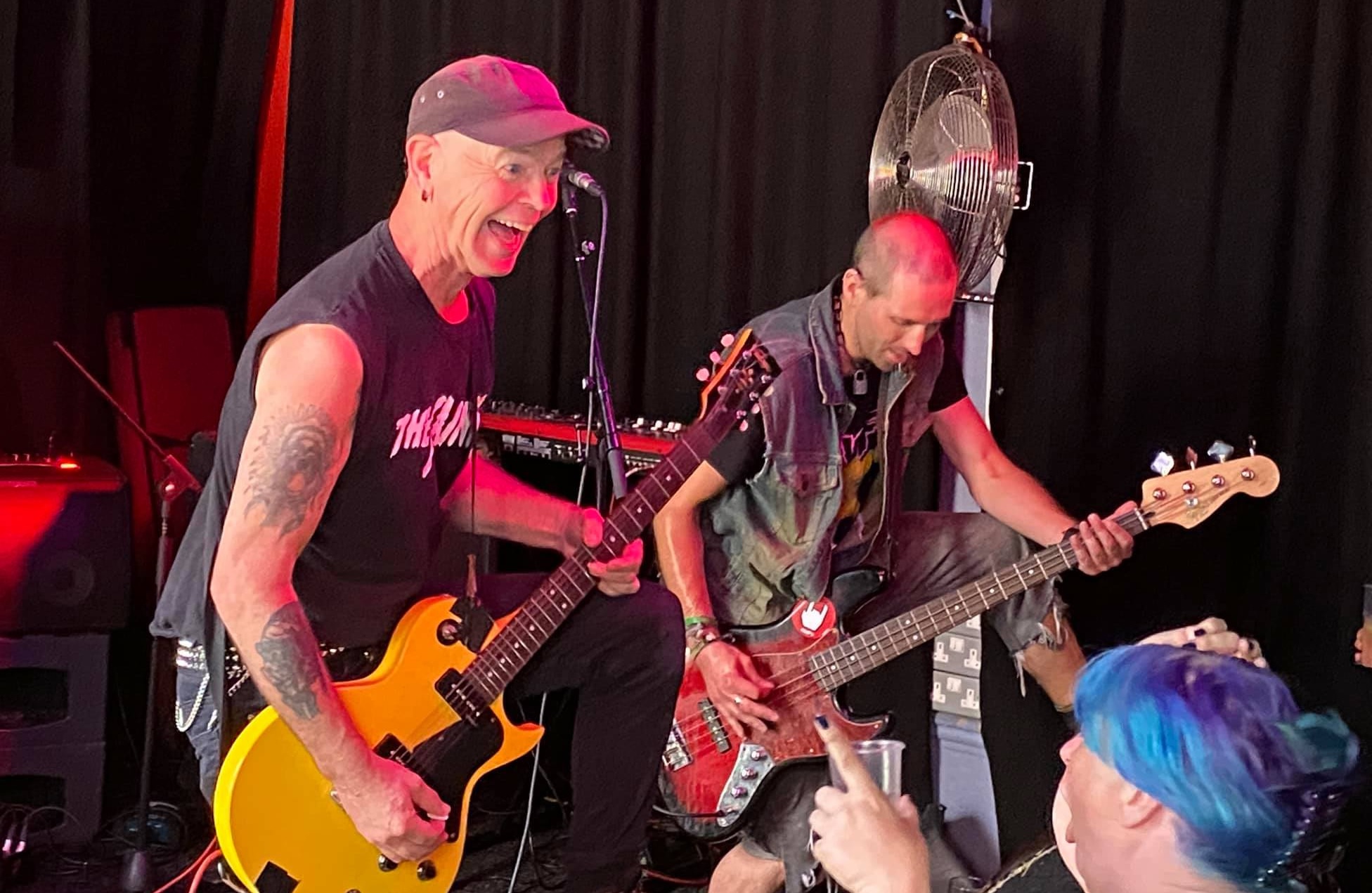 First up are Rage DC, a four-piece from Bracknell in Berkshire, formed in 1996. Stalwarts of the punk scene, they are regulars at Undercover Festival, which is where I know them from. They’ve self-released at least three albums and two EPs that I’m aware of, and have a loyal and devoted following which makes them a popular choice for opening act, as canny promoters know they’ll bring the punters in early. 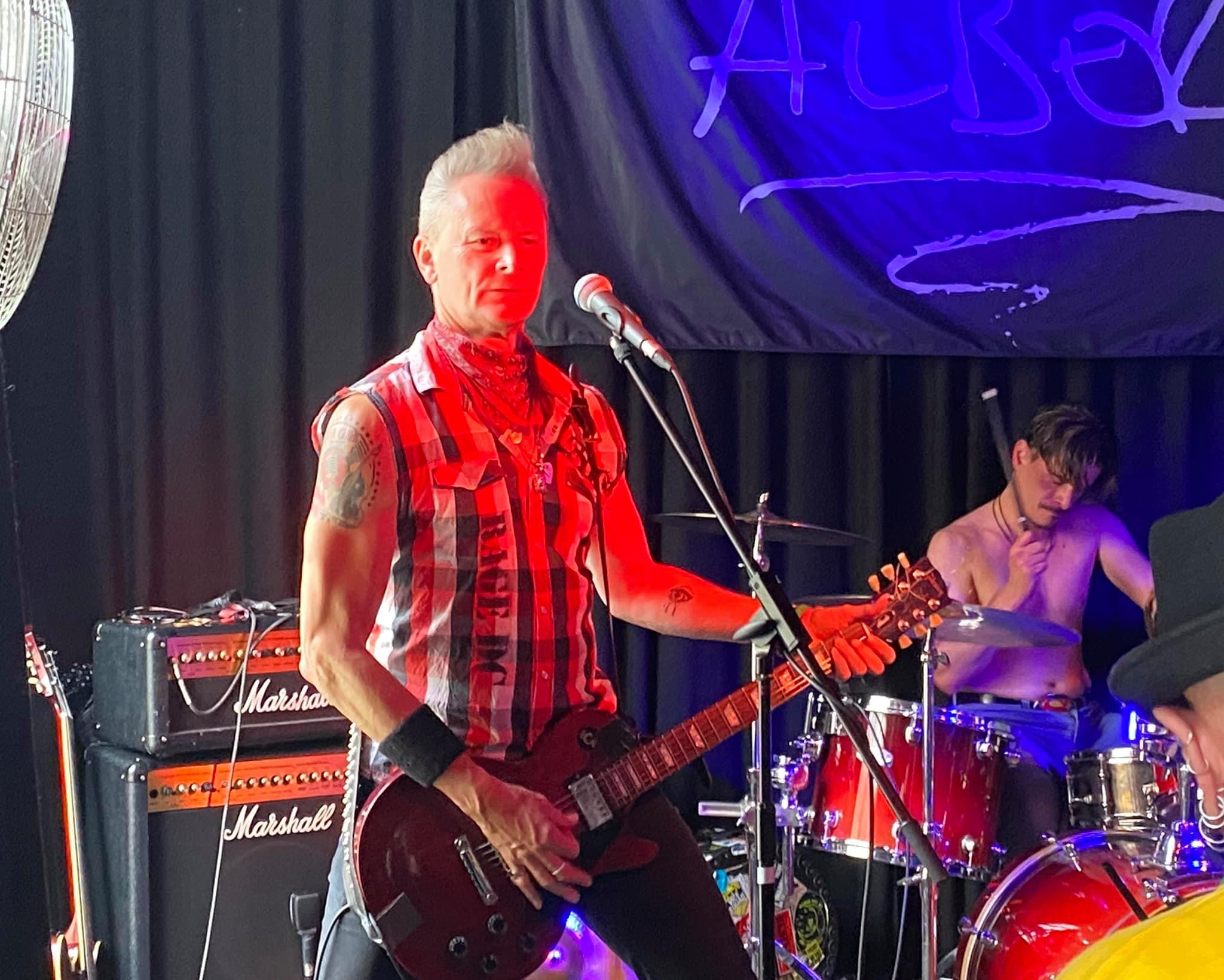 The music is what I would describe as ‘old school’ punk, in that it has clearly structured tunes, with catchy hooks and chant-along choruses. It’s lively stuff, delivered with power and passion. Vocalist and songwriter Loric is fizzing with energy, pulling cool shapes and spitting the lyrics with vitriolic fury. Second guitarist Graham wields a low-slung Les Paul and sports a rock’n’roll look, his high-rise quiff firmly resisting the blast of a nearby electric fan. Bassist Chris rocks a skater dude style, and gets some serious air under frequent leaps and bounds, flinging scissor kicks and heel flicks as he careers around the stage like a jumping jack. Moustachioed drummer Ziggy thunders around the kit with impossibly brisk and tight fills. The band are a seriously impressive unit.

The songs are all great, and it’s difficult to single out particular favourites. There are strong numbers from the most recent album ‘Punk To The Bone’, including the obvious contemporary relevance of ‘Austerity’, although the set is a varied selection from all the releases I’ve come across. The real rabble-rousers seem to work best. ‘Make A Noise’, ‘All I Hear’ and the ever-relevant celebrity-scandal-focused ‘RIP Mr VIP’ all elicit much chanting and punching the air from the audience, including yours truly. Rage DC have three albums streaming, if you want to check them out. Better still, catch them live, where they’d be delighted to sell you physical copies. 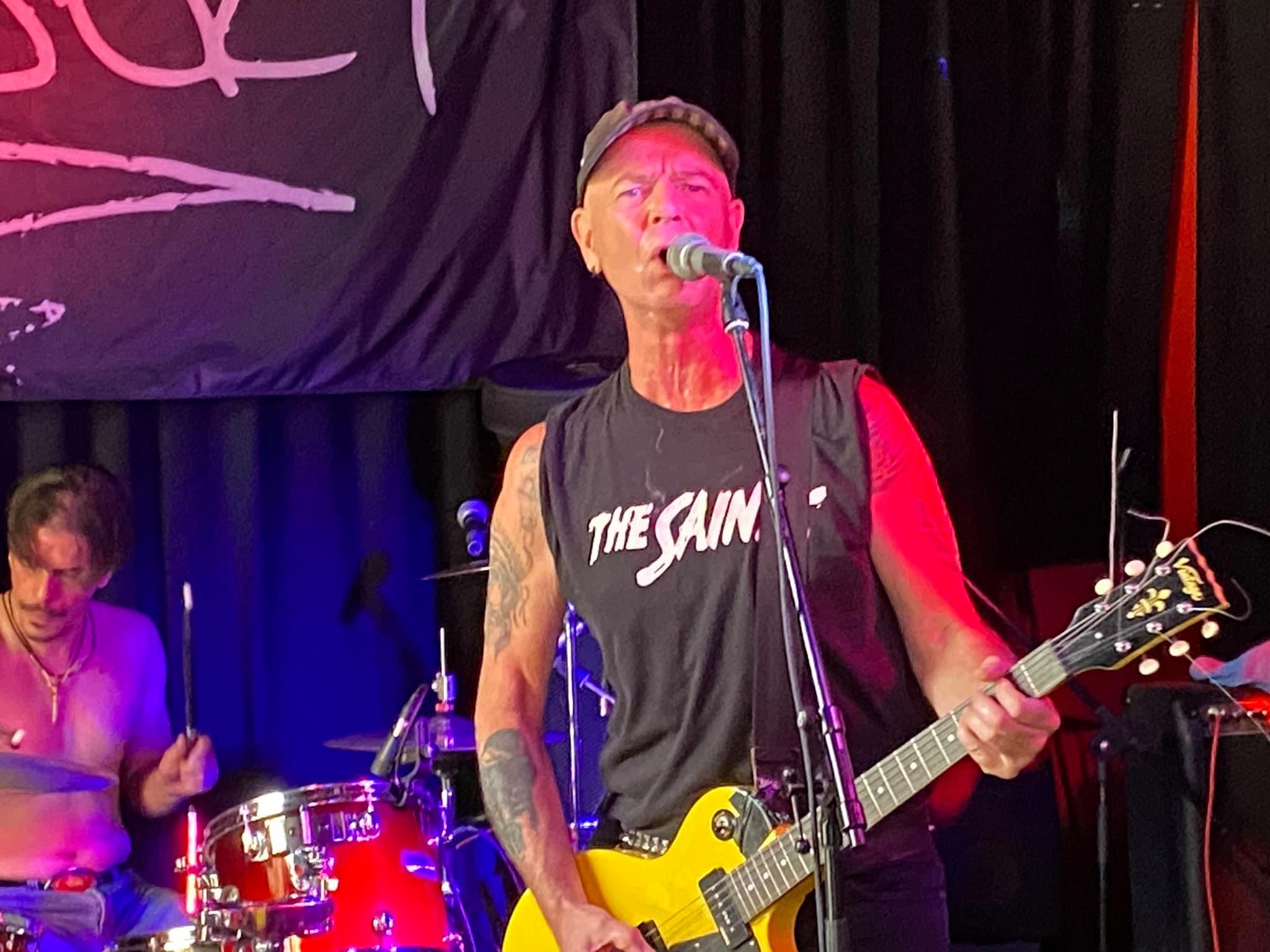 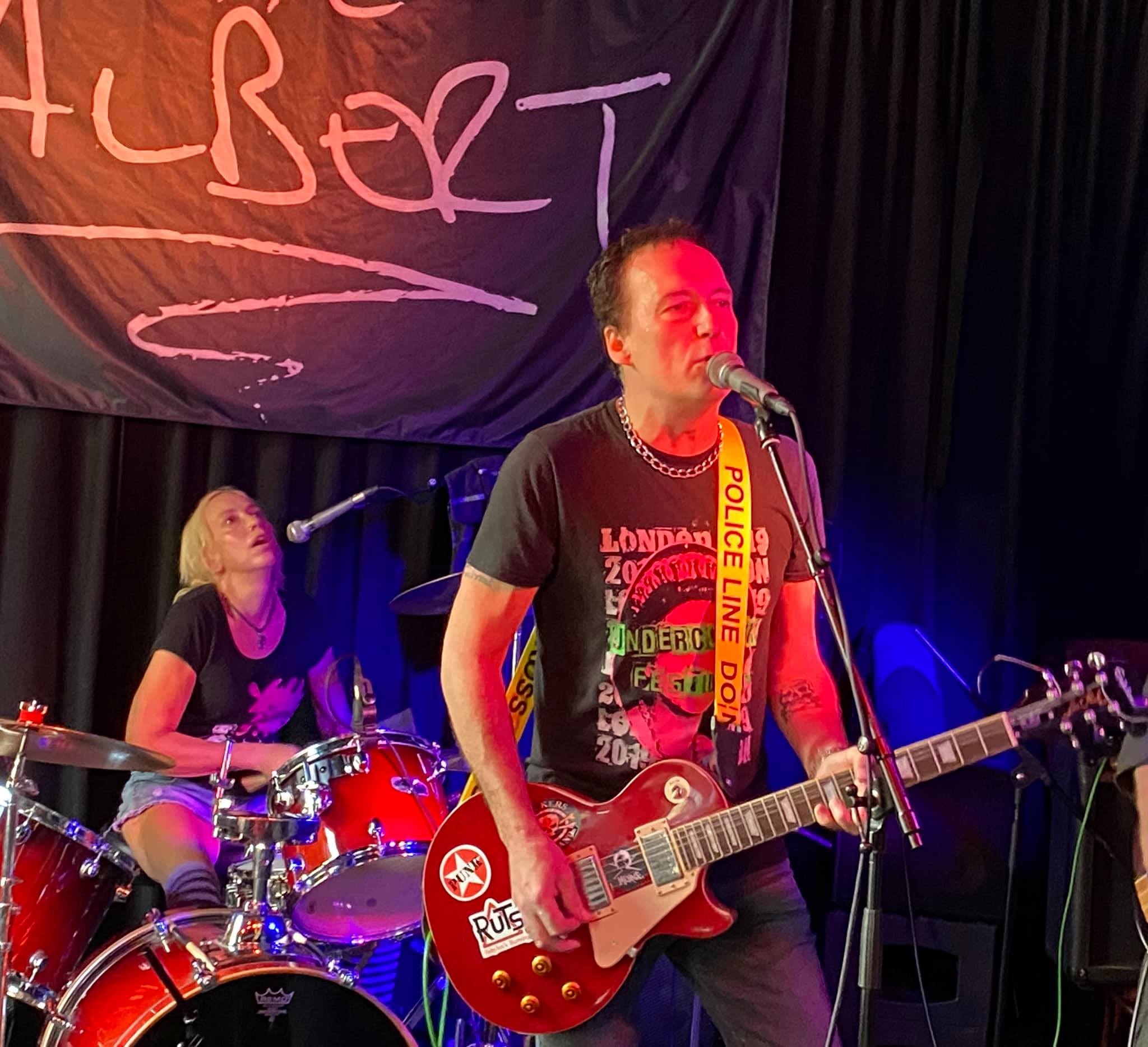 Next up are Anoraks, a four-piece from East London, also active since 1996 and sometimes styled as The Anoraks. After some line-up changes, they are currently focused on promoting their latest self-release ‘F*ckology’. I won’t need to spend too long working out the set list, as they announce they are going to perform the album in its entirety. 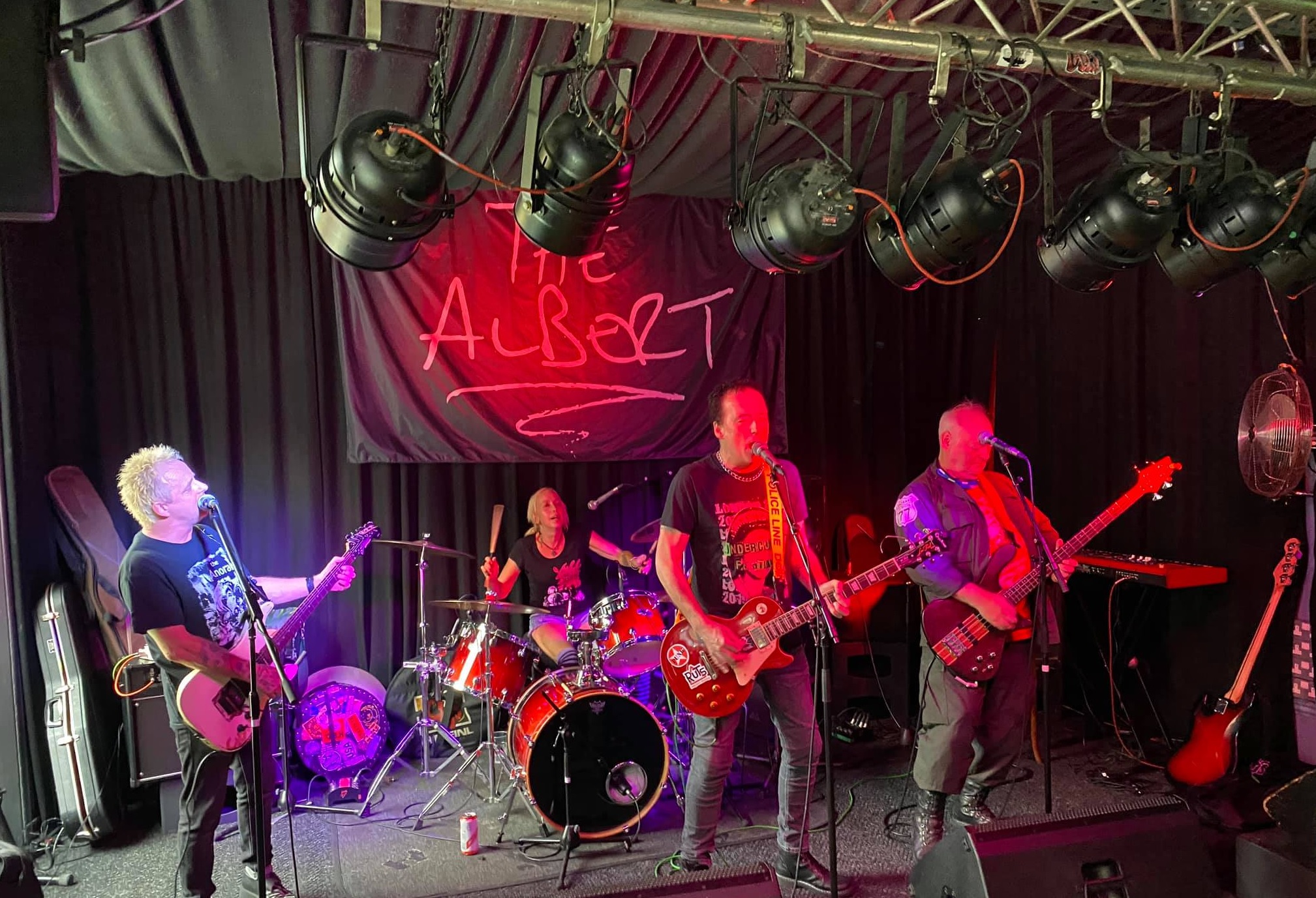 And what an album it is! Twelve sharp, hook-laden songs, with a sparkling pop sensibility and witty lyrics that frequently reference the classic punk canon. There’s plenty of variety, with the lead vocal switching between frontman Gary, drummer Bev, and lead guitarist Rob, with bassist Glenn providing backing vocals. The sound is generally very good, although the delightful clipped flurries of lead guitar are teasingly low in the mix. It’s usually standard practice amongst punk bands to have the backline amps too loud to hear the monitors, and Glenn raises a chuckle by complaining that all he can hear is a “big rumbling thud”. That’ll be the bass then.

All of the numbers are absolute crackers, although ‘Anorak Dub’ particularly stands out for me with a superb punky reggae feel that I could happily listen to all day. If classic punk is your thing, I thoroughly recommend checking out the album, which is available direct from the band or via their Bandcamp page. 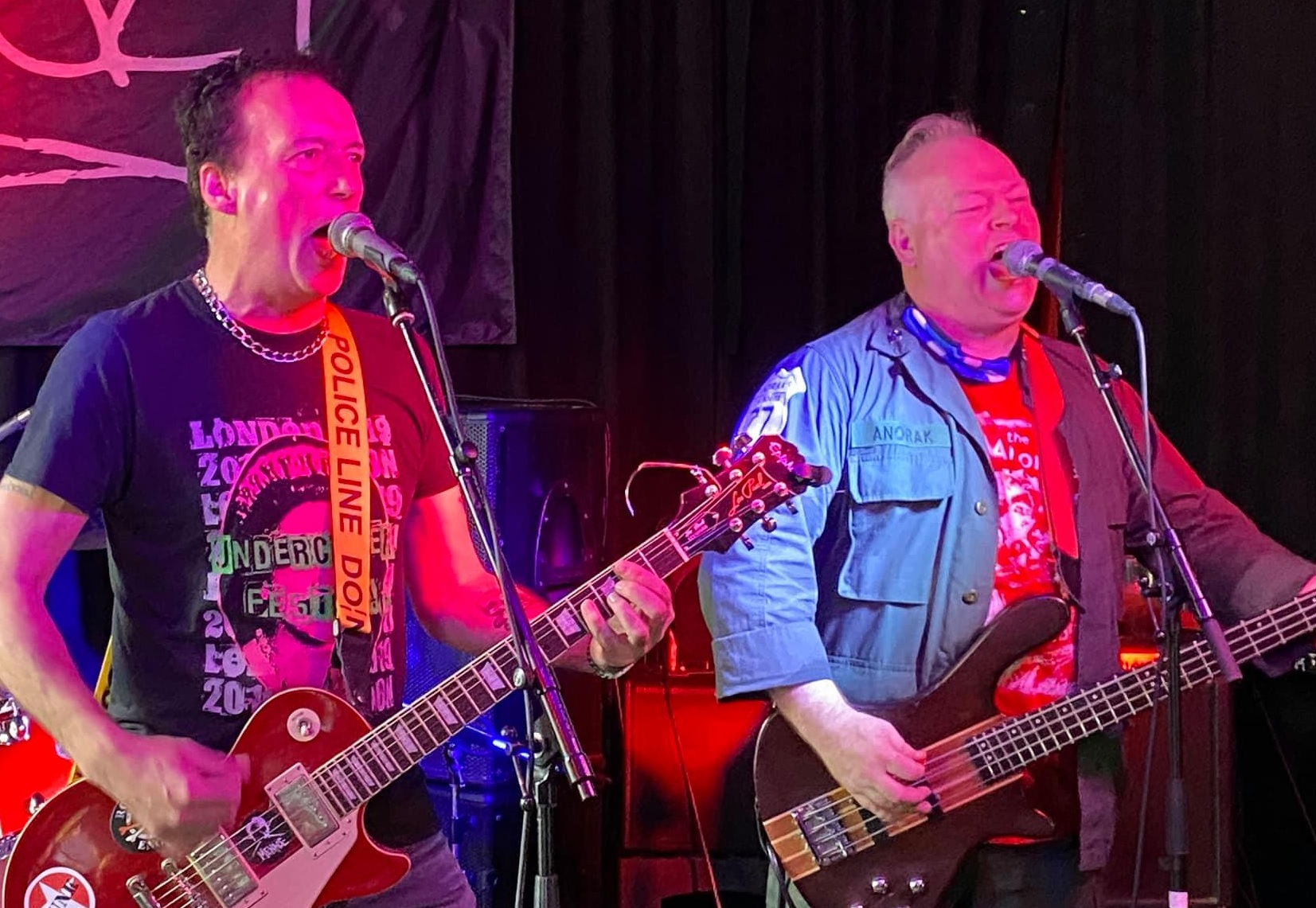 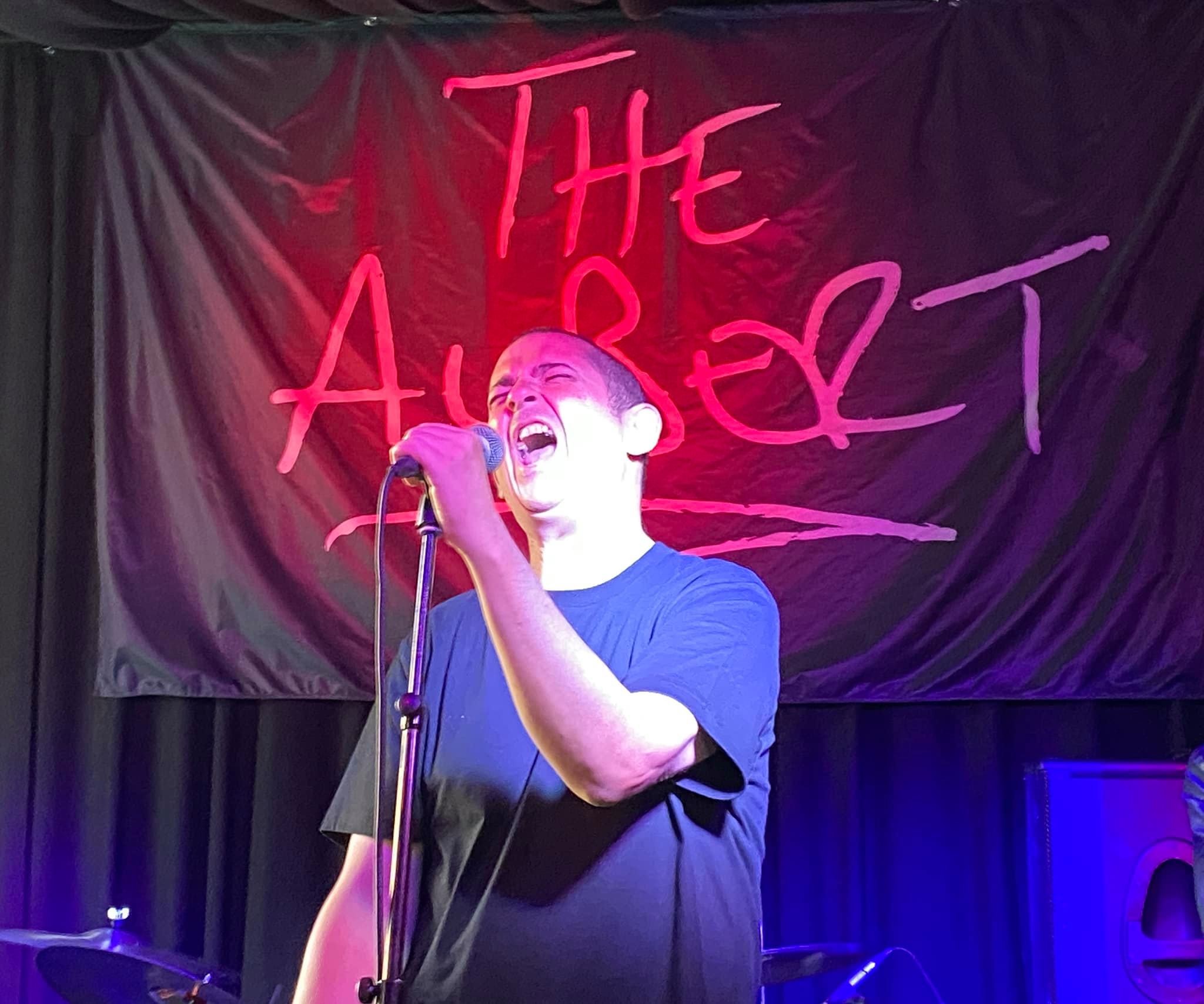 Finally on this afternoon’s excellent bill, we have Seeds of 77. Formed relatively recently, I think of them as something of a post-punk supergroup, having previously come across many of the members in other bands. A twin vocal attack is provided by Vince Mahon, also the frontman of Morgellons, and Michi Sinn, formerly with 1980s goth punks Junior Manson Slags. Guitarist Richard Sheldrake (Big Boy Tomato) is usually joined on bass by Finn Panton (guitarist with Menace), although today the low-end duties are being most capably handled by a young dep called Robin, whose playing is strikingly impressive. Simon Daniels on keyboards, and Neil Harris on drums complete a line-up with a massive and varied sound. 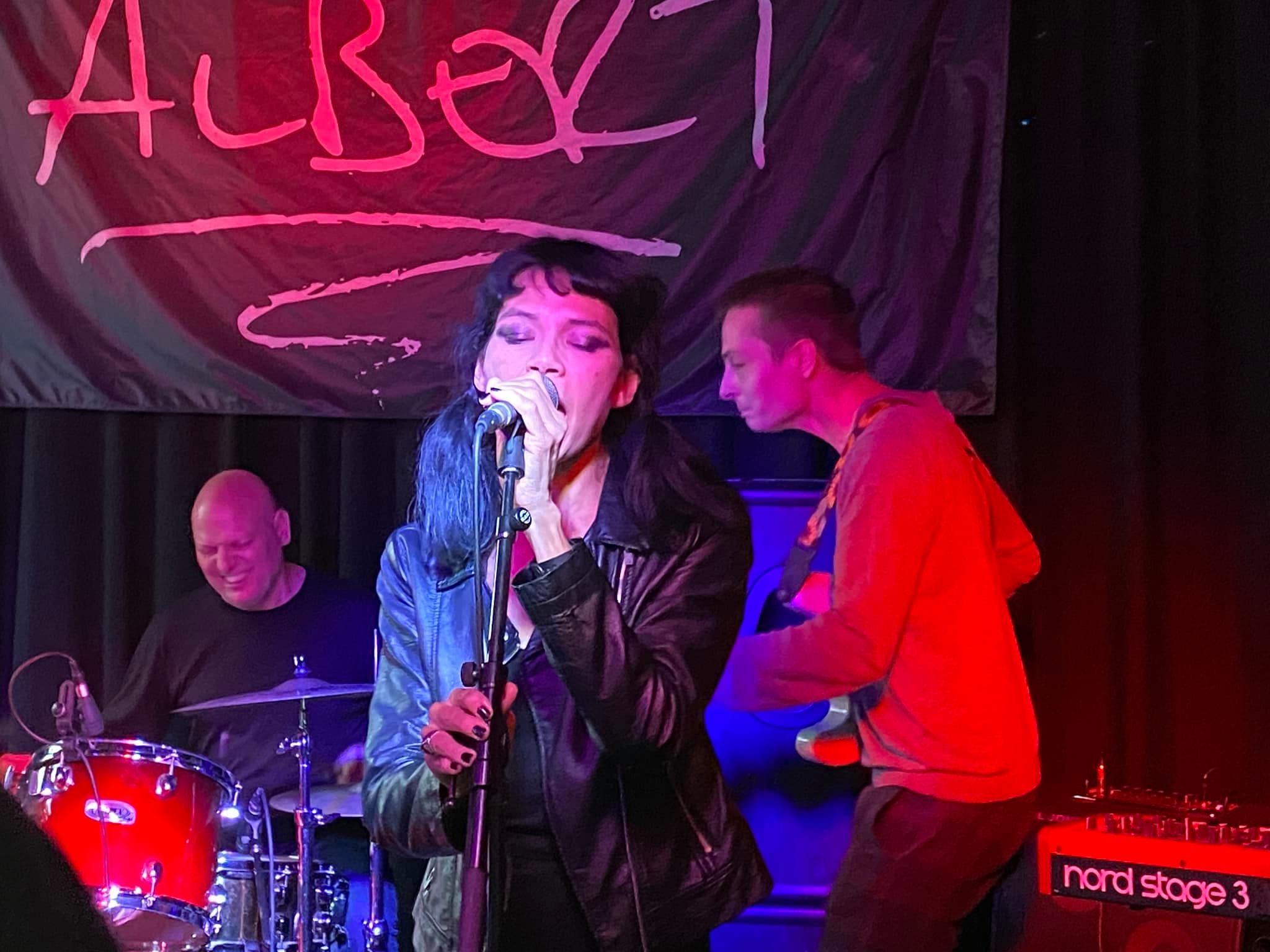 Previous glories notwithstanding, the matter in hand is the superb new album, ‘Lockdown Breakout’. As the title suggests, this was recorded remotely in pandemic isolation, and its release on vinyl and CD has been facilitated by Sounds Of The Suburbs, a record shop in Ruislip, West London, that tirelessly champions the independent scene and has a rapidly growing roster of releases on its own label. The album provides almost the entire set, although with the song order rearranged.

The dual vocals soar, with Vince clutching the mic stand, eyes closed and head thrown back. Michi, by contrast, sings with staring eyes and elegantly slinky accompanying moves. Musically, there’s a bit of everything, from urgent punky riffing, to hints of ska and garage psych, atmospherically brooding soundscapes and a couple of slower reflective pieces. I particularly enjoy the snarling menace of ‘Subterranean Homesick Beast’ (originally by Morgellons) and the 1960s groove of ‘Holy Cow’, which acknowledges its debt to ‘These Boots Are Made For Walking’ with a segue into the original song. We conclude with a most enjoyable cover of ‘Molly’s Lips’, a Vaselines’ number, famously covered by Nirvana. 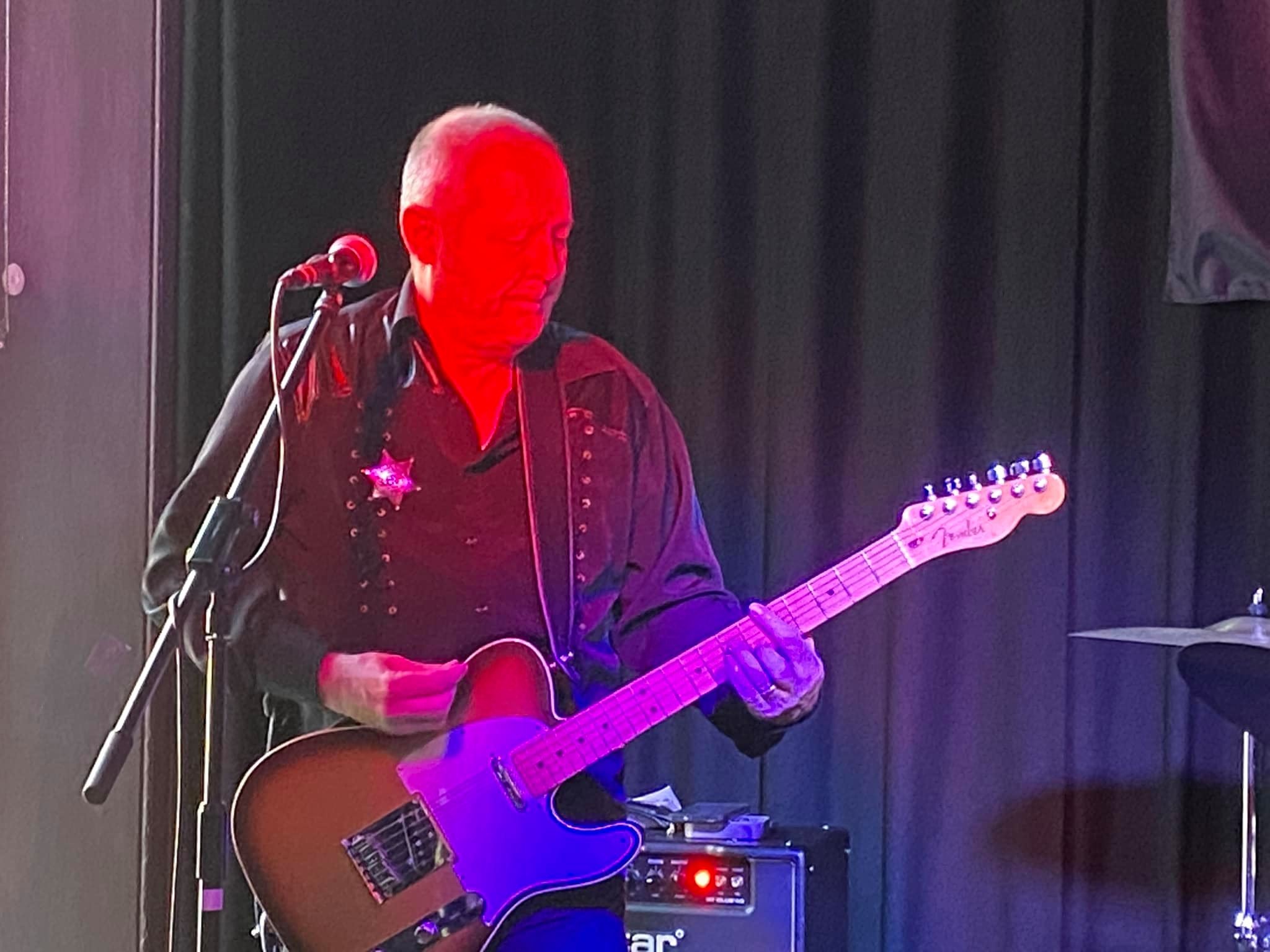 Find them on Bandcamp.

The Sunday lunch idea has proved a roaring success, and I’ve thoroughly savoured the tasty bill of fare in this most convivial setting. Better still, it’s only a few steps to the station, where my carriage awaits. 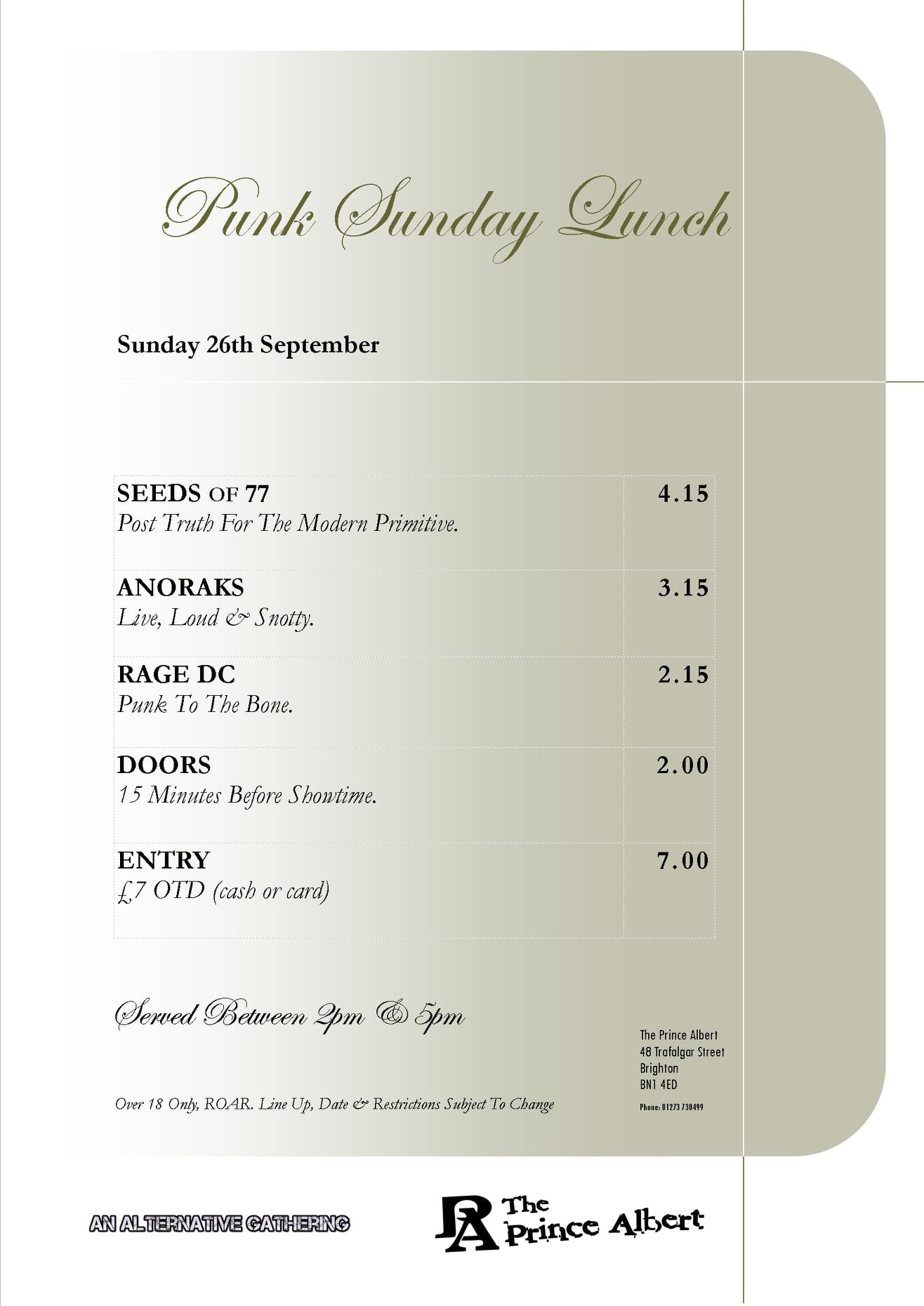