Post-pandemic wages rise in Greater Brighton – but mostly for bosses

Pay is rising across Greater Brighton but the increases are mainly benefiting those in management jobs which are already better paid, according to a new report going before council and business leaders.

The report found that wages reported through the “pay as you earn” (PAYE) scheme exceeded the levels recorded before the coronavirus pandemic.

In most other parts of the country, payroll earnings were lower now than in March last year when the first covid lockdown started to take its toll of the economy.

In the early stages of the pandemic, the report said, 14,000 people lost their jobs. But since then 7,000 people had found new work.

The biggest job losses were in hospitality, the arts and entertainment, manufacturing and construction.

The report was commissioned by the Greater Brighton Economic Board – made up of council, business and education leaders – and is due to go before members next week.

The Greater Brighton area stretches from Brighton to Crawley and Gatwick from Seaford to Bognor.

The report said that the monthly payroll for the region now exceeded £900 million, adding: “There has been a net loss of 7,000 payroll employees (and) salaried employees are earning more on average post-pandemic than they were before the pandemic.

“Survey evidence indicates that the increase in pay has not been shared equally across the pay scale and has disproportionately benefited higher earners.

“This reflects the higher concentration of professional and management roles located across the region.”

An extra 17,000 people are claiming work-related benefits in the Greater Brighton city region, in line with the national average, although the rate is higher in the Crawley area.

Many of those claiming benefits are thought to be self-employed or people on short-term contracts who have been unable to find work.

Almost 900 businesses have gone bust since the start of the pandemic – with a higher rate of liquidations than the national average.

The ICT sector was hardest hit, with several businesses in the online advertising sector going under. 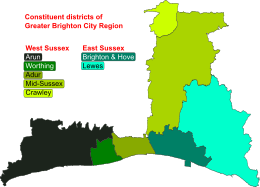 The report, which was prepared by a global consultancy called Hatch, said that the creative, arts and digital sector had been badly hit and would take time to recover.

Businesses in the aviation sector were also hard hit but logistics had experienced “significant growth”.

Retail and high streets were recovering – and tourism and culture had rallied over the summer after the heavy toll taken by the lockdowns and other covid-related restrictions.

Fewer people were commuting, with train and bus use down 50 per cent on pre-pandemic levels, compared with just 20 per cent down on average across the country.

Some of the drop could reflect a switch to commuting by car while high numbers were still also working from home.

The report said that the long-term goal was to make Greater Brighton a prosperous, net zero carbon area, with opportunities to deliver a better standard of living for all.

The short-term goals are

The Greater Brighton Economy Board Meets is due to meet virtually at 10am on Tuesday 19 October.