Rubbish fires in Brighton and Hove since the bin strike started almost two weeks ago have prompted fire chiefs to urge people to be vigilant. 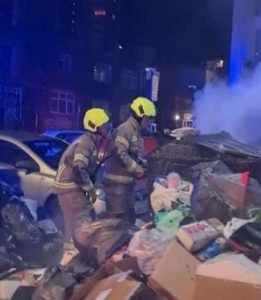 East Sussex Fire and Rescue Service is not understood to have published any details of rubbish fires since the start of the strike by bin lorry drivers.

Residents have told Brighton and Hove News that they want to know when there are fires, especially deliberately started fires, near their homes.

This would spur them to check any security cameras, including car dashcams, for footage that could catch arsonists.

The fire service said: “East Sussex Fire and Rescue Service recognises that there are additional concerns about fire safety in Brighton and Hove at this time.

“We would ask people to remain vigilant and call 999 if they see a fire.

“Precautions which can be taken include

“Arson is a criminal offence that can lead to loss of life and injury for victims and heavy prison sentences for offenders.

“It can damage property and have a negative effect on the environment.

“You can also report suspicious behaviour or information about suspected arson to Sussex Police or anonymously to Crimestoppers on 0800 555111 or via https://crimestoppers-uk.org.”

There has been no communication from the council to suggest either that the GMB union has agreed to suspend the strike or that the bin store risks are being urgently addressed.

It is understood that the GMB union, which represents the striking bin lorry drivers, is willing for bin stores to made safe.