The council that doesn’t want to meet

Of all the damning statistics concerning the performance of Brighton and Hove City Council – for example, having one of the worst recycling rates in England, the third most polluted street and the eighth highest rate for anti-social behaviour – one figure must surely worry its residents more than any other.

The cancellation of another meeting of the full council last week means that by the time the next scheduled meeting comes around, it will have been two years since the city last had a full in-person meeting of its 54 city councillors.

This situation, where a proper meeting of a city council has not been held for two years, is deeply concerning, out of step with the rest of the country and reflects a lack of leadership at Brighton and Hove City Council.

While other local authorities have done their utmost to keep their local democracy going during the pandemic, for example, by hiring bigger venues such as sports halls to ensure meetings meet regulations, Brighton and Hove City Council has gone the opposite way, cancelling its meetings, reducing attendance at those that remain and keeping the press and public at arm’s length distance.

For example, when other councils were meeting during the summer, Brighton and Hove was instead restricting its meetings to just three councillors and locking its doors to the public.

Since then, the situation has worsened, with the council spending much of the autumn writing long papers justifying why it should not meet – and it cancelled the last two meetings altogether.

Driving all this have been the Greens and Labour, who simply do not want to meet and were again the cause of last Thursday’s cancellation.

The Conservative believe that these parties are now out of touch and out of step with Brighton and Hove residents, who have been back at work this year making the city run.

The problem for residents from the council not meeting is twofold. First, the council and councillors set an example and the tempo for the whole of the council operation.

As councillors have not been attending meetings, the doors of Hove Town Hall have also been shut to residents for two years so they haven’t been able to access face-to-face services.

If the council’s remote services were being delivered properly, this would be one thing, but clearly they are not.

This year the parking permit system collapsed, the Housing Department is behind on 7,000 repairs and the allotment letting system has failed. The council also issued incorrect emergency cards to hundreds of the city’s carers.

Residents who call to try to resolve the situation face a phone that often rings out. 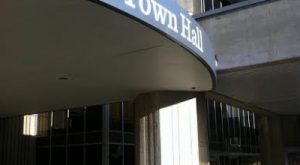 The second aspect of this is that, while council is not meeting, it is not able to discuss the issues that are important to residents and the areas where the council is failing.

The last two cancellations mean that important topics will now not be debated, including agenda items such as

The consequences of not discussing and resolving these issues are in many cases extremely serious to our residents.

The lack of leadership from the Greens and Labour on this issue is costing our city dear.

Residents are no longer buying the excuses from the council that covid is forcing their hand. Two years without a proper council meeting and proper services for residents is too long.

When the next scheduled full council meetings come around, the council’s leadership must make a genuine and positive attempt to hold a meeting for the city and not stretch its record into a third year.