Dozens of children were excluded from Brighton and Hove schools last year for breaking rules aimed at limiting the spread of the coronavirus. 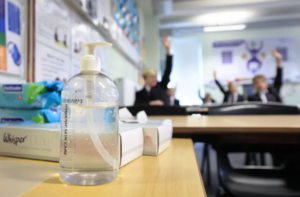 In all, there were 57 exclusions for “wilful and repeated transgression of protective measures” in Brighton and Hove in the 2020-21 school year, according to the Department for Education.

All of the exclusions were temporary – or suspensions – and 35 were from secondary schools while 22 were from primaries.

The total number of exclusions in Brighton and Hove – for all reasons – rose by more than 45 per cent last year, compared with 2019-20.

There were a total of 1,404 exclusions for all reasons, just four of which were permanent exclusions – or expulsions. The figure was up from 964 in 2019-20.

The most recent academic year included a period in spring 2021 when covid-19 restrictions meant that only vulnerable children and key worker’s children were attending school in person, with others educated remotely.

Across England, children were excluded 12,965 times for reasons including non-compliance with social distancing, causing distress such as by purposefully coughing near others or any other deliberate breach of a school’s public health measures.

Schools were permitted to list more than one reason for each exclusion for the first time last year.

Labour said that the government’s lack of clear guidance over pandemic measures had threatened children’s futures and contributed to almost 13,000 exclusions nationally.

Of the 16 possible reasons for exclusion, public health was the eighth most frequent.

The most common reasons were for persistent disruptive behaviour (32 per cent), verbal abuse or threatening behaviour towards an adult (20 per cent) and physical assault against a pupil (14 per cent).

The Department for Education said that permanent exclusions were a rare but necessary way of managing behaviour – but should not mean exclusion from education.