The singer and actor Dame Olivia Newton-John has died at the age of 73, her husband said today (Monday 8 August).

Dame Olivia had a long and varied career in music and film and will probably be most fondly remembered for her role as Sandy in the 1978 film Grease.

But locally, she will also be remembered for her part in the Eurovision Song Contest at the Dome when Brighton played host in 1974.

She represented Britain in the contest that year with the song Long Live Love, finishing fourth as Abba stormed to victory with Waterloo.

Britain awarded the Swedes nil points, prompting accusations of trying to fix the vote to ensure the home entry triumphed.

The British-born singer was reported to have died “peacefully” at her ranch in Southern California this morning, surrounded by family and friends.

In a statement posted to Instagram, her husband John Easterling wrote: “Olivia has been a symbol of triumphs and hope for over 30 years sharing her journey with breast cancer.

“Her healing inspiration and pioneering experience with plant medicine continues with the Olivia Newton-John Foundation Fund, dedicated to researching plant medicine and cancer.”

Mr Easterling asked that, instead of flowers, donations be made to Dame Olivia’s foundation.

She is survived by her husband as well as her daughter Chloe Lattanzi.

In Grease, the singer and actress immortalised the role of Sandy, the goody-goody high school student who joins Rydell High.

She transforms into a super-sexy greaser in her efforts to win the affections of love interest Danny Zuko, played by John Travolta.

The film and its accompanying soundtrack – still much loved more than 40 years later – catapulted Dame Olivia to international fame.

But she had already earned a healthy level of success in Australia, where she was raised, and in Britain. 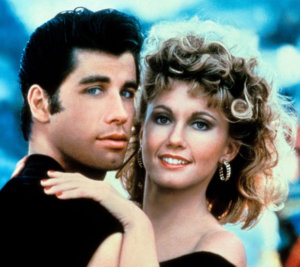 Dame Olivia was born in Cambridge, to a Welsh father, Professor Brin Newton-John, and his German-born wife Irene, who was the daughter of Nobel Prize-winning physicist Max Born.

She was the youngest of three children and moved with her family to Melbourne when she was five.

By her mid-teens, she was already an emerging star, winning a TV talent show as part of a girl group, Sol Four.

Her second single, a cover of Bob Dylan’s If Not For You, released in 1971, reached the top 10 in Britain and Australia.

Four years after her Eurovision entry, she starred in her career-defining role in Grease, in 1978.

Initially, she was apprehensive about the role that would immortalise her, worrying that she was too old to play a high school student – she turned 29 while filming in 1977.

Having insisted on a screen test with her co-star John Travolta, she took the part. And to account for her Australian accent, the writers changed the play’s original American character Sandy Dumbrowski to Sandy Olsson, an Aussie who holidays in America before moving there permanently.

Grease was an immediate success, becoming the biggest box-office hit of 1978, and she sang some of its biggest songs – You’re The One That I Want, Hopelessly Devoted To You and Summer Nights.

The soundtrack topped the charts around the world and remains one of the best-selling albums ever.

After the success of Grease, Dame Olivia returned to her music career, and she continued to perform and release songs until her death.

In 2008, she wed her second husband, the businessman and conservationist John Easterling, and they remained married until her death.

After being given the first of three cancer diagnoses in 1992, Dame Olivia became a prominent breast cancer campaigner.

After her initial battle with the disease, she had a partial mastectomy and reconstruction.

She remained cancer-free until a recurrence in 2013, then in September 2018 Dame Olivia revealed that she had had cancer diagnosed for the third time in three decades.

One the Australian news programme Sunday Night she said that doctors had found a tumour in her lower back in 2017.

The singer said that she was treating the illness “naturally” and was using cannabis oil made from marijuana grown by her husband in California to alleviate the pain.

She also underwent radiation treatment and cut sugar from her diet to try to overcome the cancer. She said: “I believe I will win over it.”

She also said that she hoped Australia would legalise medical marijuana.

In January 2019, amid reports in America of her failing health, she shared a video message with fans revealing “reports of my death have been greatly exaggerated”.