People living and working on the edge of proposed low-traffic neighbourhood in Brighton are calling on councillors to work with them on the pilot project.

Eight people, who live and work in Elm Grove or have children at school there, are raising concerns about the planned Hanover and Tarner Low-Traffic Neighbourhood at a council meeting next week.

They fear the scheme could lead to extra traffic using boundary roads such as Elm Grove, adding to the worrying levels of air pollution at the Lewes Road end.

And they plan to bring a deputation to Brighton and Hove City Council, asking to form a working group to “act as a critical friend and intelligent customer”.

The deputation, led by Michelle Patel, follows a public consultation when people had a chance to give feedback on the latest design for the low-traffic scheme.

The pilot project includes a mix of road closures, “pocket parks”, a new one-way system and a “bus gate” – or bus lane – in Southover Street.

The design was the third to be shared publicly after two previous options were shown at a more informal series of workshops earlier in the year.

The deputation is due to ask about the effect of the project on “boundary roads” such as Elm Grove, with residents concerned about the prospect of increased traffic.

Its concerns are spelt out in the meeting papers for the council’s Environment, Transport and Sustainability Committee which is scheduled to start at 2pm on Tuesday (20 September) at Brighton Town Hall.

In the meeting papers, the deputation said that Elm Grove had a lot of traffic, speeding was a problem and so was pavement parking.

Residents want to “inset” parking bays built as well as action to ban parking on pavements.

They also want a green wall by Elm Grove Primary School to shield pupils from pollution.

At the bottom of Elm Grove, at the Lewes Road traffic lights, they said that air pollution was more than double the World Health Organisation guidelines and at the UK legal limit. 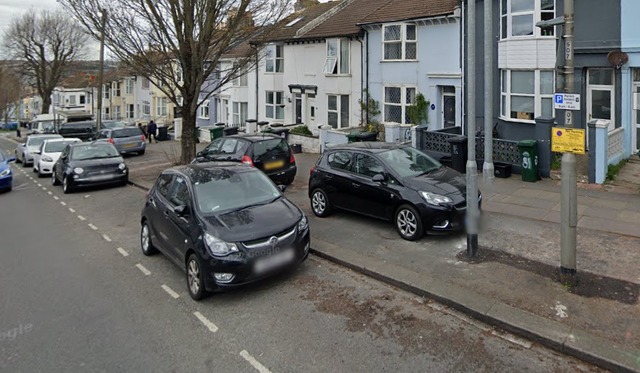 Parking remains a problem in Elm Grove in Brighton

Ms Patel said: “Without a clear design and assessment, we cannot know the impact of the Hanover and Tarner Low-Traffic Neighbourhood pilot on so-called boundary roads like Elm Grove, but similar pilots have seen increased traffic of up to 48 per cent.

“Residents agree with local councillors that improvements to Elm Grove and other residential streets should happen first and be permanent.”

The committee meeting is scheduled to be webcast on the council’s website.