A Hove resident’s plea for the council not to site a cycle hangar outside her home led to councillors voting to remove it from the latest set of installations.

St Leonard’s Road resident Janice Goodlet asked Brighton and Hove City Council why bike hangars were being placed directly outside people’s homes after one was proposed for directly outside her house.

Two hangars for the street in Hove were among 11 considered by the council’s Environment, Transport and Sustainability Committee at Hove Town Hall on Tuesday evening (15 November).

Seven residents asked for the hangars a year ago but, during a recent public consultation on a draft “traffic regulation order” to instal the hangar, six neighbours objected.

Ms Goodlet asked councillors: “How did the council officers take into account the negative and distressing impact a large unattractive structure like the cycle hangar would have on the unfortunate residents living in the house where it is to be located, bearing in mind that the resident will have absolutely no control over this immovable structure?”

Green councillor Steve Davis, who co-chairs the committee, said that sites for the hangars had been chosen based on a number of factors including residents’ demands, drainage, existing street furniture and the slope of the road.

He said that the committee tried to listen people’s views and address serious concerns.

At least one resident had said that they would welcome a hangar outside their home – and he offered to pass on their details.

Most homes in the street had front and back gardens where residents could store their bikes safely, he told the committee.

Councillor Nemeth said: “I would expect bins and other non-beautiful items of street furniture to be located at the ends of roads when they’re not directly outside anybody’s house. In this instance, these locations have been shunned.”

Green councillor Elaine Hills, who co-chairs the committee, said that people had asked for the hangars and failing to instal them went against the “spirit” of the scheme.

Fellow Green councillor Jamie Lloyd said: “You do get pushback. You do get people who think these are going to be a huge imposition on their lives while seemingly ignoring the Range Rovers that are half parked on the pavement.

“What is a cycle hangar compared with a car parked on the pavement? People have requested this. They want somewhere safe to keep a bike.” 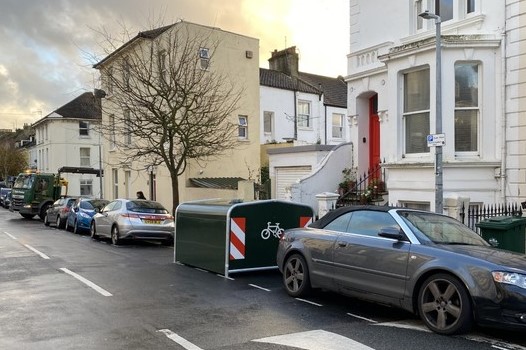 A cycle hangar in Warleigh Road in Brighton

Even without the St Leonard’s hangars, nine more will be installed in five streets across Brighton and Hove – Cissbury Road, Clermont Terrace, Chesham Street, Kingsley Road and Islingword Place.

During the latest consultation, most objections related to hangars placed directly outside houses.

The council removed four other roads from the list of potential sites – Burton Villas and The Drive, in Hove, and Dudley Road and Franklin Street, in Brighton. Officials will seek alternative sites.

So far, 60 cycle hangars have been installed across Brighton and Hove, the committee was told. Of the 360 spaces, 353 are taken and almost 500 people are on the waiting list.

During the November 2021 consultation, more than 2,000 people responded with requests for hangars in 525 streets.

Council officials prioritised areas with a high number of cycle thefts where people lived in flats or houses without cycle storage.