John’s Camping is closing after 50 years.

Owner John Holden will shut up shop at the end of the month 50 years after opening his business in Whitehawk.

He opened a shop in Lewes Road shortly afterwards, and in 1970 went to New England Street, Brighton, from where he traded for 34 years.

Ten years ago he bought premises in London Road and on Saturday 30 August he will close the doors for the final time, having sold the freehold to the three-storey building.

Mr Holden, 77, who runs the business with his daughters Nicky and Jojo, said: “So many people – it must have run into thousands – have come in in the last six weeks and said they can’t believe we’re closing.

“Some of them have literally had tears in their eyes. It’s making us sad too.

“People are saying they used to come in the shop as kids and now they bring their own children here.”

Brighton-born Mr Holden said that he had no particular plans for his retirement plans although he added: “I might do a few jobs I’ve been putting gof like paint a door or mow the lawn.”

The unnamed new owner is believed to want to let the ground floor as a shop with a view to creating flats above. 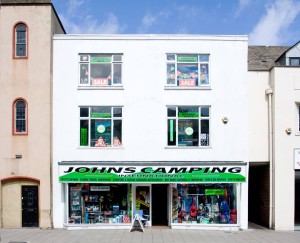