Brighton and Hove Buses has named one of its fleet after the late Primal Scream founder Robert “Throb” Young, who died at his home in Hove earlier this month. 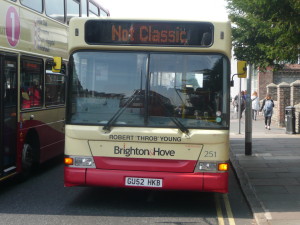 The 251 Dennis Dart was given the name on Tuesday 23 September to mark the guitarist’s funeral, with the words Not Classic in the destination board at the band’s request.

It was used to transport guests from the funeral at St Andrew’s Church, in Church Road, Hove, to the wake held at The View in Western Esplanade in Hove.

Desna Tatler, of Brighton and Hove Buses, said: “We thought it would be really fitting and a great tribute to have a bus named after him and be at the funeral.

“Obviously it’s sad circumstances but it’s good to be able to do something.”

The bus will now be in service until around the end of the year on different routes. The bus company will shortly be launching a campaign to allow members of the public to get involved in naming buses.

The musician, who played with the band until 2006, was found at his home in Hove on Tuesday 9 September. He moved from Glasgow to Brighton with the rest of the band in the 1980s.