A censured Brighton councillor has defended his right to tweet and criticised a council standards panel for reaching “a poor decision for democracy”.

Ben Duncan, who represents Queen’s Park as an independent, was formally censured when a Brighton and Hove City Council Standards Panel met on Monday (6 October).

The panel found that the former Green councillor had breached the council’s code of conduct with the content of two texts from earlier this year.

He said on Twitter: “Blasphemous 7yo wants ‘Islam Book’ to press flowers in (it’s big and heavy). Should I stone her to death when I get home from work?” 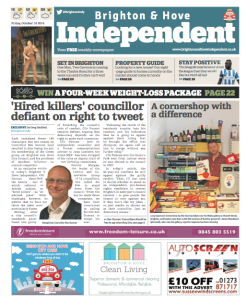 The president of the Brighton District Bangladeshi Shomity, Sunny Choudhury, complained, saying that the comments do more to divide our community than bring people to together.

Less than a fortnight later Councillor Duncan said on Twitter: “Armed Forces Day has certainly bought the hired killers onto the streets of Brighton today. Hard to explain to my son!”

Two days later, on Monday 30 June, he tweeted: “Apols for offence caused by tweet re soldiers on streets. Many will hav been remembering loved ones who died and was insensitive to their loss.”

Within days the council had received 60 complaints about his tweet.

The Brighton and Hove Independent said today (Friday 10 October): “Each contained no more than 140 characters. But two tweets by Councillor Ben Duncan have resulted in him losing his job, his membership of the Green group on Brighton and Hove City Council, and his positions of (modest) influence on council committees.

“In an exclusive article in Brighton and Hove Independent, Councillor Duncan described the tweets as ‘ill-advised jokes’.”

With hindsight, he admitted that he did not think the jokes were particularly funny.

And he remained defiant, arguing that democracy depended on his right to make such comments.

Councillor Duncan – a former communications adviser to the Green MEP Jean Lambert – looks like also being stripped of his role as deputy chairman of the council’s two licensing committees.

Warren Morgan, the leader of the opposition Labour group, has called for him to stand down from the council.

Councillor Morgan said: “From the day he made these comments, we have been consistent in calling for Councillor Ben Duncan to resign his seat.

“Following the result of the standards inquiry into his conduct, and his indication that he is going to appeal against their ruling that he brought his office into disrepute, we again call on him to resign without any further delay.”

Councillor Duncan won his Queen’s Park seat from Labour when he was elected to the council in 2007.

In his article, the 43-year-old confirmed that he will appeal against the guilty verdict. 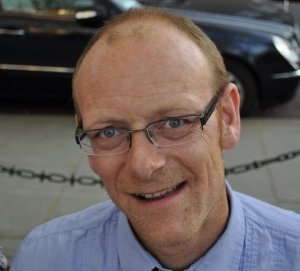 He wrote: “A few months back, I made some ill-advised jokes on a social media website – targeting Muslim fundamentalists and members of the military.

“Some people found them funny; some found them offensive. Most didn’t care either way, of course.

“But some of those who found them offensive lodged official complaints with the council, claiming I had failed to treat them with due respect and even that I’d brought the council into disrepute.

“On Monday, a panel of councillors met to consider the complaints. They decided I had indeed broken the council’s own rules and that I should be punished accordingly.

“I argued that councillors, like anyone else, should be free to say what they like, as long as it doesn’t break the law of the land, and that if people don’t like it, they should vote for someone else instead.

“Indeed, you could take the argument further and say that local democracy works best when voters know what the candidates are actually like – and that all elected councillors should be encouraged to speak their mind in public wherever possible to help.

“Members of the panel didn’t like that argument, saying my human right to free speech was limited by me having signed a code of conduct for members soon after I was elected.

“I think that a poor decision for democracy – not just here in Brighton and Hove, but across the country.

“Why? Because every council, everywhere, has a members’ code of conduct, and if councillors think they might be punished for making a bad joke, or an ill-judged off-the-cuff comment, they simply won’t make any jokes or off-the-cuff comments. And electors will know less about them, as a result.

“That’ll mean come polling day they’ll be forced to choose between candidates solely on the basis of their party allegiance – and not whether they think they’d be a good local councillor, or represent their views, if they are elected.

“I don’t – with hindsight (a wonderful thing!) – think my jokes were particularly funny. But I do think democracy depends on my right to make them, if I so choose. And in voters’ right, ultimately, to vote for someone else at election time if they don’t like them.

“Human rights must apply to everyone, all the time, if they are to have any meaning at all. If they don’t apply to politicians, then our local democracy can’t work properly.

“I think, with their ruling, the members of the ‘standards panel’ have cast something of shadow on both respect for human rights, and democracy, and all in the name of Brighton and Hove City Council. It is they who have brought our council into disrepute.

“I think this is an important argument, so I’ll be appealing so we can thrash out these ideas once and for all.

“Then, I’ll just need to decide whether to stand as an independent, pro-human rights candidate in central Brighton in next year’s council election – to give people the chance to vote against me, if they don’t like my jokes – or, just maybe, to choose me as their councillor. Just as democracy allows.”