Zombies to rise again in Brighton – the day after Halloween

The zombies are back! And they’re after your money. The organisers of the Beach of the Dead zombie walk are holding a fundraising film screening in just under a fortnight.

A late-night screening of Shaun of the Dead is taking place at Duke’s at Komedia, in Gardner Street, Brighton, on Saturday 1 November from 11pm to 3am.

Those going are advised to book tickets in advance by clicking here, phoning 0871 902 5728 or visiting the box office in person. Expect a gory-looking audience.

The organiser Kate Amer said: “This fundraising event is vital to Beach of the Dead’s future.

“This event will allow us to go hard and gruesome on a comeback for Beach of the Dead 2015.

“All funds raised with go directly to the event, allowing me to go to the powers that be with a plan of action for our return for 2015.” 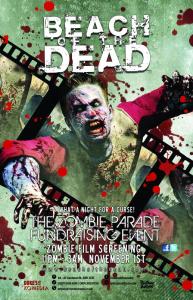 The annual zombie walk through Brighton started seven years ago and quickly grew in popularity.

“Organiser Kate was fed up with the lack of Halloween events around in 2007 and craved a macabre atmosphere.

“With a love of horror and any excuse to cover herself head-to-toe in blood, Beach of the Dead was born.

“Beach of the Dead puts the ‘fun’ in ‘funeral’, the ‘laughter’ in ‘slaughter’ and invites the whole family to get involved.

“Beach of the Dead takes zombie walks to a new level.

“Brighton zombie parade attracts thousands of participants and likeminded onlookers from across the globe.

“In 2012, Beach of the Dead broke the UK Guinness Book of Records largest zombie walk with 6,000 attendees.

due to lack of funding and time pressure.

“The parade is entirely funded by our organiser, therefore the parade was taken back to the butchers block to dissect, manipulate and create a monster which shall return in 2015.

“In the meantime Brighton will not miss out. Beach of the Dead is organising fundraisers and smaller-scale events to help raise funds to bring back the dead.”

Come to our fundraiser screening of SHAUN OF THE DEAD Sat 1 Nov, all proceeds go directly to BotD 2015! http://t.co/ulsQUSEHPl