Work is due to start next week on the £1.3 million restoration of the tower of St Peter’s Church in Brighton.

The church has already spent a similar sum restoring the main building since the new team took over five years ago.

The work on the tower is scheduled to be carried out in three phases and to last about 18 months.

In a press release the church said: “St Peter’s Brighton is about to undergo a transformation.

“Since new leadership took over in 2009 the crumbling building has slowly been brought back to life.

“Now we are about to start work on the tower. 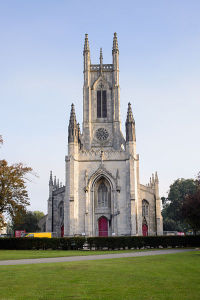 “Over the next few weeks it will be completely surrounded by scaffolding, with work starting from the top down to restore and conserve this grade II* listed building.

“This iconic Brighton building, known unofficially as the city’s cathedral, was designed by Sir Charles Barry who later went on to be architect of the Houses of Parliament.

“It is a significant part of the cityscape.

“With the repair of the main part of the building in 2010, the church became more than an historic building in the community.

“It runs the Alpha Course as well as four services every Sunday, with over 800 people attending.

“It also runs programmes on the Sussex University campus and supports churches in East Brighton and Hastings.”

A blue plaque commemorating Sir Charles Barry was unveiled at the weekend by the mayor of Brighton and Hove Councillor Brian Fitch at St Andrew’s Church in Waterloo Street, Hove.

He also designed the original Royal Sussex County Hospital building – known as the Barry Building – in Eastern Road, Brighton. The 186-year-old building is to be demolished as part of a £400 million modernisation of the hospital.