By Tim Hodges from The Amex

Albion lost their first home under Chris Hughton’s management. The Seagulls were undone by a fortuitous Brentford goal after 29 minutes. Andre Gray’s looping shot taking a deflection off Joe Bennett.

Prior to this Inigo Calderon had a great chance to score , Craig Mackail-Smith played an superb cross field pass but Calderon’s shot was well saved by David Button.

Albion had the higher percentage of possession in the first half. Rohan Ince had a shot from distance which went narrowly over.

With Sam Baldock out wide and Mackail -Smith through the middle the home team were beginning to look part.

As the Albion built an attack Calderon lost the ball on halfway , Alex Pritchard strode forward and Andre Gray was first to Stuart Dallas’ cross and seized the chance to put Brentford in front, with a sizeable deflection from Joe Bennett.

The Seagulls best chance of the first half fell to Solly March , his curling effort from the edge of the penalty area was pushed away by Button.

Before the half concluded March lost the ball on the edge of Brentford’s penalty area from the resulting break Dunk scythed down Pritchard , for which he was cautioned .

Albion pressed Brentford early in the second half , Mackail-Smith working very hard and scampering after every ball.
With an hour gone Dunk appeared to push Romalla Jota , after the pair clashed near the touchline. Referee Andy Davies showed him a second yellow card and the Albion were reduced to ten men.

After good work from Baldock , Mackail-Smith connected well with a volley from around twelve yards out but Button was again equal to it.

Hughton introduced Adrain Colunga for Baldock then a while later Chris O’Grady for March.

The Seagulls looked much more effective with two up front , but despite efforts from Mackail -Smith and Danny Holla, could not get past Button.

Brentford could have finished Albion off before the end as Jon Toral rounded Stockdale , but stood on the ball with the net wide open.

Stockdale then made a superb almost point blank stop from a Diagouraga header.

Mackail Smith lay injured on the track next to the East Stand as O’Grady set up Holla for another chance as Albion had just nine men on the pitch.

But despite Greg Halford ‘s long throw , Gordon Greer playing as a centre forward and Mackail-Smith playing through his obvious pain, the Seagulls couldn’t find a way through .

One last Colunga cross was stabbed goalwards by Bennett but appeared to hit Mackail -Smith, who was standing in the six yard box and bounce to safety .

After the game Albion man of the match Rohan Ince told Brighton & Hove News, he was enjoying his recent prolonged run in the team and preferred it when the Albion played two midfielders in front of the back four.

Six things we learnt from Albion’s home match against Brentford.

2) Brentford’s Alex Pritchard on loan to the Bees from Spurs was dwarfed as he kicked off the match with Toumani Diagouraga who is 6 feet 2 inches. Pritchard is in fact 5 feet 7 inches tall.

3 ) Brentford keeper David Button showed some good ‘techers’ but his keepyuppys and flick over the shoulder late on, were deemed as time wasting and he was booked for his trouble .

4 Rohan Ince was a popular choice for man of the match . Unlike some of his colleagues in recent weeks, Ince stayed around the Bupa Lounge signing autographs and posing for pictures for all those that approached him.

5) Chris Hughton didn’t get the rousing home reception many thought he might . He did however spend most of the game on the edge of his technical area and metaphorically kicked every ball

6) Fans in all stands enthusiastically joined in the minutes applause on 50 minutes for Albion fan and Falmer campaigner Sarah Watts, who died earlier this month . Miss Watts would have celebrated her 50th birthday next week.
. 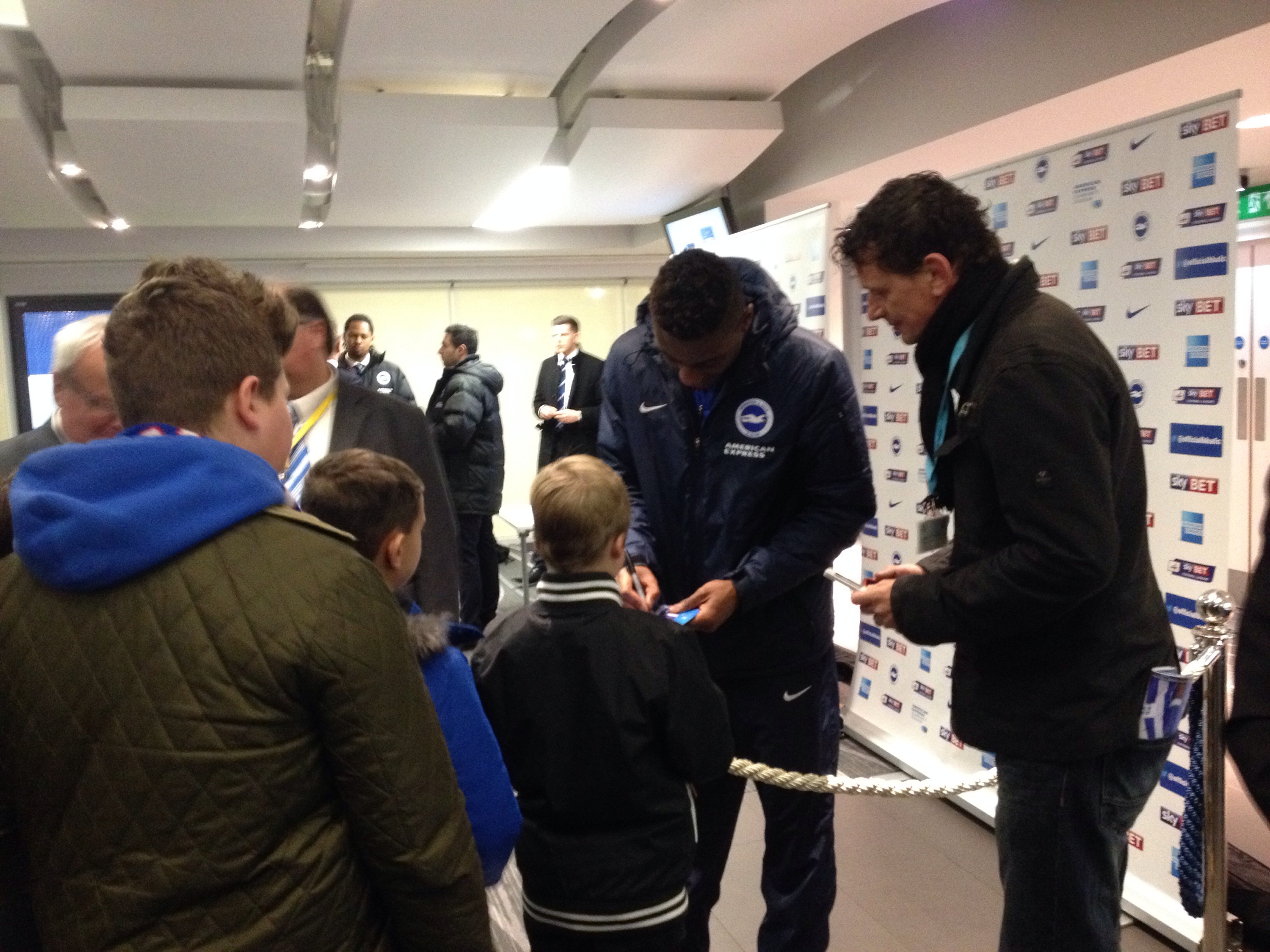