The BBC journalist and news anchor Nicholas Owen was made an honorary Doctor of Letters by Brighton University today (Thursday 12 February).

Mr Owen was presented with his honorary degree for his contribution to journalism and his services to charity. 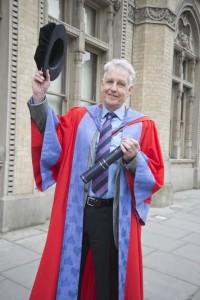 In his acceptance speech at the Brighton Dome, the news presenter congratulated the hundreds graduates who receiving their own degrees.

He had some advice for them, saying: “If you see a door a quarter open, always go through it … there is nothing worse than having regrets.”

He went into journalism straight from school but said: “If I had my life over again, this is where I would come. Brighton is a wonderful university.”

He told how he had beaten cancer and then praised his wife Brenda for having recently recovered from the same disease.

He spoke directly to her in the audience, saying: “Darling, you look fantastic!”

Professor Pole said that Mr Owen was “one of the most respected journalists this country had ever produced” and he praised him for his “tireless” work for charities.