A competition has been launched to design planters for a new “pocket square” outside the Duke of York’s cinema. 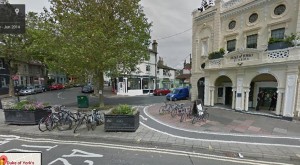 The plantpots which once stood outside the cinema are currently calming traffic as part of a controversial trial in Viaduct Road.

Now, Brighton and Hove Council is inviting artists to come up with ideas for new planters to brighten up the area and mark it out as a public space.

And the winning submission will be funded with £4,000 from developer’s contributions for public art in the London Road area.

The brief says: “As part of ongoing works to create a new Pocket Square outside Duke of York’s Picturehouse, Preston Circus, two metal planters, looked after by the local community, have been removed.

“Whilst residents have identified a desire for street planting and greenery in the London Road area, these planters were utilitarian with a negative visual impact/bulk that reduced any aesthetic benefits provided by the plants they contained.”

It adds: “London Road has recently benefitted from an influx of interest and investment, including the arrival of attractions such as the Emporium, re-occupation of the Co-Op and Blockbusters sites and long awaited redevelopment of the Open Market/Francis St.

“A background project has seen Brighton and Hove City Council work with the local community to identify how a modest investment of transport funds could best enhance the street environment.

“The community identified that the investment should focus on a ‘general tidy up’ of the environment … along with enhancement of the area directly outside Duke of York’s Picturehouse (the pocket square) at Preston Circus.”

The existing cycle lane and rails are being removed, and replaced with a shared space for pedestrians and cyclists.

Cycle parking is being relocated onto Stanley Road and Clyde Road, and and the area in front of the cinema resurfaced – with a chocolate-coloured resin bonded stone aggregate.