Man rescued after collapsing on scaffolding in Hove

A man has been rescued after collapsing on a scaffold in Hove this afternoon (Saturday 4 April).

The man was at the roof level of a three-storey building in Lansdowne Street, in Hove, when he fell ill.

He was brought down in a harness by firefighters from Preston Circus, in Brighton. 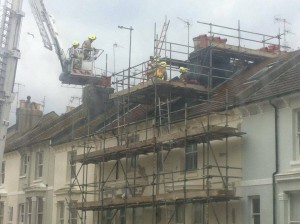 East Sussex Fire and Rescue Service said: “We were called at 2.15pm to reports of a person trapped on the scaffolding.

“We brought him down and handed him over to an ambulance.”

A neighbour, Iain Gardner, said: “He walked to the cherry-picker and then to he walked unaided to the ambulance.”

He was assessed by a South East Coast Ambulance Service crew.

The ambulance service said: “SECAmb was called shortly before 2.30pm today to Lansdowne Street, Hove, to reports a man aged in his 50s had collapsed on some scaffolding.

“Ambulance crews in a car and an ambulance attended the scene.

“The man was reported to have fainted. The fire service used a cherry-picker to bring him down.

“He was assessed at the scene but didn’t require hospital treatment.”