A man died after collapsing in the street in Hove yesterday afternoon. 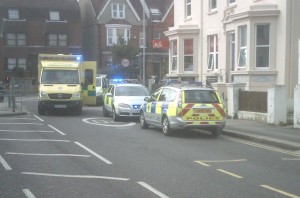 Police and ambulance attend the patient

Paramedics performed CPR on the patient in Sackville Road, at the junction with Blatchington Road.

But sadly, despite their best efforts the man did not make it.

A spokeswoman for South East Coast Ambulance Service said: “We were called at 3.31pm to an adult male who was unwell close to the junction of Sackville Road and Blatchington Road.

“An ambulance and two response cars attended but unfortunately the patient was pronounced as deceased at the scene.”

Concerned passers-by contacted Brighton and Hove News to find out what had happened.

One said: “A poor person died yesterday. The body was covered, and police were attending and holding up a sheet for privacy.”