Could a lick of paint have landed three Brighton people in hospital last night? 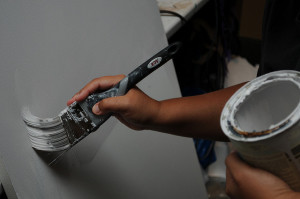 But after a thorough search by SGN (formerly Southern Gas Networks), no gas leak was found.

However, Brighton and Hove News understands that the house had just been painted, which could account for the inhabitants’ symptoms.

Crews from South East Coast Ambulance were called at 7.40pm and checked over patients believed to be suffering from the effects of carbon monoxide poisoning, including sore throats and light headedness.

“A spokesman said: “Three patients were taken to Royal Sussex County Hospital for further checks. I understand other patients were checked over at the scene and given advice should their condition worsen.”

The incident was left in the hands of SGN. Spokeswoman Chloe Boyce said: “”We were called by the emergency services to a property in New England Street, Brighton, last night, at 9.32pm. This followed concerns that two people had fallen ill with carbon monoxide symptoms.

“One of our First Call Operatives attended at 10.02pm. When we arrived, the building had already been evacuated by the emergency services.

“We checked the occupants’ boiler and cooker, and there were no signs of carbon monoxide leaking. We can confirm there was no gas escape at the property.

“As a precaution, we isolated the gas supply at the property for it to be checked by a Gas Safe registered engineer.

“We also checked neighbouring properties and there were no signs of carbon monoxide leaks there.