A group of Brighton students discovered a giant Simpsons mural being painted on their house when they woke up this morning. 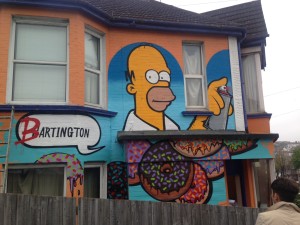 Renowned Brighton graffiti artist Aroe MSK was commissioned by the landlord to paint the striking artwork on the house in Hartington Road as a result of his Viaduct Road piece last month.

Passers-by stopped to watch as the Bartington Road mural took shape from 10am to 8pm tonight.

Brighton University student Samuel Irvine, 22, said: “I came down this morning to have a cigarette and there was a smell like nail polish.

“I was trying to work out wat it was and saw a ladder, then spotted half a Bart Simpson on the wall.

“Aroe told us what was happening and then Pat from Homelets came by and explained what was going on.

“I love it though, I think it’s great. We had the bright orange house on the corner which was visible and it’s even more visible now.” 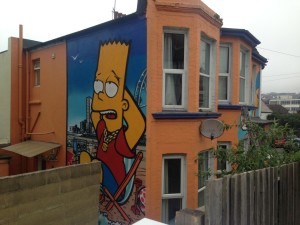 Aroe said: “The landlord of this house is a friend of the Viaduct Road landlord. He wanted to spruce the house up for the students and asked me to paint it for him.”

He remained tight-lipped on why the Simpsons theme had been chosen.

The Viaduct House was painted after the council sent letters to people living in the street asking them to tidy up the outside of their houses.