The cost to tenants of renting privately

Tenants who privately rent are at the mercy of letting agents because agents need the business from landlords and offer them incentives.

The agents are increasingly passing their fees onto young people and other tenants with low incomes who are renting privately.

Matthew Bolton, a private tenant in Hove, said: “In Brighton, it is a seller’s market, they can pick and choose and want reliable tenants.”

He paid a six week deposit in advance for his rental home including a £200 holding fee per person to take the property off the market and £252 for the first person or £384 for two people in administration fees. The fees are not refundable but the deposit is.

Mr Bolton is renting a 1.5 bedroom flat with his partner who is a 32 year old lawyer.  The couple still had to provide a guarantor who was a property owner in spite of their income and age.

A friend of the couple, who has no property owning guarantor, has been told to pay six month’s rent in advance and a two month deposit.

“Some letting agents only offer six month tenancies which means there is no security for young families.  We are sometimes charged more fees to renew the tenancy,” said Mr Bolton. 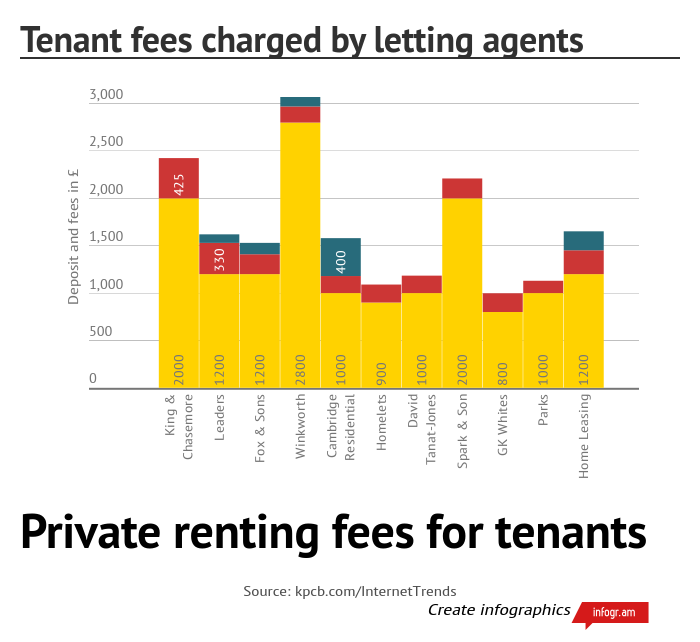 The fees are based on renting an £800 property and can often be found on letting agent websites or by telephoning.

Craig Ritchie from Allied Surveyors and Valuers said: “In 1977 there were rent protection acts but now rents are unchecked.”

The Renter’s Manifesto found: “Private renters are also finding themselves priced out of areas where they want to live and work.  Across much of Britain, particularly London and the South East, many simply cannot afford to pay the rent with the wages they earn.

“This leads to a spiralling benefits bill, going straight into the pockets of landlords.

“The whole economy stumbles and falls if people of all incomes and positions cannot live near where they can work. We know this is a housing crisis, but its consequences could be much wider.”

Private tenants in the UK are paying higher rents than those anywhere else in Europe and spending a greater proportion of their income according to research by the National Housing Federation (NHF) in June this year.

Private renters in the UK spend almost 40% of their income on rent in comparison to the European average of 28%.

The Joseph Rowntree Foundation predicted that more than 50% of private renters will be living in poverty by 2040 in a report published in November last year.

It suggested that private rentals in England are forecast to rise by around 90 per cent in real terms between 2008 and 2040 which is more than twice as fast as incomes.

If the Government does not address the escalating fees and rent, society will become even more divided, a two-tier society of those who own property and those who do not.

The current housing strategy urgently needs to be reviewed to avoid inequality and social unrest.

The Joseph Rowntree Foundation report is called: What will housing look like in 2040?