Ambitious plans for seafront around i360 unveiled

The seafront around the i360 is set to be transformed into an event space to the west and a heritage garden including the old West Pier columns and octagonal kiosk to the east under ambitious council plans published today. 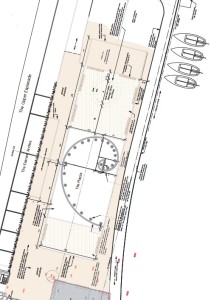 Interest from the i360’s loan paid to Brighton and Hove City council would be used to pay half the £2m costs of the works and finance borrowing the other half, which if approved would start in February and open as soon after the July opening of the viewing tower as possible.

But a report due to be considered by Brighton and Hove City Council’s policy and resources committee next Wednesday warns that if no work is done, it could negatively impact on the business plan of the i360, which the council needs to succeed if its £36m loan, made via the Public Works Loan Board (PWLB) is to be repaid.

However, council leader Warren Morgan said today he hoped i360 money could be used for other seafront investment, such as work on the Madeira Terraces, in future years.

The report says: “With the completion of i360 the two pieces of land on either side of the attraction (in council ownership) will be the last remaining areas of seafront not to have been improved as part of the wider seafront investment programme.

“To support completion of the i360, it is therefore proposed that these two sections of seafront (previously the old paddling pool, to the east and the boating lake, to the west) will be redesigned and re-landscaped to offer two brand new areas of public realm that will be of the same high design quality as the i360 and the rest of the seafront, and will also complement the new attraction.

“These two newly created areas will also provide a much needed forecourt space for the important new seafront businesses to either side created within the newly restored arches and provide valuable and much sought after new event space on the western area.”

The area to the west would be excavated and relaid with a flat paved “flexible event space” open all year round. Discussions are underway between the council and the Brighton i360 team to establish whether a programme of events can be led by i360 or whether this will remain led by the council team. 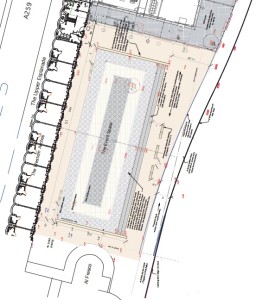 Meanwhile, the area to the east will become a heritage area: “designed to reflect the history of the West Pier site, but reinvented to provide a setting for the West Pier columns and seating.

“It has also been designed to preserve a location for future re-installation of the West Pier Octagonal Kiosk, rescued by the West Pier Trust and stored until a suitable funding solution can be found.

“This area will also be suitable for some smaller events, but is intended to provide circulation space and seating areas for people visiting the seafront and coming to view or visit the i360 and the new businesses within the arches.”

There would also be a new lift from the promenade to the landscaped area below.

Committee chair and council leader Warren Morgan said:  “The i360 is now being built and has to succeed so that taxpayers get a return on their investment, namely the loan from the PWLB approved under the previous administration which is paying for the project.

“I want income that the i360 should generate to be invested back into our seafront infrastructure, including projects like the regeneration of the Madeira Terraces.

“The council no longer has money in the bank to pay for infrastructure projects now, so public/private partnerships, lottery grants and loans are the only way to bring significant investment in to our city and our seafront.”

However, the plans were not welcomed east of the Palace Pier, where traders have been calling for investment, saying they are neglected in comparison to the west side.

Secretary of the Madeira Drive Traders Association Neil Sykes said: “I’m initially shocked.  However if Mr Morgan is serious in his comment, of also using interest accrued via the loan, to assist in the re generation of Madeira Drive, then I personally view it as a plus.

“We all need to be working together here on all things Brighton seafront, what has not been made clear, is when will monies be set aside for Madeira Drive?”

The i360 tower is itself being largely funded by a PWLB loan of £36m. The local authority is due to earn around a million pounds a year from a share of ticket sales, interest from lending money to the developers and from business rates.

PWLB funds are only available for projects linked to profit-making ventures which can repay the loan. The council currently has over £100m of loans out from the PWLB.

If approved, this new project will be the latest in a multi-million pound series of projects to improve the city’s seafront infrastructure including the £46m i360 itself, a £5m project underway to restore 60 historic fishermen’s arches, plus £9m for rebuilding the adjoining circular Shelter Hall.

In the pipeline are the £540m Waterfront scheme to redevelop the Brighton Centre site with a new arena at Black Rock and creating a new £40m leisure centre and housing at Hove’s King Alfred site.