Can you help find Hove rapist?

Detectives have released an efit of the man suspected of raping a 15-year-old girl in Hove as she walked home from a night out.

Anyone who thinks they recognise the man is asked to contact Sussex Police.

He struck at about 4am on Sunday 27 September as the girl was walking along the north side of New Church Road, Hove.

He grabbed her from behind and forced her into St Phillip’s Mews, an alley between Hogarth Road and Richardson Road, where he attacked her next to the Bon Accord nursing home. 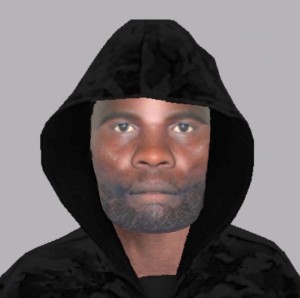 Sussex Police said: “She made her way home and police were informed. The girl has received specialist medical and welfare support and detectives have interviewed her.

“The man is described as dark skinned and of African appearance, in his thirties, about 5ft 8in, of medium build. He was wearing a black hoody with black drawstrings which had white plastic tips.”

Detective Inspector Jon Fanner, of the Surrey and Sussex Major Crime Team, said: “The victim had been walking home from Churchill Square in Brighton, via Western Road, and noticed a man following her as she passed Tesco in Church Road, Hove.

“If you were along that route and saw this man, or if you think you know who he is, please contact us.”

Anyone with information is asked to phone Sussex Police on 101, email 101@sussex.pnn.police.uk or call the independent charity Crimestoppers on 0800 555111.

Detective Inspector Fanner added: “This is an isolated but serious incident and we would be grateful for information from the public to help our investigation.”