A utility company which spent weeks doing gasworks in Carden Avenue, leaving grass verges ripped up and pavements damaged, is now facing a fine for overrunning its permit. 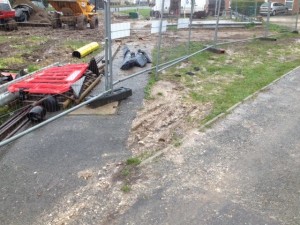 Brighton and Hove City Council is charging Southern Gas Networks for occupying the road two days longer than they planned, as the site had not been cleared on Tuesday this week and their permit ran out last Friday.

The contractor has said it will make good the damage it has caused, and ward councillors have vowed to make sure they don’t take as long to fix the problems as they did laying the pipes.

Cllr Lee Wares said: “Works on our roads and pavement are, in most cases, essential to maintain services, carry out repairs, ensure public safety or enhance an area.

“These are the sort of works that we need carried out, and expect for them to happen but, it is rare they do not cause disruption or inconvenience. In many instances we see little tangible evidence of improvement and might wonder what it was all about.

“Works in Carden Avenue to the gas mains might fit into that category especially when it took so long. Although, we will all benefit from the massive investment to replace our gas mains to continue the safe supply for many years to come.”

“But, we expect the council to have oversight and ensure the disruption is as minimal as possible and completed on time. I’m pleased that the council took a sensible approach to issuing a fine when the permit date was not met in Carden Avenue.

“I acknowledge it is a purely punitive measure but sometimes that is necessary to make sure contractors are focused on delivering their projects.

“There has to be a flexible approach by the council to prevent rushed and shoddy workmanship to avoid a fine but, when that flexibility has no further elasticity, as with Carden Avenue, issuing fines is proportionate and reasonable.

“Although residents won’t directly feel the benefit of the fine being issued, notwithstanding the work being complete and their lives returning back to some normality, I suspect they may feel at least some justice has been done. We will of course continue to monitor the situation to ensure that the area is fully reinstated before being satisfied.”

A council spokeswoman said: “”Southern Gas Networks’ permit for work in Carden Avenue ended on Friday (November 6) and as the site had not been cleared on Monday and Tuesday of this week we will be sending them a charge for occupying the road longer for two days longer than planned.

“Charges for over-running  street works are not new – they have been issued by the council since at least 2007. They are among a range of measures used by the council to keep the city moving, including a roadworks permit scheme introduced earlier this year to reduce disruption.”