A review into the safety of solar panels on all council-owned property in Brighton and Hove in the wake of the Hove Town Hall fire has declared them safe. 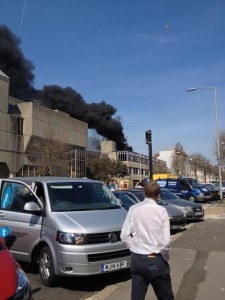 The roof of the council offices in Norton Road spectacularly caught ablaze in April this year, sending a huge black plume of smoke into the sky which could be seen for miles around the city.

At the time, the fire was thought to be started by an electrical fault in one of the panels, and the council announced it would be carrying out a full review of solar panels on council buildings, including schools.

The official cause of the fire has still not been found, but the review has now concluded and given all other panels a clean bill of health.

A council spokesman said: “The investigation into the cause of the Hove Town Hall fire is still in the hands of our insurers and we cannot comment further at this stage.

“After the fire, we carried out a full inspection including thermal imaging on all solar photo-voltaic installations on council premises including schools, as recommended by the Department of Energy & Climate Change.

“All installations were confirmed as safe.”