Council tax in Brighton and Hove is to rise by almost 4 per cent from April after the council voted through its £900 million budget this evening (Thursday 25 February).

Members of Brighton and Hove City Council agreed a 1.99 per cent general rise in council tax and an extra 2 per cent rise specifically for adult social care.

The council tax bill for a band D property will go up to £1,627.66 a year including the police and fire precepts.

It will be slightly higher in Rottingdean, Hanover Crescent, Marine Square and Royal Crescent.

Initially the council failed to set a council tax at its annual budget council for the third year in a row in a six-and-a-half-hour meeting at the County Ground – home of Sussex cricket. The meeting was interrupted early on by dozens of protesters singing in the public gallery. 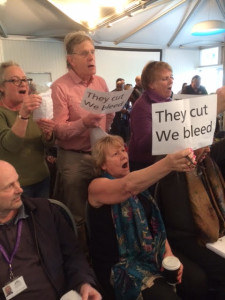 The Conservatives and Greens voted down Labour’s first budget since it won the council elections last May but fell short of an overall majority.

A backroom deal was then agreed over half a dozen Conservative amendments. They will mean

The party said that their measures would be largely paid for through additional savings in senior management costs and through reductions in the 10 full-time trade union officials employed by the council. This was, they said, one of the highest numbers in the country.

“This means that we have succeeded with saving funding for mental health support, vital respite care for parents of disabled children, housing support to protect against homelessness, public toilets, verge cutting and noise patrol services.

“The Conservatives also succeeded in retaining funds for the Community Grants Programme, a vital resource for those who need it most.”

Earlier Councillor Morgan said: “We will continue to support the arts, tourism and creative digital industries so vital to our economy and draw in new businesses like John Lewis so we become ever more resilient, attractive and prosperous on a local, regional and international stage.

“We will continue to attract and invest hundreds of millions in our city’s infrastructure over the next four years – a new arena at Black Rock, a new shopping centre next to the Grand, a new leisure centre at the King Alfred, new homes, facilities and business space at Circus Street and Preston Barracks, new seafront infrastructure at West Street, investment in our heritage at the Madeira Terraces and Royal Pavilion estate.

“We will cut our own cloth as a council to fit our budget. Almost £2 million in savings from management costs. Tens of thousands less on councillor allowances this year compared to last. An independent review of the number of councillors to be elected in 2019.”

Officials had pencilled Tuesday 1 March in their diaries in case it took a second meeting to set the budget and council tax – as it did last year and the year before. In the end the spirit of compromise prevailed and the budget passed in one sitting.