Madeira Terraces recording studio relocated – from one toilet to another!

A recording studio which had to leave its Madeira Terraces home at short notice due to structural concerns is hoping to reopen soon – in another former toilet block. 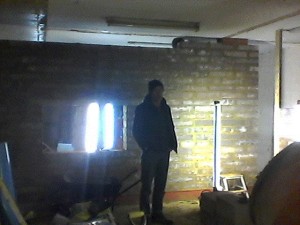 Austen Grayton ran Studio 284 in a former public toilet block under the terraces until September last year, when the city council told him he had to leave in just two weeks after major structural faults were found in the crumbling cast iron keeping the structure up.

But after a break of more than six months, he is hoping to reopen in May after the council gave him the use of another former toilet block further along the seafront in the subway at Black Rock.

As befits a true punk, Mr Grayton seems happy with his new home – although ironically one of the last things holding back the opening day is the lack of a working toilet.

He said: “The council found me this new place which they just offered up as a storage place – it doesn’t even have water yet, it’s just an empty space.

“Everything is starting from scratch – we are building the studio within it, and things are moving along. Just this morning I spoke to BT to see about getting a phoneline in.

“It’s not been used as a toilet since the early 80s, or maybe even the late 70s, so there’s no toilet smell.

“I have been out of work for about six months. I have had to be in the background helping things move along. The council is helping with the relocation costs though.

“Punk bands just want a space to play – I will probably open for them just so I have got some income but not open to the public until it’s completely finished.”

Jag Gallery was also forced to move out of its Madeira Terraces unit at the same time as Studio 284, but when Brighton and Hove News called its phone number yesterday, it was told that the gallery “had died”.

You can keep track of the progress of the studio and rehearsal spaces, which have now been renamed Black Rock Subway Studios, on their Facebook page.