On Friday 18 March a group of brave souls spent one night sleeping out in Brighton as part of YMCA DownsLink Group’s Sleep Easy fundraising event. 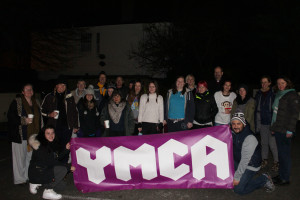 The charity held three sleepouts on the same night in Brighton and Hove, Horsham and Guildford, with a total of sixty people sleeping out across all three locations.

So far, the sleepers have raised over £13,000 for YMCA DLG’s work with homeless and disadvantaged young people – you can make your own donation here.

The YMCA were the first to point out that forsaking creature comforts for just one night is hardly a true taste of homelessness – it was cold and uncomfortable but refreshments and facilities were laid on, and the volunteer ‘rough sleepers’ were in a safe environment.

But, the YMCA said, as the sleepers settled down in their cardboard boxes and the temperature started to drop the realisation that so many people do this night after night was really eye opening.

After the event one of the participants said: “I can’t imagine how it must feel not to know where you will be sleeping every night. I think these people are very brave and need to be given a chance to get back on their feet”.

Brighton event had a special guest appearance when the Bishop of Lewes Richard Jackson stopped by at the beginning of the evening to officially open the event with a prayer.

The money raised from the Brighton Sleep Easy will go to YMCA DownsLink Group’s YAC (Youth Advice Centre) Project that operates housing and general advice drop-ins for young people. YAC supports young people who are in difficult housing situations and helps those who are homeless get off the streets.