Armed with black bags and litter pickers, more than 50 people joined the Surfers Against Sewage Brighton Beach Clean on Sunday. 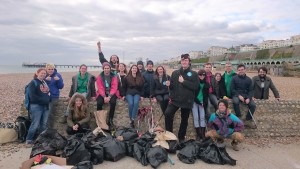 Families and students joined a University of Sussex crew to clean up the shingle from the Concorde 2 to the naturist beach.

Oliver Carr, a co-organiser from Queen’s Park Road, said: “The situation with marine litter is getting worse. Eight million pieces of plastic are entering the ocean every single day.

“The marine ecosystem belongs to the fish not us, it’s not where plastic belongs as it’ll come back to haunt us by seeping back into our food chain.”

Children were encouraged to join the messy mission with organisers burying eight Easter eggs among the pebbles. The grownups did not miss out as the 50 volunteers received vouchers for a free hot drink and sandwich from the Yellowave Beach Sports Café.

Mr Carr’s fellow organiser, Annie Hartnett, said she was keen to get the Brighton and Hove community involved with students, bringing everyone together and raising awareness of how much litter is discarded on the beach.

“This is one of the beaches that tourists don’t generally visit, it’s not cleaned as regularly as the central beaches and needs more care and attention.” 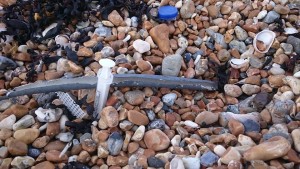 According to Surfers Against Sewage there will be more plastic than plankton in our seas and oceans within 35 years, if action to stop marine littering isn’t stepped up.

Miss Hartnett said: “Even if you don’t really care about marine life, a lot of people eat fish and the stuff that fish eat is effectively going into us.

“We could do a clean up every weekend if enough people were involved, and if the word spread then maybe that’s something we could look at doing.”

Brighton and Hove City Council donated a sharps disposal box and refuse collection kit, the university assisted with refreshment funding and Surfers Against Sewage provided marketing support. More than 40 full bags of rubbish were collected during the afternoon event.