Police and crime commissioner sworn in for four-year term

Police and Crime Commissioner Katy Bourne was sworn in yesterday (Thursday 12 May) after being re-elected last week.

On the first official day of her four-year term Mrs Bourne promised to “act with integrity and diligence … to ensure that the police are able to cut crime and protect the public”.

She also promised to “give a voice to the public, especially victims of crime”, take transparent decisions and “not interfere with the operational independence of police officers”.

Her oath was witnesses by the high sheriffs of East Sussex and West Sussex. 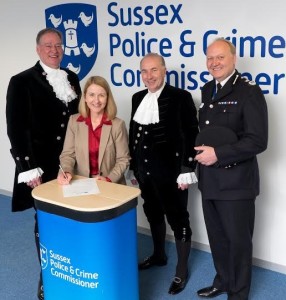 Mrs Bourne said that she had three priorities – neighbourhood policing, protecting the vulnerable from abuse and improving access to justice for the public.

She said that she would like to see any savings invested in frontline policing including neighbourhood police work.

Mrs Bourne was elected on an increased turnout of 23 per cent, up from almost 16 per cent in 2012.

She said: “My promise is that where we can find savings within reduced budgets we will invest those into neighbourhood policing because that is what the public in Sussex have said is important to them.

“Sussex Police has made great strides in tackling domestic abuse, child abuse and child sexual exploitation but, going forward, Sussex residents have also said they want us to look at elder abuse.

“We have an increasing older population, particularly in our coastal and rural areas, and abuse of our elderly is something that I will be looking to Sussex Police to have a particular focus upon.”

She pointed to financial coercion and abuse, scams of theft and fraud as well as cybercrime.

“I also want to improve access to justice for members of the public,” Mrs Bourne said.

“Police officers can now give evidence into magistrates’ courts direct from police stations which saves huge amounts of officer time.

“But I also want to improve access to justice for the public as well. This will enable members of the public to give evidence from public buildings in the future without the need to travel long distances to sit around in court all day.

“This is really opening up the justice system to members of the public and making it fairer for all.”

Chief Constable Giles York said that the force’s financial position was better than it looked like being just a year ago.

There were still challenges, he said, as he spoke about the need to be able to respond effectively to protect the public.

“I want to be able to invest to make sure we would have the best possible response if that should happen here and to do everything we can to prevent anything like that happening in the first place.”

Mr York echoed Mrs Bourne’s determination to protect the vulnerable and highlighted the challenges of policing in an increasingly digital age.

He praised the quality of his officers overall, pointing to “the awful tragedy” at the Shoreham air show last year.

“Members of the emergency services ran forward when others wanted to head in the other direction,” Mr York said.

The High Sheriff of East Sussex Michael Foster, a former county councillor and police authority member who became an MP and government minister, said: “The first priority must be maintaining engagement with the public. The police alone cannot keep us safe.”

DThe High Sheriff of West Sussex Mark Spofforth said: “I stand here before you one of the least well informed people in the room on the detail of policing in Sussex.

“The high sheriff no longer has a role in policing so I am only an observer, a citizen of West Sussex, but one who is nevertheless an interested citizen and one that has been given more access to our judiciary and policing systems than most.

“And I will first observe that the regulatory bodies that the chief constable seems to have to deal with are many and varied. I don’t envy you.

“I can then only bring to bear my personal experience of regulation and what constitutes good regulation.

“The PCC role is a relatively new one and one that has suffered some growing pains, I think.

“And despite the increase in the vote this time around, the interest from the electorate remains frustratingly low and coloured by political allegiances.

“I really wonder whether the objectives of the PCC – to be the voice of the people – are best achieved by affiliating candidates to political parties but this is the way the system is organised.

“Indeed regulation itself is a relatively young profession and is still feeling its way between a paper trail, box-ticking, systemised approach and one of informed and experienced professional judgment.

“To what extent do we, the public, require regulators to be independent of the regulated in preference to being experienced professionals?

“In Sussex we seem to have managed to combine those attributes in our team here, hopefully to good effect.

“Good regulation requires clear objectives in the public interest and it needs to be proportionate. Does the benefit outweigh the cost?

“It needs to be evidence based, co-operative and transparent. It needs to be appropriately resourced, consistent and coherent. And it needs to be reviewed regularly to ensure that the regulation itself remains focused and effective and doesn’t succumb to mission creep.

“It needs to be open and to predict issues and to encourage contributions from every level of staff including, where necessary, encouraging whistleblowing.

“So as well as the PCC holding the force to account and making sure we get the service we deserve, it is important to me as a citizen that the system reinforces confidence.

“It is a virtuous circle that, frankly, is both precious and fragile.

“There is a difficult line for the commissioner to tread between supporting her force and yet remaining both objective and a critical friend.

“And we all know that these are difficult times for our serving officers. Challenges from budget restrictions, changes in contractual arrangements, new demands in cybercrime, the impact of social media, media criticism – both justified and unjustified – all these changes have the capacity to create a lack of confidence and wellbeing in the workforce.

“We have to work hard to overcome that impact on morale. At one end of the risk spectrum, that leads to experienced officers becoming demotivated and leaving the force early.

“At the other extreme ill-judged responses to those changes have the capacity to put officers’ lives in danger. We have to get it right.

“And just a final word. At the moment some commentators are quick to label our institutions as being ‘in crisis’.

“But, you know, my travels around the world talking to governments and professionals have shown me that the vast majority of those countries are extremely jealous of the way we do things.

“So while I would say that we have dramas, I don’t believe policing here is in crisis.

“The best of luck to you, Katy, for the next four years in maintaining standards under pressure and delivering the operational plan here in Sussex.”