A Brighton dad has told of the terrifying moment a stolen car ploughed into the wall of their front room moments after he and his wife had sat down to watch a film. 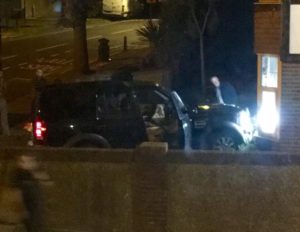 The stolen SUV moments after the crash. Picture by Jo Drage

Dylan Nyoukis and his wife Karen Constance had just put on Scarlett Johansson thriller Under the Skin when the SUV, which was being pursued by police, knocked down their garden wall and smashed into the house.

Dylan and Karen immediately rushed their 10-year-old daughter Elkka out of her room and the family sheltered at the back of the house in case the car caught fire.

The two occupants of the car fled and within moments the emergency services were on the scene. 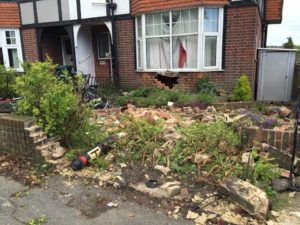 The damage the following day. Picture by Jo Drage

Mr Nyoukis, 42, said: “I was just sitting in the living room watching a movie and I heard the screech of these wheels and saw the lights as the car crashed into the house.

“It went through a bollard and the garden wall and thankfully stopped it coming straight into the living room.

“Our neighbours have told us that the two occupants legged it. We just moved into the back of the house in case it went up in flames.

“My daughter was woken up by the crash, and was a bit shocked and pretty shaken up. But the next day, she was enjoying explaining to passers by what had happened.

“The landlord got the hole boarded up on Monday and we are getting a new sash window by this weekend.” 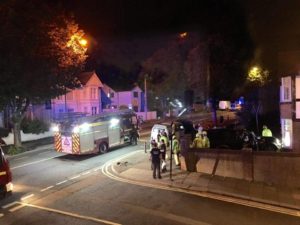 Emergency services on the scene. Picture by Jo Drage

A police spokesman said: “Police were called to a report of a Land Rover Discovery having been stolen from Freshfield Place, Brighton, at midnight on Monday (13 June).

“Officers started a search of the area and the vehicle was spotted in Ditchling Road. A police vehicle followed at a distance and then the Land Rover went through a red traffic light and accelerated away.

“The police unit put their blue lights on, the car then turned right, lost control and crash through a bollard, a gate and into the wall of a house in Ditchling Road.

“The driver and passenger abandoned it and ran off. The occupants of the house were unharmed.

“Police began searching for the suspects but no one was found. A witness described one of the suspects as a white man, 5′ 6”, with blonde crew cut hair, aged about 20 and wearing a dark sweatshirt and dark trousers.

“If anyone knows who the suspects are or has any information, contact police by emailing 101@sussex.pnn.police.uk or ring 101 quoting serial 0005 of 13/06.