Unexploded bombs to be blown up off Brighton seafront

Two unexploded World War II bombs will be blown up off the Brighton coast this summer after being uncovered during construction work on the Rampion wind farm. 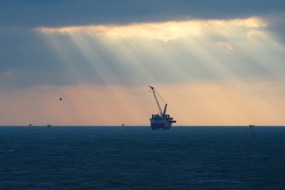 Work started again this week after halting briefly following the discovery of the ordnances and for the black bream spawning season.

Rampion now has permission from the Marine Management Organisation to detonate the bombs, found 3km offshore. Commercial and recreational sea users will be informed of the explosion in advance, and a 1km safety exclusion zone will be in place.

“We are now pleased to be entering the next stage of piling and we’ll now work towards installing the remainder of the foundations by the end of this year, in preparation for turbine installation to begin in 2017.” 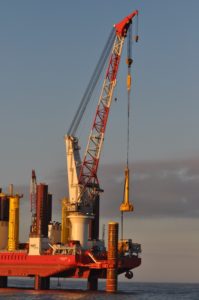 Twenty monopile foundations, each weighing between 500 and 800 tonnes depending on water depth, have already been installed and over the next four to five months two jack up barges – the MPI Discovery and Pacific Orca – will be deployed to install the remaining 96 foundations, by using a 1,000 tonne crane to lift each foundation upright before being lowered and piled into the sea bed.

Onshore the 17-mile underground cable route, which transports the power from the point the cables come ashore at Brooklands Pleasure Park to the planned substation at Twineham, is developing well with around 60 per cent of the ducting installation now complete.

Horizontal directional drilling, a trenchless method of installing underground ducting and cabling has taken place under the railway just north of Brooklands, the River Adur and A283 and the A27, to minimise the impact on the environment and to avoid disruption to local roads.

Similar work is now planned on the final drill site, to cross the beach and the A259 to keep traffic moving along the coast road.

Throughout the development process the Rampion project has consulted with the local community and continues to provide information on construction activities.

The 116 turbine farm project built eight miles off the Sussex coast is due to be completed in 2018.