Hundreds of Labour members are preparing to go into battle for the party’s soul in Brighton this afternoon (Saturday 9 July).

The battleground is the annual general meeting (AGM) of the Brighton, Hove and District Labour Party which is taking place at City College, in Pelham Street, from 4pm.

The outcome will shape the future direction of the party locally and may lead to serving councillors being deselected before the next local elections in 2019.

The elections today take place against a backdrop of unrest nationally as Jeremy Corbyn faces moves to unseat him from the party leadership by more than 170 MPs.

The publication of the Chilcot report also revived memories of the divisions in the party before, during and after the 2003 Iraq war.

The contest locally is focused on the differences between the faction supporting Mr Corbyn – Momentum – and the rival Progress faction, which is more Blairite.

Before the AGM, hundreds of supporters of Mr Corbyn held a “Keep Corbyn” rally at the Brighthelm Centre, in North Road, and a march down to City College.

The organisers said that the rally was being held “to defend the democratically elected leader of the Labour Party”.

And eight days ago the Labour council leader Warren Morgan emailed colleagues asking for their support at the AGM.

He wrote: “Our city Labour party faces a takeover by a group of individuals from Momentum, TUSC, the Alliance for Workers Liberty and other left-wing groups, including people who have repeatedly run against Labour candidates.

“At the last city party meeting they elected conference delegates from their grouping, so have the numbers to win.

“They have made clear that they will be very hostile to me and other Labour councillors elected by thousands of local residents last May, with some talking of deselections.

“We are already outvoted by the Greens and the Tories in the (council) chamber and criticised by others in the press, so having the local party as a ‘critical friend’ rather than an outright opponent undermining our work is essential.” 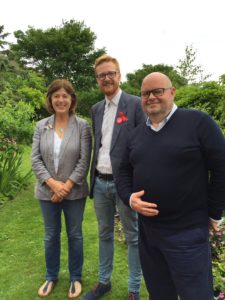 Councillor Morgan asked colleagues not to jeopardise the party’s position in the forthcoming East Brighton by-election on Thursday 4 August.

Labour won 23 seats on Brighton and Hove City Council at the local elections in May last year, compared to the Conservatives’ 20 and the Greens’ 11.

The party is expected to hold East Brighton, one of the safest seats in the area. But the Conservatives have represented the ward in the past, before boundary changes and the turning of the political tide.

The current local party chair Lloyd Russell-Moyle is standing for Labour while the Tories are fielding David Plant, who grew up in Whitehawk, a key part of the ward.