Weeks, 36, who went to Roedean School, in Brighton, in the 1990s and played Sam in the ITV wartime drama, disappeared last night, according to Sussex Police.

Detective Sergeant Kate Witt said: “We are concerned about Honeysuckle as her recent behaviour has concerned family and friends and she has expressed to them she is feeling anxious.
“Although she travels around a lot and has links in London and has family in Wiltshire, it is unlike her not to be in touch with family.

“If you read this, Honeysuckle, please get in touch to let us know you are ok.” 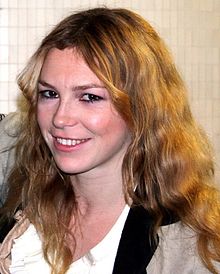 Sussex Police said: “She is around 5ft 4in, with cropped gingery blonde hair. She was last seen wearing a blue anorak and faded blues jeans.”
She vanished from Graylingwell Drive, close to the Chichester Centre, a low-security psychiatric centre in Chichester, at about 9pm last night and was reported missing an hour later.

The Chichester Centre is a purpose-built hospital for people who need rehabilitation and treatment within a secure environment.

Sussex Partnership Trust, the NHS mental health trust that runs the centre, said: “If you are in the low-secure service, you will have either committed a criminal offence or have significant challenging behaviour that requires a higher level of security than can be provided in mainstream adult mental health services.

“We aim to help you understand and manage your mental health so that, where possible, you can get back into the community.”

The actress, who studied English at Pembroke College, Oxford, had a rebellious youth and dated Hugh Grant in 2000.

The married mother of one, from Petworth, West Sussex, was ordered to wear an electronic tag and obey a night-time curfew earlier this year for driving while disqualified. Police caught her speeding in a BMW with a child in the back.

She claims she once fed cannabis-laced mince pies to her unsuspecting parents and married hypnotherapist Lorne Stormonth-Darling in a Buddhist ceremony in the Himalayas in 2005.

Weeks has appeared in a number of films and TV productions but is best known for her role in Foyle’s War as the well-to-do driver to Michael Kitchen, who played the title role, Detective Chief Superintendent Christopher Foyle.