BHASVIC has again achieved the highest number of A-level passes in Brighton and Hove, with almost 3,000 graded from A* to E.

The pass rate at Brighton, Hove and Sussex VI Form College was 99.1 per cent, with more than three in five at A* to B and almost one in eight at A*.

The college, in Dyke Road, Hove, said: “Students and staff at BHASVIC are celebrating an outstanding set of results this year with an A-level pass rate of 99.1 per cent.

“The number of A* to B grades achieved at A level is 62.7 per cent which is a fantastic achievement for an institution that prides itself on being ‘open access’ and non-selective in the students it takes. Prospective students can study three A levels here if they have achieved six GCSEs with a mixture of A* to C grades in at least four different subjects and including English language and/or maths.

“The pass rate is up by 1 per cent on the previous year and means that the vast majority of students are celebrating successful outcomes from the nearly 3,000 A-level exams taken (with) 12.1 per cent of outcomes graded at A*.

“All headline outcomes were considerably higher than the national average. 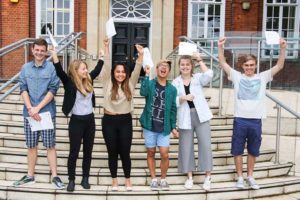 “Thirty seven students had received offers of places at either Oxford or Cambridge prior to results day, with many other students taking up places on the most competitive courses in higher education.

“Results for vocational qualifications are equally (if not more) impressive. These courses achieved a 100 per cent pass rate, with a phenomenal 88.2 per cent at distinction or above.

“These results cement BHASVIC’s position as one of the best sixth form colleges in the country, which on similar outcomes from the previous year saw the college ranked in the top three sixth form colleges nationally on both raw results and value added data.” 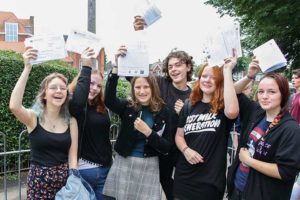 New principal William Baldwin said: “I am delighted to be taking up the position of principal at such an outstanding college.

“These results reflect the determination and hard work of our students and the dedication and professionalism of all staff here at BHASVIC.

“Parents and our partner schools must also get credit and thanks for their input into these results.

“They are testament to the learning culture that has been created here at BHASVIC and are evidence that students who come here have every opportunity to fulfil their potential.

“BHASVIC really is changing lives through learning. Congratulations to all our students – whether they are going off to university, gap years or into the workplace – we wish them the best of luck for their future.”