A Brighton commuter experienced the ultimate Southern Rail delay when her compensation vouchers turned up so late they had expired. 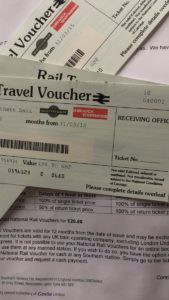 Laura Grant, 35, got so fed up of the commute to London she eventually quit her job in the city and found a job nearer to home.

Before that, she had got into the habit of claiming compensation from Southern under the delay repay scheme but applied for so many she lost track of which ones had been successful.

So it was a surprise – but not entirely a shock – when two vouchers totalling £26 turned up this week 19 months late – and no longer valid.

Laura said: “At the time I was making quite a lot of applications for compensation and I can’t remember the exact journeys, but it was two full refunds so they would have been delayed for more than an hour each.

“It could be that it got lost in the post, but hopefully I will be able to get the money back from Southern.

“I wasn’t surprised – knowing what Southern are like. I know at the time there were a lot of delays so I was getting a lot of the claims back so I wasn’t keeping an eye on the ones that weren’t.

“I work as a travel consultant and the trains were one of the main reasons I stopped commuting, because of the delays.”

A Southern spokesman said: “This looks like a case of lost in the post! We sent the voucher in plenty of time, so we’re at a loss as to why it took so long to get to the customer.

“However, we have been in touch with her and reissued the voucher – along with an apology.”