One of Brighton’s best-known graffiti sites is to be turned into 12 “affordable” homes for rent by Brighton and Hove City Council.

Members of the council’s Planning Committee granted formal permission for the scheme at a meeting this afternoon (Wednesday 9 November).

Three houses and nine flats will replace three rows of parking spaces in Kensington Street in the North Laine area. The homes will go to people on the council’s waiting list.

The committee meeting at Hove Town Hall was told that the graffiti would be recorded with members noting that it had become a tourist attraction in its own right.

The housing proposal is part of the council’s New Homes for Neighbourhoods programme which has a £34 million capital budget this year and next. The aim of the programme is to build 500 affordable homes on council-owned land. 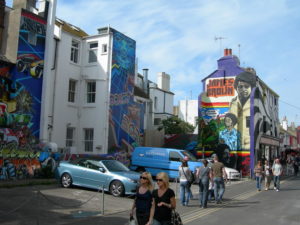 Councillor Lee Wares said: “This is a great looking scheme in a very tight spot.”

He praised the compromises that had been made to ensure people would be able to live in the much-needed new homes at this site and elsewhere.

He pointed out that although the tolerated graffiti site was being lost, his colleague Councillor Robert Nemeth had been involved in enabling similar work at Hove Lagoon. 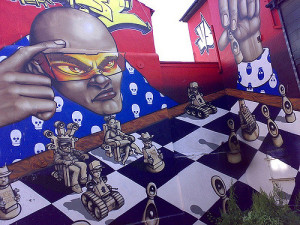 Councillor Julie Cattell, who chairs the Planning Committee, praised the designers of the new homes. She said: “It’s a difficult site to develop and I think they’ve done an amazing job.”

Councillor Cattell said: “In approving this application we will be able to create vital new homes for local people on brownfield sites in a central sustainable location.
“It also means the holes in these traditional terraces will be filled, improving the look of the street, bringing new life and enhancing the conservation area.”

The council said: “The two and three-storey buildings would be of contemporary design but with an appearance reflecting the surrounding North Laine Conservation Area.

“Each would have high levels of energy-efficiency with triple glazing and ‘heat recovery’ technology, which reuses warmth otherwise lost through ventilation.”