The “outstanding” Sussex Beacon faces closure as a result of NHS funding cuts, with the prospect of the Brighton charity shutting up shop in six months’ time.

The Beacon, which cares for hundreds of people living with HIV, has made a desperate plea for help to survive.

Along with the Labour leader of Brighton and Hove City Council, Warren Morgan, they have written to the Health Secretary Jeremy Hunt to ask him to intervene.

“The trustees have regretfully concluded that the charity is facing the very real risk of closing its services which, if it happens, is likely to occur next June.

“This is devastating for both our service users and our amazing team of staff and volunteers.

“Our primary focus will be on supporting them in the coming months and looking for ways to avoid closure of services.”

Simon Kirby and Jeremy Hunt at the Sussex Beacon

The charity said: “The Sussex Beacon is facing the prospect of closing services, including its ten-bed inpatient unit, following a reduction in the funding it receives from the NHS.

“The Sussex Beacon provides specialist support and care for people living with HIV through both inpatient and outpatient services.

“It helps hundreds of people living with HIV in Sussex each year and was rated ‘outstanding’ by the Care Quality Commission in September.

“Changes to local commissioning arrangements have led to a reduction in statutory funding.

“The Sussex Beacon has already lost funding and further cuts seem likely in the future.

“The charity costs over £2 million a year to run and cannot continue to absorb the budget cuts.

“While many people living with HIV are now able to live long and healthy lives, there are still many who need specialist services.

“Last year the Sussex Beacon’s inpatient unit had 233 admissions and was full for the majority of the year. 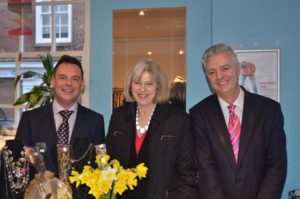 Simon Dowe with Theresa May and Simon Kirby

“It provided over 2,000 bed nights, relieving pressure on both health and social care services in Sussex.”

The charity’s management and trustees said that they had made and would continue to make every effort to put the organisation in a stronger financial position.

They were, they said, liaising extensively with commissioners, making numerous internal savings and increasing their community profile.

The Beacon said: “Trustees are prepared to consider all options for the future including how the charity might be redesigned.

“They will look at other ways the Sussex Beacon can work in the HIV sector, perhaps in partnership with other local organisations or as a grant-giving body.

The Beacon’s chief executive Simon Dowe said: “From its beginnings in 1992, primarily as a hospice, the Sussex Beacon has adapted with the epidemic, now helping people with HIV to live long healthy lives with the condition.

“As chief executive, I’m very proud of the support we offer people and of the affection the charity is held in locally.

“If we are forced to close, I think it will be a real loss to our community and the decision heartbreaking for not only our staff but also many of our service users and supporters.”

The recent loss in funding was from a contract with High Weald, Lewes and Havens Clinical Comissioning Group (CCG), Eastbourne, Hailsham and Seaford CCG and Hastings and Rother CCG.