The force said: “Police are appealing for witnesses after two men robbed the Co-op store in Old London Road, Brighton, at knifepoint.

“They went into the shop at 9.55pm on Friday (16 December) and threatened staff with a large kitchen knife, demanding they hand over cash from the safe.

“They also grabbed cash from the tills, stealing around £2,500, and ran northwards along Old London Road.”

Detective Sergeant Cheryl Lewendon said: “This was a particularly nasty robbery whereby the suspects forced the staff into another room by brandishing a weapon at them and used fear to hold them there in order to steal cash from the store. 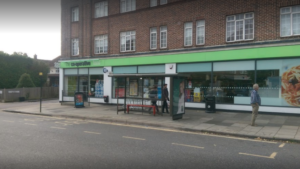 “The staff were unhurt but shaken by their ordeal and we are keen to speak with anyone who may have been a witness or have any information that may assist in identifying these men.”

Both men were white and spoke with Irish accents, Sussex Police said.

The first man, holding an 11in knife, wore a black hooded jacket with the hood up, a black jacket over the top, black tracksuit bottoms, black boots and a black scarf over his face.

Any witnesses or anyone with information is asked to phone Sussex Police on 101 or email 101@sussex.pnn.police.uk quoting serial 1494 of 16/12.