Property company Redevco has paid £72 million for the premises that were once Hanningtons department store in North Street and East Street in Brighton.

The company has just splashed out more than £14 million for 38 to 42 East Street, the premises next to the original Hanningtons estate which it bought last year.

The new addition currently houses five shops – Maje, Sandro, Estée Lauder, Lush and Pret A Manger – and offices and flats on the four floors above.

“We are transforming the Hanningtons estate, a historically important retail destination, and creating a new Brighton ‘Lane’ over the next two years.

“These investments will greatly improve the shopping experience in this area for residents and visitors to the city.” 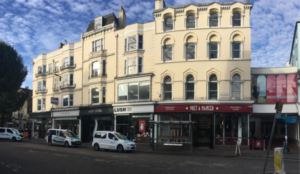 Redevco said: “Located in the heart of Brighton near the seafront, the Lanes quarter is a network of narrow alleyways and lanes that is home to an eclectic mix of boutiques and independent retailers.

“This makes Brighton a magnet for visitors seeking a ‘shopping experience’ and places it third for location demand by retailers among UK urban centres.

“The city has a primary shopping catchment area of 476,000 people, including a large student population, and a wider market of 750,000.

“Nicknamed ‘London on the sea’, Brighton attracts around eight million visitors annually who spend an estimated £410 million a year.

“Brighton also ranks 11th in the UK and 45th among cities in Europe as a ‘very good’ retail experience destination in Redevco’s ‘City Attractiveness’ research analysis.”

He studied at Oxford University but was apparently unsuited to business life and became a clergyman. Bishopo Hannington Memorial Church, on the corner of Holmes Avenue and Nevill Avenue, in Hove, is named after him.